Lots of sketchy characters on 35th St lately. They sell “something” on the street, they hang out at the rbc. Usually 2 women ( 1 tall, thin, blonde ad the other stout and rotund and grey/blonde both in their 40’s?) They make a great deal of noise while they walk down the street in the middle of the night… 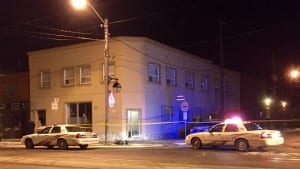 Image from CP24 news report, Jan. 19, 2016: One man, believed to be in his 20s, suffered critical injuries following a shooting in Etobicoke overnight. (Mike Nguyen/ CP24)

This morning saw an old small grey car (like a K car) with licence plate covered in dirt with 4 young guys in it, driving slowly along 38th Street, James Street and 37th Street this morning at around 8:25-:30am, the passengers were looking at every house. I pretended to take a photo of them when they saw me (phone wouldn’t turn on), they sped away towards Lake Shore Blvd W.

There’s been so many house break-ins lately, I hope everyone leaves their home secure before going to work. Called 22nd Division. 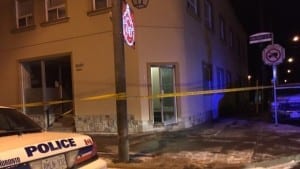 Image from Jan. 19, 2016 CBC article. Caption reads: Police have taped off the corner of Lakeshore Boulevard and 11th Street for the shooting investigation. (Linda Ward/CBC)

A Jan. 19, 2016 CP24 article is entitled: “Man critically injured after shooting in Etobicoke.”

A Jan. 19, 2016 CBC article is entitled:
“Etobicoke shooting sends 1 man to hospital in critical condition: Police say a man in his 20s was shot in the stomach.”

Beware the occupancy probe knock – Message from Toronto Police Service,... Yiyun Li (2014) and Luigi Tomba (2015) each notes, each in her or his own way,...
Scroll to top