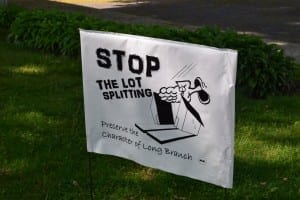 The signs are not a project of the Long Branch Neighbourhood Association (LBNA). Jaan Pill photo.

In a previous post, I have highlighted points of view regarding anti-severance lawn signs in Long Branch:

What impact would lawn signs have on development issues facing Long Branch (Toronto)?

The gist of the post is that the lawn signs are the initiative of a group of Long Branch residents. That is, the signs are not a project of the Long Branch Neighbourhood Association.

At the above-noted post I’ve included my own perspective, regarding the ongoing discussion. In the Comments section of the post, I have added a couple of other perspectives.

“I think that it is important that the public know that these signs are not being provided by a community organization – specifically the LBNA. While many who take signs might be members of this organization, in my opinion it is not its role to take political stands. I believe the misperception that it is providing these signs could be quite destructive as it takes its first steps. In fact I believe that active steps need to be taken to prevent this misperception. There may be others who believe that the LBNA should be taking political stands, but I don’t believe that a the organization has made a decision either way – therefore, misunderstandings are to be avoided.”

“I agree completely with [comment three] and raised this as soon as the initial sign discussion came up‎. It needs to be very clear ON THE SIGN whose initiative this is.”

“If I were to pass one of these signs on the street, I would not assume that it came from LBNA if it didn’t say so. A new org like LBNA would very likely want the recognition if it were its initiative. I could be wrong because of the timing of the signs and ‎coincidental infancy of the association.

“Let’s give credit to neighbours that pushed it forward…. ‎Glad to see neighbours taking action on their own volition.”

In previous years, Long Branch has given rise to a short-lived community association known as the Ratepayers Association of South Long Branch  (RASL).

Based on a study of the website that the latter association had in place, my sense is that RASL was solely devoted to the stopping of severances in Long Branch. It was also focused solely on the southern part of Long Branch, namely the part of Long Branch that is located south of Lake Shore Blvd. West.

RASL did not attract a large number of members; it has faded from the scene.

The Long Branch Neighbourhood Association seeks to represent all residents of Long Branch – including owners of detached and semi-detached houses, renters, and condo owners – and to address a broad range of issues, of which severances are one topic of interest among many others. Committees have been formed, to initiate work related to a wide range of topics, and a General Meeting is on the horizon, as a follow-up to the initial launch meeting and a series of well-attended meetings of a provisional organizing committee.

The official means of communication, related to the work of the Long Branch Residents Association (LBNA), are the LBNA website and statements made by the leadership of the association.

It’s my strong belief – based on what I have observed first-hand – that the process, whereby the LBNA has been launched and is being developed, is of the highest quality. A wide range of residents, representing a wide range of skills, interests, and points of view, are involved with the launch of the Long Branch Residents Association. The ongoing discussion, regarding lawn signs related to severance issues in Long Branch, is of much value.

The underlying message, which I think is important to communicate widely, is that the lawn signs are an initiative that is separate from the work of the Long Branch Neighbourhood Association. The presence of the signs gives rise to a wide range of points of view. It is of value, I believe, for residents to be aware  of the wide range of points of view which are available, regarding the topic of lawn signs and related topics.

Ideally, what you want, at least based on my experience with groups over the past thirty years, is a situation where all members of an organization feel a sense of ownership of the organization, and a strong sense that each member can contribute in a meaningful way to the decision-making process. My sense is that such conditions are indeed in place, in the emerging structures of the Long Branch Neighbourhood Association, now in its early, crucial stages of development.