David Godley refers to an exchange of emails that, David notes, “confirms the Planning Department’s position.”

“The main recommendation to defer for community consultation is fully supported,” he notes.  “However they have a phrase in the body of the report which says ‘no further concerns.” On this we will have to agree to disagree.”

“I can assure you that without assistance from the Planning Department in the past Long Branch would be much more devastated than it is now.

“As you will see from the attached comment to the Committee of Adjustment I am still perplexed.” 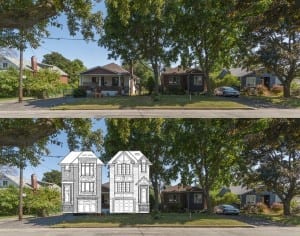 The Photoshop overlay regarding 9 Meaford Ave. is from David Godley.

The full text of David Godley’s comment to the Committee of Adjustment regarding 9 Meaford Ave, reads:

I support Deferral as recommended by the Planning Department.

I note in the body of their report (last para.) dated May 31st 2016 that it is mentioned that they have “no further concerns”. I believe this to be a planning error. Otherwise the report has considerable implications for Planning in the whole of Etobicoke/ East York and perhaps for the City as a whole.

That is because the Department would be making a 180 degree switch from all their comments on similar applications for twin 3 storey soldiers on 25 feet frontage in single family only zoning. All their evidence at hearings has been exactly the opposite.

This applies to the approximately 20 applications that fall into the same category. All were opposed by Planning and none was supported. This includes 2 27th Street which was approved by the OMB with the devastating loss of 9 mature and healthy trees and 168 Lake Promenade where the overpowering nature of the development blocked sun, light and views along nearly the whole east side of the rear yard of the abutting property to the west. The owner emigrated!

Meaford Avenue is similar to Shamrock Avenue where the Planning Department was vigorous in opposing development. The whole character is transforming because of the OMB. Meaford Avenue is quieter, more trees and lower profile than Shamrock and thus more sensitive to change.

All the initiatives for conserving the character of Long Branch such as the Urban Design Guidelines, Community Forums, and working with the Neighbourhood are contrary to the “no further concerns” phrase.

I am aware of the machinations of both the Official Plan and Amendment 320 and it is clear that the general intent in both was to stop the type of development in the applications proposed in lower density neighbourhoods. The statements in the Official Plan are misconstrued by development planners who are in conflict of interest situations. The wording of OPA 320 is even clearer where it says development must reinforce existing character by looking at the most frequently occurring nearby massing and scale – a simple clarification of prevailing and predominant.

The zoning was changed in an attempt to eliminate 3 storey houses by limiting the height of the front exterior main wall and the maximum height of the first floor, both exceptions in the subject variances.

“No further concerns” also puts Community Development at the opposite end of the spectrum to the Department’s own Urban Design Section.

Consistency by the Planning Department gives credibility to their comments.

Foreign to me is the notion that the information and the opinions of the impacted residents and the broader neighbourhood are not part of an analysis of a complex proposal. Policy is built up from the grassroots and blended with overall Citywide policies. The same with applications on a par with the complexity of zoning applications which have mandated community meetings prior to Planning Department reaching conclusions.

A red herring seems to be becoming part of Planning Department thinking. We are hearing that the new building within the building envelope of the zoning is somehow justified. This has nothing to do with the conformity with the Official Plan. Once a variance is submitted it is the policies of the Official Plan which must be observed for the specific proposal especially as “substantially the same” conditions are required. Having building envelope override the Planning Act is an argument I have not heard development planners use – yet.

Professional elitism is at the heart of the failure of the OMB. Planning is both a science and an art. Therefore experts are heavily influenced by their own values and their situation. So called experts in planning should not necessary outweigh those of neighbourhood people in my opinion. We need hearing officers who have a sound understanding of planning including urban design to have rational judgments.

Over time severance and variance applications have become more extreme and larger. We currently have applications for 5x floor space index where 0.35 is required and semis in single family zoning only. At the same time the OMB has become increasingly enamoured with so called planning experts.

Fortunately and belatedly the OMB are changing their tune and saying that where proposals are of lesser width than existing frontage widths or have more storeys than other houses they are not within the parameters of character and provide precedents which will transform streets to be unrecognizable.PL 151145 and 150665.

The most devastating attack on the character of Long Branch is from 3 storey twin houses each on a 25 feet wide lot. This has created anger and anxiety in the neighbourhood due the helplessness and frustration of the current process where citizens are sidelined.

Residents moved into Long Branch because it is historic, leafy, charming, quiet, lower density with plenty of green around the houses. It offers a unique quality of life. It is gradually being turned into a banal type subdivision with no character of its own. Those who are directly affected show their love of the neighbourhood through protest but the system does not allow them to follow through on the Official Plan to conserve character.

Planning Process for Review of Severances and Variances

A brief check list of matters to consider for these applications are:

1) Why cannot development be built under current zoning. (Application Form)

2) Does the proposal comply with the City’s definition of minor.

“Small changes or exceptions to existing land use or development restrictions contained in the zoning bylaw are called minor variances.”

3) Are the variances small in size (De Gasperis) as well as impact.

4) Is the development desirable for the appropriate use from the public interest point of view.

5) Is the general intent of the zoning achieved particularly the ordinance to limit first floor height to achieve 2 storeys and a sense of scale similar to existing and double the density with about double the massing..

a) Does the proposal reflect “respect and reinforcement character” as repeated in the OP a dozen times.

b) Is change gradual, harmonious and sensitive.

c) Can Long Branch, as the severance capital of Toronto, be considered stable now because of all the inappropriate development that has been approved by the OMB over the Planning Department and Committee of Adjustment position. Can it even be stable with the current process of eliminating those impacted from influence.

d) Does the proposal reflect Policy 2 of the OP that conservation of character trumps density and demand.

g) Is the Official Plans clarification in OPA 320 (City Policy) that conservation features are prevailing, predominant and most frequently occuring.

7) What is the opinion of the most severely impacted residents, the nearby residents and the neighbourhood as a whole.

The answers to the checks all appear to be no.

The applicant has provided no contextural information. The attachment gives some critical information not yet included in Planning Department’s comments. More is forthcoming from the residents.

An outstanding issue is that there has not been a study to evaluate ground water capacity. All properties south of Lake Shore are subject to significantly increased insurance rates to allow for basement flooding damage. This has not been taken account of by the Engineering Department. Continued reduction of rainwater absorption will only exacerbate the situation. A study is being initiated by the Councillor’s Office.

From my dealings with the Planning Department I am convinced they are concerned what the neighbours think about the quality of the street and that they prefer to live in historic, treed, characterful and vibrant neighbourhood. Therefore their phrase “no further concerns” is not congruent.

They have initiated the Urban Design Study for Long Branch which stemmed from concerns about exactly this type of development and is intended to clarify local interpretation of appearance.

In future the market bubble is likely to burst or a tax will be levied on foreign owners to bring down the inflated price of land. Long Branch does not want to look like a row of bad teeth and be quoted in educational texts as an example of where planning went wrong in the second decade of the twenty first century. If the subject phrase is unintended then it is like a dagger in the side of Long Branch. I am hopeful that all will get back to normal with the planning and the Planning Department.

The matter should be deferred to have a community consultation to bring the proposal into conformity with the various tests. After the Community Forum the Planning Department can then review their initial conclusions with the benefit of community participation. If no consultation is held with the public, the application should be refused.

3. New development will be massed and its exterior façade will be designed to fit harmoniously into its existing and/or planned context, and will limit its impact on neighbouring streets, parks, open spaces and properties by:

a) massing new buildings to frame adjacent streets and open spaces in a way that respects the existing and/or planned street proportion;

b) incorporating exterior design elements, their form, scale, proportion, pattern and materials, and their sustainable design, to influence the character, scale and appearance of the development;

c) creating appropriate transitions in scale to neighbouring existing and/or planned buildings for the purpose of achieving the objectives of this Plan;

e) adequately limiting any resulting shadowing of, and uncomfortable wind conditions on, neighbouring streets, properties and open spaces, having regard for the varied nature of such areas

David Godley adds that 2 Shamrock is coming up at the 4 August Committee of Adjustment meeting.