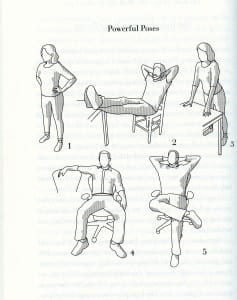 Powerful Poses. Click on the image to enlarge it. Source: Presence: Bringing Your Boldest Self to Your Biggest Challenges (2015) by Amy Cuddy (p. 200)

Forty years ago in Toronto – in the mid-1970s – I spent a year and a fair amount of money in the intensive study of a variation of the Alexander Technique.

I really needed the training. I was born slouching. I had the appearance of a person that life had beaten down.

Like many other things that I got involved in during the years that followed, those lessons changed my life.

For one thing, my rib cage expanded remarkably in size as though someone had filled a half-filled balloon with air. What a difference that made. Pretty much everything about me changed – especially in my encounters with people who had not known me previously. 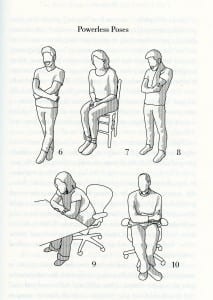 Powerless Poses. Click on the image to enlarge it. Source: Presence: Bringing Your Boldest Self to Your Biggest Challenges (2015) by Amy Cuddy (p. 201)

My posture and bearing – even how I walked and certainly how I sat – went through very considerable changes. My way of looking at the world also changed – as did the infrastructure of emotions that I brought to bear, in my day-to-day dealings, with the stuff of everyday life.

For several decades, in the years that followed, I was involved as a leader in volunteer work in which public speaking at large meetings, and media interviews, were a key part of my work. My posture made a huge difference in how I approached my role. Figuratively and literally, I stood straight and I stood tall. Had I been slouching all the time, I would not have been able to achieve what I did – in a form of volunteer work, at the local, national, and international levels, that I like to call community self-organizing.

The work that I began those many years ago continues even now, long after I had retired from a leadership role, because from the start we made the concept of leadership succession and continuous improvement a key part of the process. 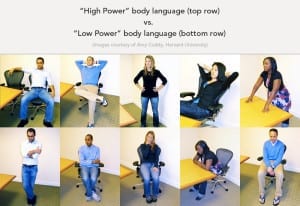 A version of this collection of poses (that is, a series of drawings of the poses) appears in Cuddy’s book, Presence: Bringing Your Boldest Self to Your Biggest Challenges (2015). Click on the image to enlarge it.

With the passage of the years, however, I was starting to slouch once again, as I had done in my teenage years – but since getting involved, over the past year, with serious strength training, and high-intensity interval training, my posture is now once again in pretty good shape.

I mention these topics because some time back I began to read the work of Amy Cuddy. In particular, I’ve made a close study, over the past summer, of an article by Cuddy et al. (2008) concerned with research about stereotyping. I’ve devoted a post to the research that I was most interested to read about this summer:

In exploring what other work Amy Cuddy, who teaches at Harvard Business School, has done, I’ve read an article in The HBR List: Breakthrough Ideas for 2009 (2009), which features an article by Cuddy entitled: “Just Because I’m Nice, Don’t Assume I’m Dumb.”

The article takes the findings cited in the Cuddy et al. (2008) paper, and applies them to some practical scenarios. It’s worth a read. You can borrow the book from your local library. The gist of her message is: Don’t make the mistake is using stereotypes to make snap judgements. She also says (p. 13) that forming impressions isn’t a zero-sum game: “Warmth and competence aren’t mutually exclusive.” The latter point is also underlined in the title that was chosen for the article.

Presence: Bringing Your Boldest Self to Your Biggest Challenges (2015)

Cuddy is also the author of Presence: Bringing Your Boldest Self to Your Biggest Challenges (2015) and a YouTube video entitled: “Your Body Shapes Who You Are”:

I would notice things about my own posture, and about the posture of other people, that I would not have observed before.

I also became interested in research that focused on linking forms of body language – for example, how a person walks – with emotional states. In those days, the research was pretty rudimentary, but many researchers did have a strong interest in pursuing this line of research in any way that was possible. I’ve been delighted to learn about how much progress has been made in this area in recent decades.

In reading Cuddy’s 2015 study, I was most interested to learn how far this form of research has advanced. By way of example, she refers to the work of Niko Troje at Queen’s University; the following video gives a brief overview of his work:

You can learn more about Troje’s work by visiting the Bio Motion Lab website.

I’m also pleased, in concluding this post, to share with you a link about the Alexander Technique.

In conclusion, my advice is: Stand tall.

Getting back to the Alexander Technique, that is harder to do than it sounds, unless you learn how, because to make it work – to really stand tall – you need to learn to relax some key parts of the body, such as the back of the neck, where tension can build up from day to day, and indeed from year to year, in many of us.

Among other things we are dealing with stereotyping.

A Nov. 3, 2016 Language and Cognition article is entitled: “Power in time: The influence of power posing on metaphoric perspectives on time.”

A Feb. 14, 2017 Science of Us article is entitled: “Rich People Literally See the World Differently.”