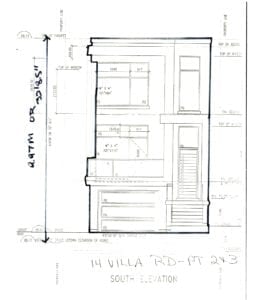 A drawing of one of the two, 3-storey buildings proposed for 14 Villa Road in Long Branch (South Etobicoke, Toronto). Each building measures almost 33 feet tall at the front. Click on the image to enlarge it.

On the right is a drawing of one of the two buildings proposed for 14 Villa Road.

1. Guide to the public hearing Notice

A resident on Villa Road has noted the document, which is from the Long Branch Neighbourhood Association, is a a bit lengthy but it explains the meaning of the variances. You can access the document here:

2. Things to think about: Specific comments for residents close by plus those farther afield

“I found this quite informative. These are mostly reformatted copies of what was prepared for a previous hearing and passed on to us,” the Villa Road resident notes.

“They contain a lot of valuable info, especially for the more detail-oriented.” 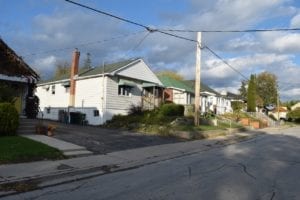 The contents of the two PDF files are featured at separate posts:

I have posted the contents of the above-noted PDF files as two, separate posts:

If you receive a Notice from the Committee of Adjustment, here’s a Guide to the Notice

If you receive a Notice from the Committee of Adjustment, here are specific comments for residents close by plus those farther afield

The OMB took this 9 Meaford Ave. photo montage as evidence; Committee of Adjustment rejected it out of hand

Also of relevance: I am aware of an anecdotal report that one of the employees, involved with a June 2017 demolition, was alleged to have threatened some nearby neighbours. I would suggest that such incidents be reported to the Toronto Police Service, 22 Division Non-Emergency Number:  416-808-2200. You can also contact 22 Division by email.

It may also be noted that the 22 Division Community Response Office is at 416-808-2219. The Officers assigned to Long Branch are:

Please refer to the 22 Division website for further details.

It’s important to document threats or property damage. Write down, as soon as possible, what has been said, and the circumstances including names of witnesses, if any. If there are no witnesses, share with another person or persons what has happened, and make a note of when you have shared the information.

Written documentation, created at once or as soon as possible after the event, has much more value than vague recollections. In the case of property damage, take photos at once.

Ontario Municipal Board (OMB) Review – Town Hall Meetings in Etobicoke,... If you receive a Notice from the Committee of Adjustment, here’s a Guide...
Scroll to top