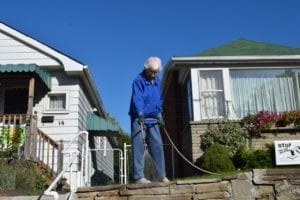 Dorothy, who appeared at the Committee of Adjustment on November 3, 2016, lives just east of 14 Villa Road. She has lived at her house for 74 years – three-quarters of a century – as she has explained in a widely viewed online video entitled: Message from Dorothy, age 97, to the Etobicoke-York Committee of Adjustment, October 2016. Jaan Pill photo. Click on the image to enlarge it.

Details about the OMB Review are available at this link:

1) Tomorrow, December 19, 2016 is the deadline for comments from Ontario residents regarding the OMB Review.

Please make an effort to send some comments in, whatever comments occur to you, by the deadline. In volunteer work, as in most aspects of life, we follow the 20-80 rule. That is, 20 percent of the people, in pretty well any group of volunteers, do 80 percent of the work. It’s my hope that you will be among the 20 percent. This is a general law of life: 20 percent of research papers account for 80 percent of citations. And so on.

2) Where to send your comments? You can send comments, regarding the OMB Review that the Ontario Government has initiated, to OMBReview@ontario.ca as an email.

There’s a suggested format – a series of about five topics – that residents can address, or they can simply choose their own format. You can find details about the OMB Review here:

OMB Review – How to Participate

3) I’ve included at this post a link to our Dorothy video, that we made regarding Villa Road, as I think it’s a fun thing to focus upon, from time to time. Dorothy has been a key player in getting City TV interested in the Long Branch story, and I’m hoping we can get other media involved in this great story in the future, as well. We owe thanks to Laura, another active, communbity-minded Villa Road resident, for initiating the contact with City TV. Laura, we owe you many thanks!

As a volunteer, I’ve been involved in media relations for 30 years. I love this aspect of volunteer work. In this case, with Dorothy’s (and Laura’s) help we have a great story, and our media strategy is an ongoing focus of my own, small contribution to the volunteer work, that we’re all doing together. In media work, we have what I would call the 2-98 rule: For a given media campaign, 2 percent of the media contacts, that we establish, account for 98 percent of the media coverage. Which is another way of saying: Be persistent, have a focused strategy to guide your way.

4) If you can’t formulate, at this point, any OMB Review comments in particular, one way you can, if you wish, help us out tremendously is by taking the following text, which I have prepared for a draft of my own comments. That is, if you don’t have time to fill out the online survey, you can always send in an email.

My own message, or the gist of it

My key message (which you may wish to adapt and then send in as an email) is roughly along the following lines:

2) I support the concept that Minor Variances should be clearly defined, in numerical terms. In that way, what constitutes Minor would not be a subjective matter, for Committee of Adjustment and OMB to decide, on a whim, that is, on subjective terms, in which the decision-makers appear to be winging it, rather than following some understandable logical procedure.

3) I support the recording, by residents, of OMB hearings.

One of the things I’m really interested in, and that a number of people have mentioned with regard to OMB, is that it would be great for residents to have the option of openly recording (that is to making digital audio recordings of) OMB hearings.

It would be great if the same recording option would be available at Committee of Adjustment and Local Appeal Board meetings.

Posting, at community websites, of the transcripts of such hearings – or accurate and balanced news reports based on such hearings – on the part of residents with skills in such a time-intensive form of volunteer work, would be very helpful.

As things currently stand, what actually occurs at such meetings, minute by minute, remains unknown to the wider public, and can generally only be shared by way of anecdotal evidence.

There is much to be said for an evidence-based approach to what actually occurs at these meetings.

Some of what gets said at the Committee of Adjustment and the Ontario Municipal Board is truly unexpected and not what a person would expect to be hearing, at such a meeting. Among other things, residents are habitually subjected to insults.

The details of what occurs are typically not reported by regular news media, as there is not a business model in place for regular media that would make such detailed reporting economically viable.

Volunteers in the wider community could readily work together, as volunteers, to report on such meetings. All that’s required is a coordinator and a good supply of volunteer labour.

In a nutshell: As citizens, we are both consumers and producers of news. News is too important to be left solely to traditional news media.