The above-noted post provides an overview of the three above-noted elements. In a comment at the post, I’ve referred, as well, to a fourth element, which has to do with the distinction between frontstage and backstage behaviour, as the latter terms are defined by the social psychologist Erving Goffman:

4. Things not be as they seem: Backstage and frontstage

Storytelling is also about how things are not be as they seem. We are dealing with discovery – with a process of uncovering. Of finding something surprising – something other than what we initially expected. Our brains are wired for surprises.

That is, what is the backstage reality, given that we initially know only the frontstage?

How do we separate the fact from the fiction, the rhetoric from the reality? What clues are available, to help us on our way?

Now, when we take a backstage view of things, and bring it to the frontstage, the dynamics of the “definition of situation” that Goffman speaks about in The Presentation of Self in Everyday Life (1959), is altered.

A person can speak of this as backstaging – a form of inquiry that has similarities (but is not identical with) reality tourism.

So, what happens when we take what we have learned, on a visit to a backstage, in one or another form of reality tourism, and bring it to the frontstage? What happens, thats is, when we engage in backstaging, by way of bringing the backstage into the open?

The Presentation of Self in Everyday Life (1959) addresses such issues in a solid, but in some senses preliminary, way. In the event a person seeks to explore the underlying issues at further depth, a useful resource is a subsequent study by Erving Goffman, entitled Frame Analysis: An Essay on the Organization of Experience (1974).

By way of example, with regard to backstaging, contemporary (February 2017) news accounts indicate that the White House is now actually Arkam Asylum. The real shock is going to happen when the current US President escapes the backstage of the White House and ventures forth.

A related topic concerns the malleability of memory. With regard to this topic, a Feb. 9, 2017 Aeon article is entitled: “Telling memories: Jewish émigrés from the former Soviet Union tell inconsistent stories. What does this say about the nature of memory?”

The malleability of memory discussed at length at a post entitled:

The Oxford Dictionary defines reinhabitation as: The action or an instance of reinhabiting a place.

The performance of reinhabitation through narrative is a key element of storytelling. Metaphorically, at any given time and place, we can celebrate the fact that “the people make the place.”

As well, reinhabitation is a re-occurring phenomenon. It’s more useful to talk about re-inhabitation of spaces than it is to talk solely about the significance of artifacts.

At all times, we need to re-orient ourselves to the present moment, to the here and now. By way of example, it’s a commonplace observation that each generation addresses history anew; each generation brings a new mindset, and a new set of unearthed artifacts and archives to the surface, and gets to work on creating its own generation of history.

As well, each socio-economic level of society creates its own version of history.

A recent post, one of a series of posts about postwar housing in Canada, is entitled:

The research methodology that Annmarie Adams and Pieter Sijpkes have adopted is of much interest:

“Our study offers no typology of architectural change; at least three other studies of wartime housing in Canada have fulfilled that objective. [7] We focus, rather, on a smaller sample (25 case studies) in much more depth and employ methods more commonly used in the fields of anthropology, cultural geography, and folklore than in traditional architectural research. Instead of focusing on formal analysis, that is, this project assumes architecture as a dynamic process and grants building users agency in the shaping of their own spaces. [8] Architecture as imagined or constructed by its designers is only a starting point for such analyses.

“Folklorist Michael Ann Williams has described this methodology (par­ticularly the use of oral testimony) in the study of domestic space as a”reinhabitation of the house through narrative” and has suggested that the richness of this case­ study approach may call into question the usefulness of studying buildings as artifacts. [9] Following this thinking, we hope our research contributes to a growing understanding of the do-it-yourself home improvement industry in Canada, and, more generally, to the study of vernacular architecture.”

Shelter for Victims of Environmental Disasters (1991)

I was pleased to learn that Annmarie Adams and Pieter Sijpkes are contributors to a study entitled: Shelter for Victims of Environmental Disasters: Charrette, École d’architecture de l’université McGill, 25 & 26 février 1991 = McGill School of Architecture, February 25 & 26 1991.

An additional feature that characterizes a good story is a quality of open-handedness. Two examples, or what I have in mind, are:

That is, an element of ambiguity, of multiple meanings – that is, an evocation of input from the reader, listener, or viewer – is a key element or feature of a good story.

A related storytelling concept is scenario planning, as described in a Feb. 3, 2017 fivethirtyeight.com article entitled: “14 Versions Of Trump’s Presidency, From #MAGA To Impeachment.”

When faced with highly uncertain conditions, military units and major corporations sometimes use an exercise called scenario planning. The idea is to consider a broad range of possibilities for how the future might unfold to help guide long-term planning and preparation. The goal is not necessarily to assess the relative likelihood of each scenario so much as to keep an open mind so you’re not so surprised when events don’t develop quite as you’d expected.

Public relations professionals play a key role in media-related and other forms of storytelling. Their work relates to the concept of role play as an element of storytelling. The role is distinct from that of the media reporter, op-ed opinion writer, and editorial writer/commentator.

With regard to the unique role of public relations, A Feb. 9, 2017 Columbia Journalism Review (@CJR on Twitter) article is entitled: “PR flacks may be the media’s secret weapon against Trump.”

A Feb. 17, 2017 Columbia Journalism Review article is entitled: “What does Trump have in common with Hugo Chavez? A media strategy.”

A Feb. 25, 2017 boingboing.com article is entitled: “Three kinds of propaganda, and what to do about them.”

We can define the elements of storytelling however we like.

In the diagram below, the Pond5 list is on the vertical axis; the list that I have devised is on the horizontal axis. As a heuristic exercise, I have indicated the primary points of overlap between the two lists. 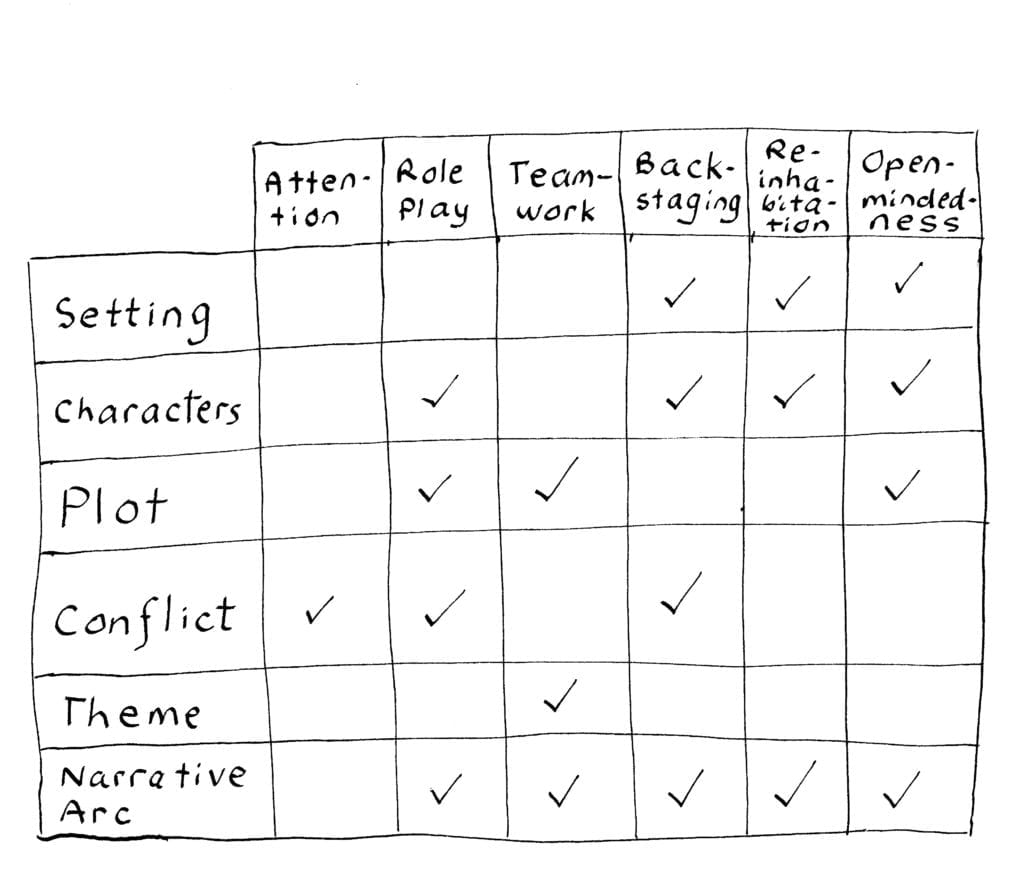 Grid denoting overlap of two lists of Elements of Storytelling

A March 29, 2017 Pew Research Center article is entitled: The Future of Free Speech, Trolls, Anonymity and Fake News Online: Many experts fear uncivil and manipulative behaviors on the internet will persist – and may get worse. This will lead to a splintering of social media into AI-patrolled and regulated ‘safe spaces’ separated from free-for-all zones. Some worry this will hurt the open exchange of ideas and compromise privacy.”

The Shapes of Stories

A Feb. 18, 2014 Design, Literature, Writing article is entitled: “Kurt Vonnegut Diagrams the Shape of All Stories in a Master’s Thesis Rejected by U. Chicago:

Adding up these windows over the course of a whole book produced graphs of characters’ fortunes — the highs and lows — throughout a given novel, and generated a broad visualization of the arc the story takes. According to the researchers, theses are the six story arcs that appear time and time again in Western literature:

Changes in memories (and persons) over time

A Feb. 17, 2017 Quartz article is entitled: “You’re a completely different person at 14 and 77, the longest-running personality study ever has found.’

(That is: Our memories are malleable – they change over time – and our personalities, however we may conceptualize what personality is, appears to change to a phenomenal degree over time as well.)

A March 11, 2017 Toronto Star article is entitled: “Museums as newsrooms, university profs as journalists: A look at how museums could be a source of trusted civic information, as well as the roles of universities and ordinary people as newsrooms shrink.”

Topics of related interest are discussed at a post entitled:

Empathy is great provided that we use it wisely

A June 19, 2017 WBUR article is entitled: “Tackling The Challenge Of Museum Design In The 21st Century.”