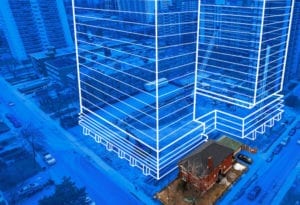 A Feb. 17, 2017 Toronto Star article (a three-part series) is entitled: “Contested Development: Many question whether the Ontario Municipal Board should be allowed to continue wielding its unelected power over a city crunched for resources.”

“But the developer, Pemberton Group, appealed to the Ontario Municipal Board, the most powerful body of its kind in North America, which can overrule the city on most land-use and planning disputes.”

“City staff have raised serious concerns about most of the pending applications — that they represent substantial overdevelopment, are poorly designed and that there is a lack of available community services to support new residents.”

“But with nearly 10,000 residential units in the pipeline in the Yonge-Eglinton area alone — more than is proposed in the entire city of Boston — there are growing concerns ballooning neighbourhoods like this one, and parts of downtown and North York, are buckling under that growth.

“Planners, local councillors and those living in these quickly changing communities say the city is at a tipping point, with schools and child care already over capacity, a lack of community and public space, daily traffic jams, crowded subway platforms and concerns hard infrastructure like sewers can’t keep pace without new investment.”

Part 2 of the Feb. 17, 2017 Toronto Star series is entitled: Planning Power and Politics

“With evidence the board is frequently siding with developers, council and community critics have long viewed the board as undemocratic and unaccountable to the residents whose communities it plans. As the most powerful board of its kind in North America, they say it is in need of overhaul — some say abolishment — to return actual planning to elected councils and local municipal staff.”

Part 3 is entitled: Onward and Upward

“’If at the end of the day we can’t uphold our official plan, well then it’s not worth the paper that it’s written on and you might as well just upload the whole Planning Act and all the planning decisions to the province,’ said Aurora Councillor Tom Mrakas, who led a summit on reforms with 13 other GTA municipalities.”

“Richard Joy, who was previously the senior policy adviser to the minister of municipal affairs and worked on the 2006 reforms to the Planning Act, said much of what they hoped to achieve wasn’t accomplished.”