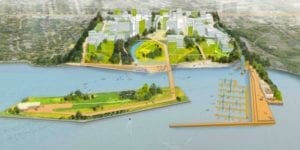 The image is from the Mississauga.com article highlighted at the post you are now reading. Caption: Redevelopment of Mississauga’s waterfront is beginning to take shape.

On Monday [May 1, 2017], the West Village Partners (WVP), alongside Mayor Bonnie Crombie, ward councillor Jim Tovey and city manager Janice Baker, will unveil plans for the redevelopment of the former Imperial Oil lands, 70 Mississauga Rd. S., in Port Credit. Stretching from Lakeshore Rd. W. to the lakefront, and Pine Ave. to Mississauga Rd., the 73-acre site will be transformed into a pedestrian-friendly, vibrant public space.

Coun. Jim Tovey has assured residents the redevelopment will be done at a human-scale, meaning the neighbourhood will not become a concrete jungle with towering high-rises obstructing the view of the lake.

Only six buildings will be 15 storeys or higher, with one reaching as high as 26-storeys. It is anticipated that 5,000 people will live within the new development and 1,000 retail and service jobs will be generated.

Environmental remediation is required on the former industrial site and will be paid for by WVP. The property began as brick manufacturing plant in the 1800s and continued until 1927. In 1932, it became an oil refinery and was used for petrochemical processing, with Texaco running it from 1959-85 before Imperial Oil bought it five years later.

Groundwater sampling taken around the perimeter shows all contamination is contained on the site. Remediation and redevelopment will take place simultaneously to speed up the process.

Monday’s announcement will take place at The Waterside Inn at 11:00 a.m.

The WVP expects to hold a community meeting mid-May and have an application prepared by June to present to the city’s planning and development committee.