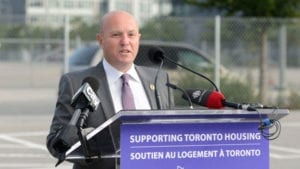 The photo is from the CBC article highlighted at the post you are now reading. The caption reads: Housing Minister Peter Milczyn defended provincial measures to cap rent in the province, arguing that they are making the market more fair for Ontario residents. (Twitter)

Ontario’s housing minister defended government measures to cap rent in the province even though a new report says at least 1,000 planned rental units have been cancelled or converted to condos since those rules were implemented in April.

Peter Milczyn says he is keeping a close eye on the housing market now that the provincial government has implemented its Fair Housing Plan. Under the plan, the province extended rent control to all units in Ontario, including those built after 1991.