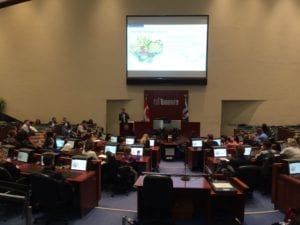 The turnout at the Nov. 30, 2017 Laneway Housing community meeting / consultation was very impressive; the photo shows just a small part of the audience in attendance. Jaan Pill photo

Although I do not live in a neighbourhood that has a lot of lanes, I am very keen to learn about Laneway Houses, Coach Houses, and Small Houses of all kinds.

I attended the Nov. 30, 2017 Consultation on Laneway Housing, referred to in the above-noted link and was very impressed with everything that I saw and heard. This appears to me to be a great consultation project. The views of residents – I get a clear sense of this from the meeting – will be heard; their views will be closely taken into consideration, I believe, based on what I saw at the Nov. 30, 2017 meeting.

As well, the slides and presentations and I imagine the gist of the Q & A part of the meeting will be featured at a website, devoted to the Consultation on Laneway Housing. The website will, as I understand, be up soon.

In the meantime, if you did not attend the meeting but would like to provide input, regarding your views about Laneway Housing, you can fill out the following comments sheet and send it to the postal address or email address included on the document:

I’m looking forward to visiting the City of Toronto “Changing Lames” website (or whatever it may be called).

I’m also keen about Laneway Houses because the concept is creative and imaginative. It’s one way to add density to a neighbourhood without changing its character. In order for such a form of housing to work well, several issues must be effectively addressed. Fortunately, many cities in Canada and elsewhere have already begun to explore the options.

My sense from attending this evenings “Changing Lanes” community meeting is that the politicians, city staff, and residents who are involved with this initiative are off to a great start and will do an awesome job in finding solutions to the issues that are at play!

As residents, neighbourhoods, and societies, we become what we imagine ourselves... MPP Peter Milczyn Dec. 1, 2017 e-News Update
Scroll to top