The following post is the first in a series of seven posts dealing with stops along the route of the May 5, 2018 Jane’s Walk that MPP Peter Milczyn will be leading.

As well, I will refer to “The Telegram” sign that is still on display at the front of a variety store just west of the starting point for our walk. After the Telegram folded, around the 1970s as I recall (I will check), some former staff from the latter paper forms a new newspaper, namely the Toronto Sun.

In days gone by, people liked to name all kind of places after Long Branch

Long Branch has long been popular, along the Lake Ontario waterfront, as a name for different kinds of places.

In Lakeview, in Mississauga to the west of Long Branch, for example, several places have been named after Long Branch. 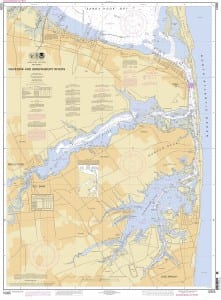 As well, the Long Branch Racetrack also comes to mind. The racetrack, which was a well-known establishment years ago, was actually located north of Long Branch; it too was never located within the borders of the latter community.

Nearby neighbourhoods, we can speculate, appeared to enjoy naming things after Long Branch. Brevity may have been a factor – “Long” and “Branch” is each a single-syllable word. The two words roll off the tongue easily.

The name may also have given rise to visual imagery that appeals to people: You can picture a river; it has two branches; one is the short branch, the other is the long branch, of the river.

Long Branch in Toronto may have been named (the evidence is not definitive, on this matter) after Long Branch, a beachside city in New Jersey; the latter Long Branch is named after the “long branch” of an actual river, the Shrewsbury River, a short stream in central New Jersey. A map of the river, on the page you are reading, is from the geographic.org website.

The neighbourhood of Long Branch, as we know it now, has the following boundaries:

The western boundary, along the Lake Ontario shoreline,  extends a short ways to the west of Applewood Creek. [I have referred to an online Gosur.com Map of Ontario to check where the Mississauga-Toronto border is located, on the Lake Ontario shoreline.] Years ago, there was a western branch, to Etobicoke Creek, and it ran westward roughly to where the outlet for Applewood Creek is now located.

The railway tracks to the north mark off the northern boundary.

Lake Ontario forms the southern boundary of Long Branch. Thanks to infill work in the postwar years, the shoreline has actually been extended a ways south, here and there, beyond where it had been in earlier years. 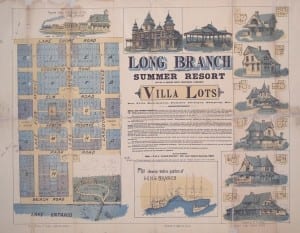 Poster of Long Branch Park development. The poster is entitled: “Long Branch Summer Resort lot no. 9, broken front concession, Etobicoke villa lots for villa residence, summer cottages, camping, etc.” Details on how to order a copy of the poster are available at a Toronto Public Library webpage entitled: “Collection Reproduction and Digitization on Demand.” The current names of streets in the area can be accessed at an archival document: Long Branch Street names – May 13, 1935. Click on image to enlarge it; click again to enlarge it further.

Long Branch Park is currently the name of a park directly south of Lake Promenade, between Long Branch Ave. and a point a short ways to the west of Thirty First St. In years past, however, starting in the late 1880s, a summer resort named Long Branch Park covered a much larger amount of ground. 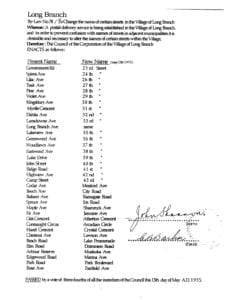 As our walk proceeds, we will highlight some of the changes that Long Branch Park has undergone. At this point, a key thing to note is the current Zoning profile of the area, where the original Long Branch Park was located. 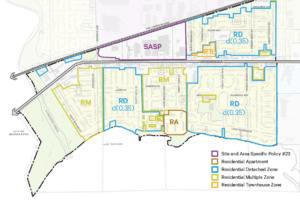 A previous post features a transcript of remarks by Ward 6 Councillor Mark Grimes, prior to a vote at Etobicoke York Community Council regarding the Long Branch Character Guidelines:

In those remarks, Grimes noted that, back in 2003 or 2004, Lake Shore Blvd. West had a stagnant quality about it. He also referred to subsequent the Avenues Study, which, as he said, “allows a six-storey, very European storefront.”

“We’re starting to see the fruits of that,” Grimes added, in his remarks on Nov. 14, 2018. Arvin Meritor across the street, where the Beer Store was, that was always contemplated – we took that out of the plan. We didn’t want to force that employment out but we saw that evolving, once Arvin Meritor left and, you know, Castrol’s there, we’re protecting them, but we saw that would eventually evolve.”

In subsequent years, Grimes continued, in his remarks, “you see the new buildings coming in, the new retail; you heard somebody [that is, a deputant at the Nov. 14, 2018 Community Council meeting] talking about the new restaurants and shops, which people are screaming for, so we’re starting to see the fruits of Lake Shore.”