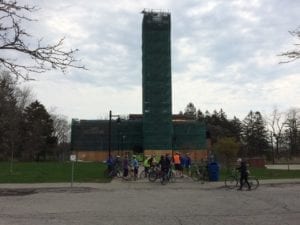 I much enjoyed a recent heritage ride entitled “Long Branch: A Jane’s Walk Bike Tour,” led by David Juliusson with the support, and backing, of the Etobicoke South Cycling Committee and the Long Branch Neighbourhood Association. 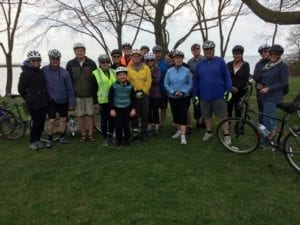 Over 20 enthusiastic cyclists turned out for the ride. Jaan Pill photo

David’s overview of the ride reads:

NOTE: This is a cycling tour. In 2018, City Council adopted special guidelines to preserve the unique character of Long Branch. We will look at some of the historic sites and events. Long Branch has a rich heritage, ranging from Colonel Sam Smith building his home in 1797 to Hurricane Hazel to the first Heritage Tree being declared in April 2018. We will stop at those sites. In addition, the ride will stop at the site of the Long Branch Hotel, pass historic cottages, and go to the border of Mississauga. We will pass murals, visit a cenotaph and enjoy the beauty that is Long Branch. The ride will end in the same place as it began. 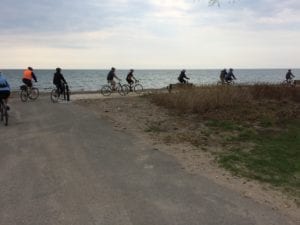 I much enjoyed this ride, for many reasons.

First, I was able to learn a number of new, and clarifying, key details related to the sites where we stopped, that have much increased my understanding of local history.

For example, among the ride participants was Bob Cutmore of Mississauga. I got to know Bob around 2013, at a time when he was a key organizer of Doors Open events at the Small Arms Building in Lakeview. That was around the time that I first met Jim Tovey – it was at the first Small Arms Doors Open event that I attended. 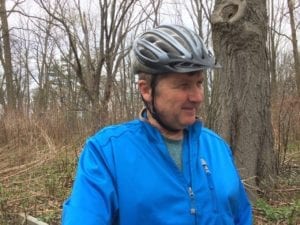 At a stop near Applewood Creek in Marie Curtis Park on May 6, 2018, Bob Cutmore explained how several wartime facilities – including the Long Branch Aerodrome, Long Branch Rifle Ranges, and Long Branch munitions plant –  in what is now known as Mississauga came to be named after Long Branch, even though they were outside the boundaries of what used to be called the Village of Long Branch.

I will wait until I transcribe my recording of his remarks, regarding this point, as I like to get such an explanation just right, by sharing a direct quote, in this case from Bob Cutmore.

The ride also gave me an opportunity to learn about some questions, that I can follow up on, by way of doing additional research. For example, one question had to do with details related to the fence that surrounded the original Long Branch Park, which was the focus of a Jane’s Walk in Long Branch, led by MPP Peter Milczyn, the previous day, May 5, 2018. I will follow up on that question. 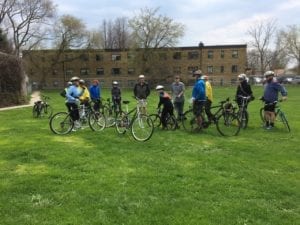 The ride included a stop at the site where Colonel Samuel Smith built his log cabin in the forest in 1797. Jaan Pill photo

I also enjoyed again visiting the Heritage Tree at the corner of Park Blvd. and Long Branch Ave. 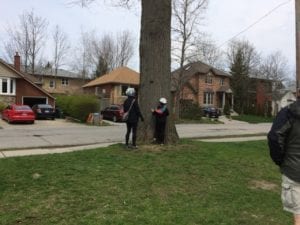 The ride also included a visit to the newly designated Heritage Tree, located within viewing distance of the Long Branch Hotel, which burned down in 1958. Jaan Pill photo

A feature of life in Long Branch, as elsewhere in Toronto, is that some of the trees are much older than any of the people living in the community.

Such is the case with the 80-feet-tall, 200-year-old red oak tree, which has been recently designated as a Heritage Tree.

We owe thanks to the Long Branch Neighbourhood Association for taking the initiative, and doing the research, that led to official designation, of this Heritage Tree.

And it would have been about three years old in 1815, when Napoleon was defeated at the Battle of Waterloo, and the Napoleonic wars came to and end.

This tree is the first officially designated Heritage Tree in Long Branch. Students from James S. Bell Junior Middle Sports and Wellness Academy were on hand on April 30, 2018, at the official unveiling of the tree.

At the ceremony, it was noted that a municipal bylaw protects Heritage Trees in Toronto, the only bylaw of its kind in Ontario. 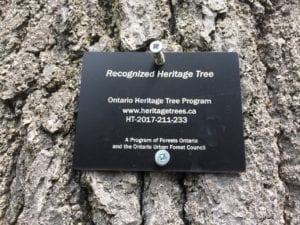 The tree would have been around 66 years old, in 1884 when the Long Branch Park exclusive summer resort was founded.

As was noted at the unveiling ceremony on April 30, 2018, the tree stood in full view of the Long Branch Hotel, along with other key features of Long Branch Park, including a carousal, a ballpark, dance pavilions, and a water slide on the lakefront.

It is the tree that has remained standing, long after other features of the park have disappeared.

May 8, 2018 e-News Update from Etobicoke Lakeshore MPP Peter Milczyn Second Units at the City of Toronto: Message from David Godley of Long Bran...
Scroll to top