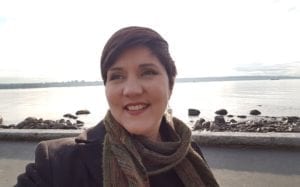 The tagline for Park People says: Park People supports and mobilizes people to help them activate the power of parks to improve quality of life in cities across Canada.

The opening paragraphs for the above-mentioned article read:

Rena Soutar is one of the keynote speakers at Park People’s upcoming Heart of the City Conference taking place in Montreal, June 12-14, 2019. Rena Soutar is the first Reconciliation Planner at Vancouver Board of Parks and Recreation. Register or apply to attend the Conference.

For 3,000 years, Indigenous peoples lived on a densely forested peninsula overlooking the Salish Sea in what is now called Stanley Park. It was home to the Tsleil-Waututh, Squamish and Musqueam peoples, and there was a village onsite called Xwayxway, where potlatches were held as late as 1875. Today, Vancouver’s largest iconic park holds little trace of its Indigenous ancestry.

Following the land’s official designation as Stanley Park in 1886, most Indigenous inhabitants were removed without remuneration. This displacement took place in parks across the city. According to the Vancouver Park Board:

“One of the core acts of colonialism is the removal of entire communities from their ancestral homes. This has been undertaken by the Park Board since its inception—beginning with the declaration of jurisdiction over ‘Stanley Park’, as well as beach areas around the City.”

Conference on April 30, 2019 at Art Gallery of Ontario, called Digital Leap,... The Town of Niagara-on-the-Lake and developers Solmar and Two Sisters Resorts...
Scroll to top