From time to time I like to post excerpts from such publications. The most recent edition of the ACO newsletter features the news items posted below.

Some background regarding the Port Dalhousie heritage district, discussed below, can be found here.  An article about a condominium that’s going up can be found at this website. The Toronto Star has published a real estate article about the project.

A Heritage Canada Foundation overview of the project can be found here. According to the overview, an OMB decision regarding the Port Dalhousie development project “calls into question the protection afforded the more than 90 heritage districts already designated in Ontario.”

Master of Arts in Planning thesis

Elahi’s thesis report offers a comprehensive and valuable overview of literature related to heritage issues. Among the resources it cites is A geography of heritage: power, culture, and economy (2000).

In the abstract of the thesis, Fazeel Elahi comments:

“This study recommends that heritage planning should be more proactive in municipal land use planning, and heritage guidelines for conservation areas should be part of broader heritage management programs where power sharing, participation, and decision making reflect social equity. The findings and recommendations from this study are intended to assist communities, managers and planners in future efforts to conserve built heritage.”

An article in The New York Times, concerning a proposed project in Venice, is of interest with regard to the ongoing discussion concerning the redevelopment of heritage sites.

The first item below, from the Architectural Conservancy of Ontario newsletter, regarding the condominium development in Port Dalhousie, reminds me that regarding any report, one can speak of a continuum. At one end of the continuum is a report that’s an expression of opinion. At the opposite end of the continuum is a report based on facts, without explicit expression of opinions about them.

Reports characterized as factual include implicit opinions or judgements, related to how facts are selected, defined, and presented.

A report from the Architectural Conservatory of Ontario — a valuable item giving rise to my interest in this story — is at a midpoint in the above-noted continuum:

Dalhousie update: Danger due to demolition!

You may remember the drawn-out battle of Port Dalhousie: a developer applied to build a high-rise condo tower in the middle of the long-established heritage district in Port Dalhousie. The local residents objected strongly and formed PROUD to fight the battle against the tower’s intrusion into the heritage district and the beautiful lakefront area. The OMB ruled against the group, ruling that that the tower project could go ahead for the good of economic revitalization of the area, overruling the HCD [Heritage Conservation District] guidelines. The OMB decision set out conditions for the development including protection of the identified heritage elements during the construction and the inclusion of a theatre and public space.

Three and a half years later, the wrecking ball moved last week in to demolish several of the formerly protected heritage buildings as you can see in the photos I took on Sat. Nov. 17. The developer has broken his promises, and the OMB ruling has been ignored. The developer has bought up even more properties in the area and boarded them up, leaving them to demolition by neglect and the remaining businesses to economic decline.

A local resident filed a request for audits of expenses of six city and regional council candidates on the grounds that they had violated the Elections Act by accepting over contributions from companies related to the Port Tower developers. Their lawyers happened to be the same lawyers who acted on behalf of the developers who had overcontributed. The local resident was labelled a “malicious busybody” and ordered to pay the court expenses of the councillors (who had admitted the overpayment to their campaigns). 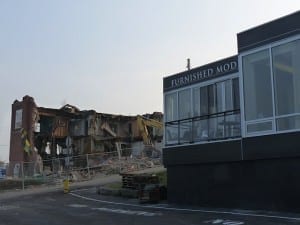 From the newsletter: 'And where is St. Catharines City Council during this flagrant violation of the OMB ruling?'

St. Catharines City Council has now approved changes (sorry – “refinements” as they call them) to the heritage conservation strategy for the project. These approvals have now been challenged by lawyers for the Port Dalhousie Conservancy (formerly PROUD), and for the Port Dalhousie Heritage District Advisory Committee which advised against accepting the proposed changes.

Developers have deep pockets; they can afford full-time paid lobbyists and lawyers.

Volunteers have no pockets, only passion and deep caring for the community they love.

The Port Dalhousie Conservancy has fought a valiant battle to save “The Port” and they continue to fight injustice and to hold both their municipal government and private interests to account for their decisions.

ACO dinner a sellout and a success!

The ACO Awards night was a sellout and a success; Eve Lewis of Woodcliffe, our lead sponsor, was a trouper, handing out the many awards. (See all the winners here in our last newsletter.) Thanks to all who worked so hard to make this happen on the Awards Committee.

NextGen’s place in adaptive reuse, or touring my grocery store

As a new Canadian, I have never known Maple Leaf Gardens as anything other than the Loblaws where I spend far too much time and money. I am ignorant of hockey, but I’m told the Toronto Maple Leafs left the arena in 1999 after sixty-seven years. The Loblaws flagship store opened there a year ago this month. Still, even among the prismatic vegetables and the wall of cheese, the building affirms its past life, which is the ultimate source of appeal for a heritage enthusiast like me.

ERA Architects were part of the team responsible for making my grocery shopping an awfully pleasant experience and, more importantly, for restoring and protecting the historic fabric of a building that has long played a role in Torontonian life. (I now work for them, but I am really not biased.) Their work on the project recently won the ACO’s Paul Oberman Award for Adaptive Reuse. On November 3, Principal Scott Weir gave a tour for ACO’s NextGen group to discuss the process of restoring and redeveloping Maple Leaf Gardens. He led us around the building’s exterior, into the Loblaws, and through Ryerson University’s hockey rink and sports complex on the upper floors. Accompanied by the narrative of its transformation, my walk around this familiar space took on new meaning.

When I first moved to my neighbourhood and described the location to friends, the standard reaction was envy because, “That’s so close to that beautiful Loblaws!” Already, it seems, Maple Leaf Gardens’ identity has begun to shift in the public mind, but its landmark presence continues to define the surrounding area. I believe that my peer group, the “next generation,” has a responsibility to guard and guide this shift. As young witnesses to adaptive reuse, we are charged with integrating the past and the future. We are the bridge between the old identity and the new, between a shrine to hockey and a temple of groceries. By heeding the history of the places we are inheriting, we are poised to both continue their preservation and infuse them with new vitality.

There’s an app for that: Toronto in Time launched

Toronto in Time is a free mobile app for iOS and Android that highlights the history of Toronto through “then and now” photos, slideshows, trails, and historical stories for more than 150 sites!

Through Toronto in Time, discover the story of the club that hosted the Rolling Stones, U2, and Marilyn Monroe; explore where soldiers of the War of 1812 lie buried; stand on the site of a 17th century First Nations village, and much more. Meet a cast of characters that includes inventors, musicians, entrepreneurs, bank robbers, artists, visionaries and dreamers who paint the rich portrait of Toronto’s history.

Toronto in Time is second in the “Cities in Time” series, which was launched with Vancouver in Time in the fall of 2011, available for free in the App Store.

Cities in Time was conceived by James H. Marsh, Editor in Chief of The Canadian Encyclopedia. He sought to make history interesting, accessible and relevant to the modern person, and using mobile technology seemed like a natural choice. The most appealing thing about history, said Mr. Marsh, is that it’s all around us. There is history in street corners, and in parks, and old storefronts. With this in mind, all the historic stories on the app are tied to a location, and the photo features show the evolution of a site, and by extension, the evolution of the city. Said Mr. Marsh, Hopefully, people will understand the deep connection between place and history and see the journey that Toronto has taken over time.

To celebrate all the ACO has accomplished over the past 80 years we will be putting together a book that highlights 80 buildings we’ve helped to save.

The buildings can be ones that the ACO owns, ones we have partnered to save, helped to fundraise for, provided advocacy or grants for, or been involved with in any way. We want to tell the diverse ACO story from all across Ontario.

We will use the book and the sites to highlight Architectural Conservancy of Ontario success stories over the 2013 year.

A nomination form, including instructions, can be found on the ACO website. The deadline for submission is January 30, 2013. Completed forms, along with all requested documentation and photographs, should be sent by email to Kayla Jonas.

Our fall issue of ACORN was a great success and I thank all our writers and contributors for their stories of local heritage landscapes. I’d also like to thank the NextGen members who wrote some articles for this issue: Tatum Taylor, Lindsay Benjamin, Vanessa Hicks, Amy Calder and Hillary Vaillancourt. Our Editor Leanne Piper and co-editors Emma Jenkin and Kayla Jonas were very patient in collecting the articles over the summer months.

The theme of the next issue of ACORN for publication in the early spring will be ACO?s anniversary celebration by telling the story of ACO?s history, changes over time and its key figures.

We encourage you to explore names like Eric Arthur, Peter Stokes, Herb Stovel, early branches (the first branch was Hamilton-Niagara as I understand. Tell us how your branch got started, key figures in your area who helped out, good stories about the branch. If you have long-time members, ask them to tell their stories.

If you have a story to tell, and need a writer, let us know. If you are a writer and would like a story, let us know.

Articles should be 500-1000 words in length, sent as a Word document. Please also include 2-3 high quality photographs. Add photo captions and credits to the bottom of the article, and send the photographs as attachments, do not embed them in the word document. Also include a short biography (2-3 sentences) about the author.

Inquiries and articles can be submitted to Susan Ratcliffe.

We have a new Strategic Plan!

The Strategic Planning and Fundraising Committee of the ACO Provincial Office retained the firm of TCI Management Consultants to help the organization through the development of a strategic plan. After a process of consultation with the branches, it came up with a set of ideas that we will be starting to implement immediately. You can read it all at our website.

Etobicoke Creek Trail extension and Class EA study for improvements to QEW between... Own Your City is the Official Blog of the Chief Planner of the City of Toro...
Scroll to top