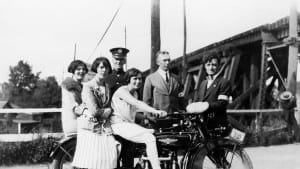 Update: In response to the post you are now reading, we’ve received additional information, from Jim Carr and Catherine O’Marra, regarding the motorcycle featured in the photograph.

A recent project has involved tracking down information related to the photograph on this page.

The caption refers to the radial bridge over Highway 2 and Etobicoke Creek approximately 1927. An earlier version of the caption referred to a Highway 1 but I’ve since determined, with help from Robert Lansdale, that the reference to Highway 1 was a typo.

We seek additional details related to the photo

Can you provide any other information about the identities of the people in the photo, and their roles? Please contact me if you have additional information related to any aspect of the photo.

As with many photos, of particular interest is evidence related to the back story that goes with the photo.

I’ve written elsewhere about the Queen Elizabeth Way and the Middle Road Bridge.

Some details about the history of Ontario highways 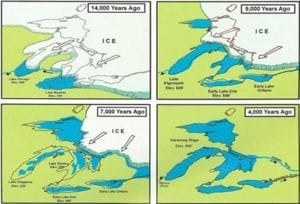 The following information is from The King’s Highway website.

Q. Did Ontario ever have a Highway 1?

A. Ontario did not ever legally designate a Highway 1. The highway numbering began at Highway 2.

Q. Why does Ontario not have a Highway 1?

A. The exact reason is not clear, but reportedly, Highway 1 was omitted from the 1925 route numbering system to eliminate conflicts between many of Ontario’s larger towns, who all demanded to be on a highway bearing the route number “1”. Given the geographic shape of Ontario, it would have been impossible for the Department of Highways to number a route that would pass through every major town in Ontario. Rather than risk any accusations of favouritism, the Department decided that they would simply not designate a Highway 1, and thus began the route numbering at 2.

Through talking with Jane Fairburn, I’ve been getting a good sense of the work that’s involved in the production of her upcoming book, Along the shore. The book is concerned with the communities in the Toronto area that face Lake Ontario.

Such a book has some straightforward requirements, in my perception as a reader. It needs to:

Jane Fairburn excels at these tasks. She’s a role model for any person seeking to put together a book related to local history.

She has all the key ingredients in place:

I look forward with interest to the launch of this book.

Mark Schacter is the author of a recent book, The Sweet Seas (2013), concerned with a related topic, namely the Great Lakes. A blurb at the Toronto Public Library website notes:

“When the first European explorers saw The Great Lakes they called them les mers douces – the sweet seas. They had never before encountered anything comparable. For the First Nations the Great Lakes have long been places of wonder and mystical power. And today the Lakes still have an ability to fascinate. Acclaimed photographer Mark Shachter travels the Great Lakes system to produce a personal portrait of the lakes and their surrounding towns, cities, ports, industrial zones and landscapes.”