I recently spoke with two former Long Branch residents, Jim Bray and his daughter Sandy Bray, who have filled me in on details, that I was not aware of, related to the barns at the Colonel Samuel Smith homestead site.

Jim Bray has also shared some comments at a couple of recent blog posts related to the history of Long Branch (Toronto not New Jersey).

He mentioned that the Smith house was demolished to make way for the new school; it really wasn’t a matter of making space for the Dominion parking lot, in his recollection. As well, he mentioned that the critical variable in houses being moved out from the Etobicoke Creek flood plain was Hurricane Hazel. It was not, he added, a matter related to other factors.

I find it delightful that, through the Internet, phone calls, and face to face meetings, we can together share details about this very small area of Toronto, namely the area close to the mouth of Etobicoke Creek and extending as far as the colonel’s homestead site, which during part of its history served as a working farm.

I find it delightful as well that I’ve had the opportunity to learn many things from many former residents, who lived in Long Branch decades ago, in some cases as children.

In many cases, I’ve heard from people from across Canada who still remember enjoyable and happy days spent in the community. 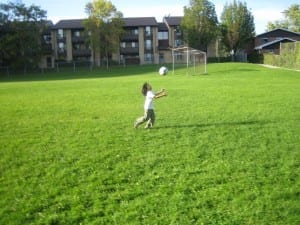 View looking north toward embankment (small hill in background) at north-east corner of Colonel Samuel Smith homestead site. The Smith house was located in an area to the south of, and close to, the baseball back stop. Jaan Pill photo

I mention it’s the Long Branch in Toronto not New Jersey because I used to get a lot of inquiries about Long Branch, New Jersey.

I look forward to getting more details from Jim Bray and Sandy Bray, and from other sources, in order to corroborate the information that we’ve shared to date.

I mentioned to Sandy Bray that I’ve come across a 1905 survey map (see below) of the Colonel Smith homestead site, and would post a detail from it.

A detail from survey, which may be helpful in the study of the November 1949 aerial photo. The 1949 photo is also posted at the end of this post. Click on the photo to enlarge it. Click again to enlarge it further. Use the ‘Back’ button on your browser to return to the page you are now reading.

I’m also aware (Henn Hurvits, personal communication, Sept. 30, 2013) that a barn was located in the late 1940s at a location to the north of the road leading to the Smith house. The barn, located not far from the house, would have been built after 1905. I look forward to getting more precise and detailed information about this structure, and about the Smith house itself.

As well, the area corresponding roughly to the area bounded by a dotted line in the survey, just north of the Smith house, served as a summer kitchen in the late 1940s (Henn Kurvits, personal communication, Sept. 30, 2013).

Henn Kurvits has also mentioned that a contractor who was associated with the site in the late 1940s or early 1950s used to haul equipment around using a Bren Gun carrier. Such carriers had been used in the Second World War to cart around Bren Guns manufactured at the John Inglis small arms plant in Toronto.

My own knowledge of the buildings to the north of the Smith house is limited to the archaeological evidence discussed in a presentation I made some years ago at the Long Branch Library.

As is noted in the speaking notes (see link in previous sentence) for the above-noted presentation, which is also available as an online video, an area of particular interest from an archaeological perspective is the embankment – the small hill close to where the townhouses are now located. The preliminary archaeological dig in 1984 indicated that two outbuildings, right on top of each other, are located on the hillside. The video includes a photo of the Smith house as well as photos of artifacts unearthed in a 1984 preliminary archaeological dig at the site. 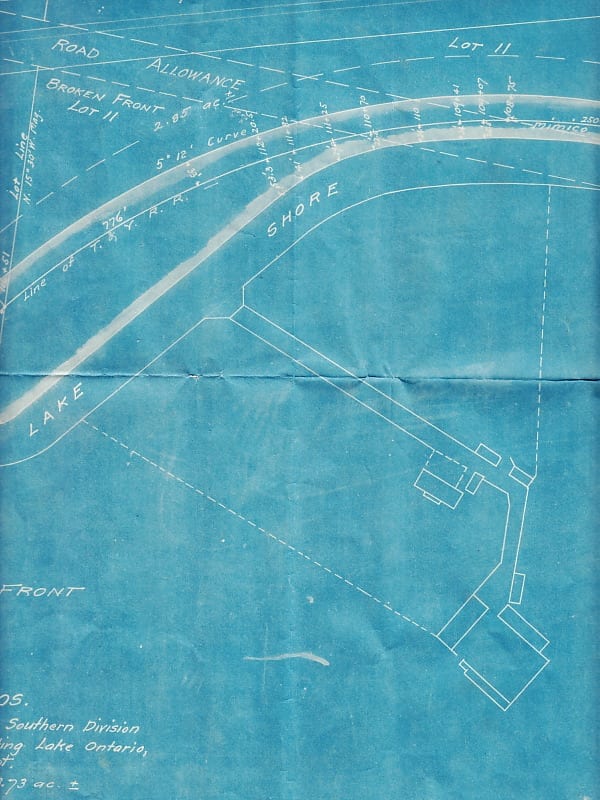