By way of an introduction:

1) Truthiness refers to sense making in the absence of evidence.

2) What does the work of stage magicians tell us about how the mind works? The link to a May 3, 2008 Boston Globe article about this topic can be accessed at the previous sentence.

The article notes that our model of how perception occurs has changed in the past decade; according to the new model, “visual cognition is understood not as a camera but something more like a flashlight beam sweeping a twilit landscape. At any particular instant, we can only see detail and color in the small patch we are concentrating on. The rest we fill in through a combination of memory, prediction and a crude peripheral sight. We don’t take in our surroundings so much as actively and constantly construct them.”

Does Fairtrade certification benefit poor farmers? In Ethiopia and Uganda, the answer is No: study 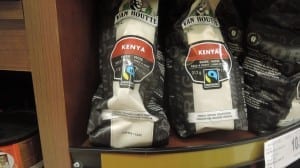 So far, through my reading and Twitter conversations, I’ve concluded that fair trade coffee as a brand is simple and evocative: “Pay a premium for your coffee thereby helping poor farmers get a fair price for their product.” Or: “Change your coffee change your world.”

I speak as a person who much enjoys the taste of coffee and the ambience at my local, independent coffee shop, Fair Grounds Organic Beanery & Café. I also enjoy visiting Birds and Beans Café by the Lake and the Second Cup at Cloverdale Mall.

Fair trade coffee: the back story

The back story related to fair trade coffee is, in turn, complicated and evocative.

Fair trade coffee, as a brand, may have an element of truthiness as a key ingredient. By way of genres, it appears to demonstrate characteristics of the borderland between fiction and non-fiction.

Truthiness is a pervasive feature of our lives, a key feature of history and prehistory. It may be a characteristic of human perception that’s wired into our brains – figuratively speaking – as a feature of evolutionary biology.

Truthiness is a feature of mental functioning that stage magicians must, of necessity – in order to excel at their craft – learn to work with closely.

It takes more work, in many cases, to access any back story than it takes to access the brand, the blurb, or the brief news report.

Evidence-based practice, and evidence-based ways of making sense of the world, are the antithesis – that is, the direct opposite – of truthiness.

In the past I wasn’t much concerned with evidence as a key variable in sense making, but about thirty years ago I was able to address a challenging situation, with the help of other people. The people who helped me were data-oriented. Being able to arrive at a satisfactory outcome, with regard to a problem I encountered, had a strong impact on my life.

Until that point, the concept of attending closely to evidence hadn’t occurred to me.

Whenever I have reason to look closely at any back story, my first concern is:

“What is the evidence? Where is it published? How do I know the evidence is valid and reliable? How was it gathered? What are the qualifications, affiliations, and competencies of the investigators? To what extent can generalizations be made on the basis of the evidence? What is the frame of reference within which the evidence has been gathered and presented? Has the research been corroborated?”

The underlying assumption in the latter study is that “we live in an age of ‘truthiness,’ a time when our understanding of truth may not be bound to empirical evidence – that is, to anything real, provable, or factual” (p. 34).

“Defined by the American Dialect Society,” the overview adds, “as ‘the quality of preferring concepts or facts one wishes to be true, rather than concepts or facts known to be true,’ the term has come to suggest our willingness to accept the plausible in place of the true.”

The above-noted overview notes that the American invasion of Iraq serves as an illustration of truthiness in the service of American foreign policy during the Bush administration. The related back story is outlined in a June 12, 2014 Atlantic article entitled: “Iraq’s Long Unraveling: As militants vow to seize Baghdad, the country is facing a crisis that has been building for years.”

An April 28, 2014 New Yorker article addressing the same theme is entitled: “What we left behind: An increasingly authoritarian leader, a return of sectarian violence, and a nation worried for its future.”

By way of continuing on the theme of truthiness, a June 18, 2014 Reuters article is entitled: “Least accurate online videos on blood pressure are most popular.”

According to the article: “We prefer thoughts that come easily: Faces that are symmetrical, colors that are clear, and sentences with parallelisms. In this light, there are two problems with hard news: It’s hard and it’s new. (Parallelism!)”

An Aug. 16, 2016 Vox article is entitled: “The media vs. Donald Trump: why the press feels so free to criticize the Republican nominee.”

The article notes: “Politicians are not fully truthful. Everyone knows that. But they make a basic effort at being, as Stephen Colbert put it, truthy. The statistics they cite are usually in the neighborhood of correct. The falsehoods they offer are crafted through the careful omission of fact rather than the inclusion of falsehood. They may say things journalists know are wrong — climate change denial is a constant among Republican officeholders — but they protect themselves by wrapping their arguments in well-constructed controversy or appealing to hand-selected experts.”

Fair Trade and a Global Commodity (2008)

I’ve begun my study of fair trade coffee – the brand and the back story – with a Toronto Public Library copy of Fair Trade and a Global Commodity (2008).

I’m not going to have time to read the book anytime soon. However, a valuable and informative online review, published by the American Sociological Association in 2010, of the book and several others can be accessed here.

The book review, which has much increased my understanding of the underlying issues and possible ways to improve the fair trade system, refers to a contradiction in fair trade coffee – namely that it operates simultaneously “in and against the market” (Barratt Brown 1993, p. 156). The article identifies the competing Rainforest Alliance as a “‘sustainable’ certification with lower social standards” (p. 294). It also describes several ongoing fair trade projects including the Community Agroecology Network (CAN). According to a footnote, “Coffee can also be ordered directly from the [Community Agroecology Network] coop in Costa Rica at this site. It may take a while to arrive, but it is very good.”

Among the questions the article asks is whether the long term goal of fair trade coffee “is simply to increase market share or to fundamentally transform international trade” (p. 294). Related concepts are also discussed, including organic production and shade production of coffee. As well, the article highlights a viewpoint that positions the current fair trade network as a neoliberal alternative to the earlier projects of the original fair trade movement.

In its conclusion, the article notes:

Efforts to turn neoliberalism into a useful analytic tool

A related topic that comes to mind – which I’ve addressed in a series of earlier posts – concerns efforts to turn the term “neoliberalism” into a useful analytic tool.

Also of interest is a June 30, 2010 Freakonomics article entitled: “Fair Trade and the Food Movement.” We can add that Absolute Value (2014) advances the view that consumers, in a trend that runs counter to truthiness, are increasingly less susceptible to brand-focused “framing or context manipulations.”

However, the book also acknowledges that fake online reviews – a form of scamming, a variation on the theme of truthiness – remain a source of potential concern. A June 5, 2014 Globe and Mail article about fading brand loyalty – related to the proliferation of social media – similarly addresses themes that concern the impact of context and framing in the shaping of perceptions.

Is there a reason to boycott fair trade coffee after reading recent research reports? For me, answer is: No

By way of a further update, a June 12, 2014 Atlantic article is entitled: “How neuroscience reinforces racist drug policy.” The article underlines the strong role that framing can play, even when we’re dealing with what on first glance appears to be objective information – that is, what is typically characterized as hard data, or as solid evidence acquired by rigorous scientific means.

The subhead for the article reads: “Brain scans do not speak for themselves. The seemingly objective science of neuroimaging can be used to justify a moral argument for or against legal marijuana – to show it as a legitimate medicine, or as a danger to your health.”

I’ve discussed the role that context plays, when neuroscience research  is reported, in an earlier post:

Brain Culture (2011): The metaphor of the brain as frontier

A June 18, 2016 Globe and Mail article is entitled: “Who needs the truth in this post-factual world?’

An Aug. 24, 2016 Poynter article is entitled: “The more partisan your online media diet, the less likely you are to believe fact-checkers.”

A March 2018 CBC article referring to a  March 18, 2018 CBC briadcast is entitled: The science of magic: What magic has taught us about how the brain works.”

An MCHS Sixties grad is interested in a mini-reunion – a casual get together... CORRA objects to proposal for community groups to register with Lobbyist Registrar...
Scroll to top