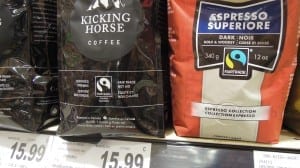 Fair trade coffee is of interest to me, as a brand and in terms of recent research associated with it.

I’ve previously posted an abstract of an article co-authored by Eileen Davenport. Another article she has co-authored is:

There is a growing academic literature exploring the fair trade movement but, to date, there has been little explicit discussion of accountability within the movement. This paper aims to cast the development of the fair trade movement within a shift from trust-based relationships to standards-based systems. The authors particularly aim to focus on the dominance of an external accountability approach being used for Fair Trade Labelling Organization International (FLO) certified products versus an internal accountability approach being adopted through organizational self-assessment of World Fair Trade Organization (WFTO) members.

While this is predominantly a conceptual paper, the authors draw on primary research with northern and southern fair trade organizations (FTOs). Five southern FTOs were interviewed along with three northern FTOs.

The paper illustrates the conflict that Power expressed about trust increasingly being placed in formalized “rituals” of auditing rather than in organizations. Standards-based certification has played a crucial role in mainstreaming fair trade food which reduces the trust relationship to a label and relies on market-based mechanisms of “ethical consumerism” to signal (dis)content with the operations of the certification system. By contrast, organizational self-assessment under development by WFTO, which has proven popular amongst southern FTOs, fitting their organisational culture(s) and contributing to organisational learning and democracy, creates greater accountability to internal stakeholders such as producers.

This paper draws direct comparisons between the FLO system of certification of products and the WFTO process of self-assessment of organizations. It demonstrates that the WFTO system builds on the movement’s tradition of democracy and trust. Producers, southern FTOs, and northern FTOs must demonstrate their democratic principles throughout the supply chain up to consumers. Conversely the FLO system governs the products themselves and largely leaves the participants, other than producer groups, free of demands for corporate social responsibility and organizational learning.