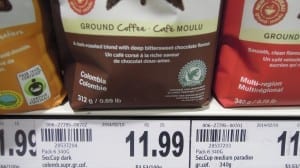 Among the academic lenses available for study of fair trade coffee is ethnographic research.

Ethnography is similar to the work of a reporter or documentary maker but within a prescribed academic framework.

The level of detail, however, and the amount of immersion into everyday life, appears greater than what a reporter would deal with. Ethnographic research can make for informative reading.

Jane Jacobs combined elements of ethnography and reporting in her work. She also worked to some extent within but largely outside of an academic framework.

I’m keen about following where the data leads me.

I’ve gone with the evidence and have pretty much stopped drinking red wine and eating dark chocolate. I’ve reduced my sugar consumption in line with the World Heath Organization’s proposed guidelines. With regard to coffee, I like  The Latte Factor.

From observing local coffee shops in south Etobicoke, I’m aware that much work goes into the running of a coffee business. That fact also comes across in the ethnographic study of fair trade coffee.

A recent ethnographic study is entitled: Buying into Fair Trade: Culture, Morality and Consumption (2013). A blurb – which, while of much interest, has the voice, at least to my ears, of a text written by a committee – for the book notes:

The book is an enjoyable read especially if you read it along with other studies.

The following passage employs a usage in which “fair trade” is hyphenated when linked with other words. I tend to avoid such hyphenations. Some word pairs work better without hyphenations. Word pairs such as “fair trade” demonstrate a kind of robustness, possibly because of the frequency of their appearance in print, that to my mind communicates a clear message, namely: “We can work fine without the hyphenation.”

The book’s index lists the following items for “Coffee.” Among the items is a reference to Uncommon Grounds: The History of Coffee and How It Transformed Our World (2010)

– Uncommon Grounds: The History of Coffee and How It Transformed Our World [2010]

Is there a reason to boycott fair trade coffee after reading recent research reports? For me, answer is: No