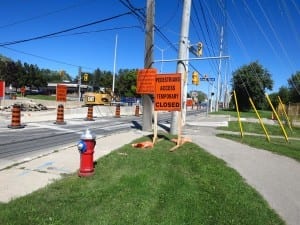 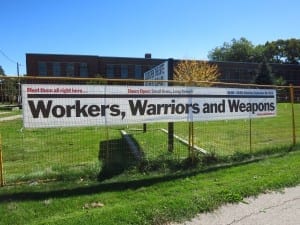 In recent years I’ve written several blog posts about the history dating back to the 1940s, that is connected with the Small Arms Building, located at 1352 Lakeshore Road East at the foot of Dixie Road.

Mural at Dixie Road and Lakeshore Road East as depicted in a photo from over a year ago. The photo shows the mural standing straight upright. With the passage of time the fence on which the mural is mounted has shown signs of wear and tear related to gusts of wind and forces of gravity. 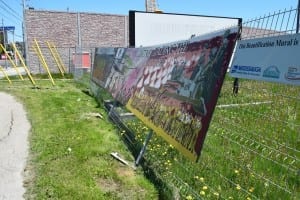 The mural at the Small Arms Building is currently leaning back against the white sign located just behind it. In the next while the mural will be moved to the building facade. Jaan Pill photo

Originally dedicated to the inspection of small arms manufactured at a nearby munitions plant during the Second World War, the building was saved from demolition in 2009. After renovations, it will serve as a community centre for arts, heritage, culture, and science.

At a December 14, 2014 post about the building, entitled Military history mural at Dixie Road and Lakeshore Road East contends with gusts of wind and forces of gravity, Diane LaPointe-Kay has today (May 23, 2015) written a comment, which I read with interest:

“Jaan, thanks for sharing all of the wonderful stories about the Small Arms Building. It was good to see you and so many others at the site today planting flowers and cleaning up the property.” 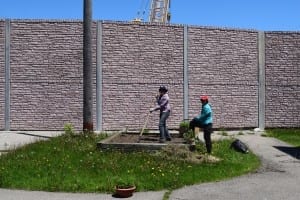 The Hanlan Water Project is located just east of the Small Arms Building behind the construction wall. Jaan Pill photo

I wrote in turn:

“Wonderful to read your message, Diane. Pleased you enjoy the stories about the Small Arms Building. I was so pleased to be able to visit today, and to bring some perennials from our own backyard. The work that’s being done is so beautiful to see, in such a great, historic setting. People bring so much enthusiasm and energy to the work.

“I also noted that one gardener had a clipboard. All of the work that I’ve seen around the building, including the April 6, 2015 Sledgehammer Ceremony and all of the other events and projects I’ve seen over the years have all been well-organized.

“I much enjoy the overview of the current project that a gardener has shared with me: 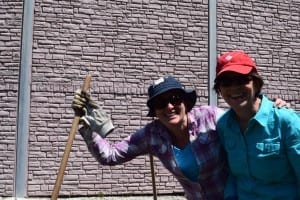 Left to right, Diane LaPointe-Kay and Janice Papineau, part of the team of gardeners planting perennials at the Small Arms Building on May 23, 2015. Jaan Pill photo

“ ‘Basically the garden group is planting five of the raised planters with perennials. We are doing our best to use hardy, native plants, but the plants are being donated by members of the gardening group from our own gardens so we will use what we have to fill them in. The Toronto and Region Conservation Authority is donating mulch and Peel Region the water. This is a small project, but we think it will look much nicer than the weeds currently there.’ ”

Veronica Foster and the National Film Board 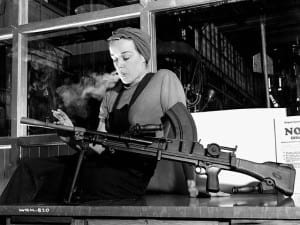 Ronnie the Bren Gun Girl: Veronica Foster. Source: Libraries & Archives of Canada PA – 119766. Veronica Foster was actually a non-smoker, her daughter informed me some time ago. She only smoked for the photo session where this photo and others were taken.

One of the narratives that I recall hearing, at the April 6, 2015 Sledgehammer Ceremony that I attended at the Small Arms Building, is that the women who worked at the Small Arms munitions plant found employment – and continuing pride in their paid work – during the postwar years, rather than being relegated back to the kitchen. I’m reading about the topic of women’s wartime and postwar employment because I want to gain a better understanding of what the evidence indicates, with regard to the topic.

I’m aware that the story is certainly true for Veronica Foster, who was given the persona of Ronnie the Bren Gun Girl during the Second World War. She was a key player, in this regard, in the wartime work of Canada’s National Film Board. 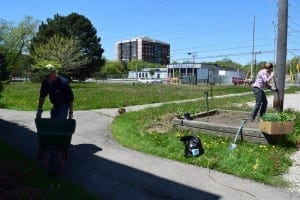 A construction wall (located off the frame to the right) separates the Small Arms Building from the Hanlan Water Project located to the east of it. During a May 3, 2015 Jane’s Walk, Jim Tovey led walkers to a visit to the Hanlan site, followed by a walk along the Waterfront Trail to hear a presentation at the Lake Ontario shoreline, by staff from Credit Valley Conservation and Peel Region, about the Lakeview Waterfront Connection Project. Along the way we viewed the wooden baffles, dating back to about 1910, that remain as remnants from the Long Branch Rifle Range. Jaan Pill photo

After the war she became a model and a big band singer. Her husband was also an entertainer in the same band. Veronica Foster continued to support her family after her husband passed away. She passed away in 2000.

Veronica Foster was a non-smoker 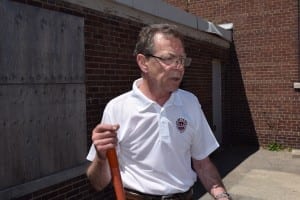 Jim Tovey, at that time the President of the Lakeview Ratepayers Association, and the Lakeview community played a leadership role in ensuring that the Small Arms Building was designated, in 2009, as a heritage property under the Ontario Heritage Act. Jim Tovey is now Ward 1 Councillor in Mississauga and a Region of Peel Councillor. Jaan Pill photo”

Despite the image associated with her “Ronnie” persona, Veronica Foster was a non-smoker. At a Doors Open event at the Small Arms Building, her daughter Julie Guerrette informed me that Veronica Foster only smoked when she was asked to, during the National Film Board photo session that established her persona as Ronnie the Bren Gun Girl.

Her story underlines the fact that things may or may not be what they appear to be.

The NFB photos of Veronica Foster are characterized by elements of  mood-setting low-key lighting familiar to viewers of film-noir movies associated with the gangster genre of prewar and postwar fiction.

Click here for previous posts related to the National Film Board > 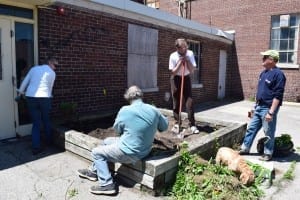 The above-noted posts include a reference to how the widely cited Canadian sociologist Erving Goffman learned about the National Film Board approach to documentary making when he worked at an NFB office during the 1940s.

The posts also refer to the distinction between the NFB approach to documentary making and a vastly different approach developed by the Maysles brothers in the United States.

I’ve been reading about the wartime and postwar roles of women in a wide variety of contexts – including in fiction related to the country, Estonia, from which my parents and older brother escaped in 1944 as refugees during the Second World War as described in a previous post. 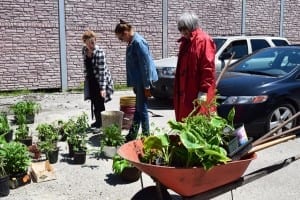 Among the books I am reading is When the Doves Disappeared (2015). This is among the many works of fiction and non-fiction related to military history that a person can read, in order to gain a better understanding of the past and the present. 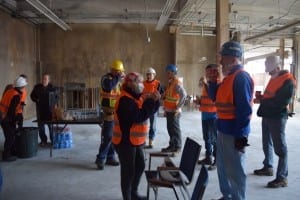 The available evidence indicate that, while progress has been made since the 1940s, much more progress remains to be achieved with regard to how women fare in the military workforce and in the wider society as the following articles, chosen by way of illustration, attest:

A May 2, 2015 CBC article is entitled: “Military has ‘endemic’ sexual misconduct problem.”

A May 6, 2015 openDemocracy.com article is entitled: “The feminist parties redefining Scandinavian politics.”

A June 19, 2015 CBC article is entitled: “Military sexual misconduct: Is there any hope for real change?: ‘You need to change the culture before the behaviour changes,’ expert says.”

Eastern Europe during the Second World War and postwar years

A blurb at the Toronto Public Library website for the When the Doves Disappeared (2015) notes:

“From the internationally acclaimed author of Purge comes a chillingly suspenseful, deftly woven new novel that opens up a little-known yet still controversial chapter of history: the occupation, resistance, and collaboration in Estonia during and after World War II. 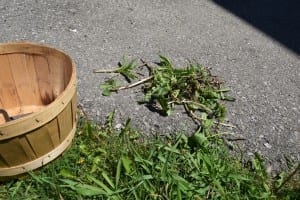 The Small Arms Garden Group is planting perennials and is also pulling weeds that have established themselves around the building. Jaan Pill photo

“1941: In Communist-ruled, war-ravaged Estonia, two men are fleeing from the Red Army – Roland, a fiercely principled freedom fighter, and his slippery cousin Edgar. When the Germans arrive, Roland goes into hiding; Edgar abandons his unhappy wife, Juudit, and takes on a new identity as a loyal supporter of the Nazi regime . . . 1963: Estonia is again under Communist control, independence even further out of reach behind the Iron Curtain. Edgar is now a Soviet apparatchik, desperate to hide the secrets of his past life and stay close to those in power. But his fate remains entangled with Roland’s, and with Juudit, who may hold the key to uncovering the truth . . . 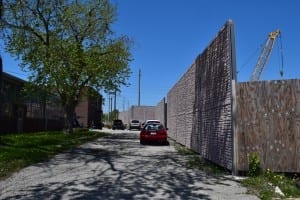 The interior of the back part of the Small Arms Building (to the left of the tree in the photo) has recently been demolished, with the assistance of well-trained Habitat for Humanity Halton-Mississauga volunteers as described in previous posts related to the April 6, 2015 Sledgehammer Ceremony at the building. After renovations, it will serve as a community centre for arts, heritage, culture, and science. Jaan Pill photo 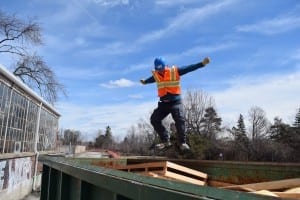 Rick Sirisko of Habitat for Humanity Halton-Mississauga in flight, April 10, 2015 at back of Small Arms Building. Jaan Pill photo 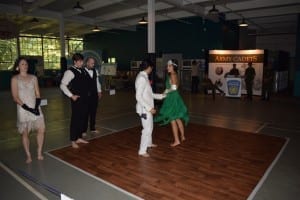 Mississauga-based performance company Frog in Hand presented a special, one-time performance of their latest stage presentation at a Small Arms Doors Open event on Sept. 27, 2014. Frog in Hand creates multi-disciplinary performances in unusual spaces, in this case at the same factory shop floor where weapons were inspected during the Second World War. The view is facing toward the west. Jaan Pill photo

“In a masterfully told story that moves between the tumult of these two brutally repressive eras – a story of surveillance, deception, passion, and betrayal – Sofi Oksanen brings to life both the frailty, and the resilience, of humanity under the shadow of tyranny.” 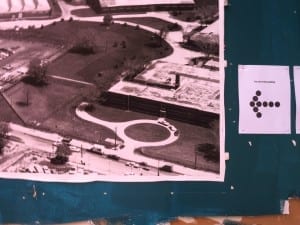 This is an archival photo, displayed at a September 28, 2013 Small Arms Doors Open event, that shows the circular driveway that used to be situated at the front of the Small Arms Building. 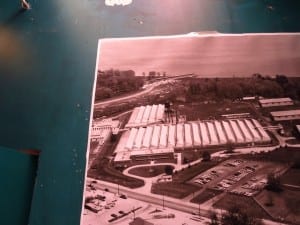 Archival photo from September 28, 2013 Small Arms Doors Open event shows the munitions plant, located east of the Small Arms Building, before it was torn down. The one structure that now remains is the water tower visible in the centre-left area of the photo.

The above-noted blurb brings to mind a May 23, 2015 New York Times article entitled: “Can the Islamic State Survive?”

The larger context, that interests me in particular, is what we can learn about military history – and current affairs – from the vantage point of neuroscience research and evolutionary biology, a topic that I’ve discussed in previous posts:

1960s-era documentary films by the Maysles brothers and The Meaning of Human Existence (2014).

Topics of related interest are discussed at a post entitled:

Empathy is great provided that we use it wisely