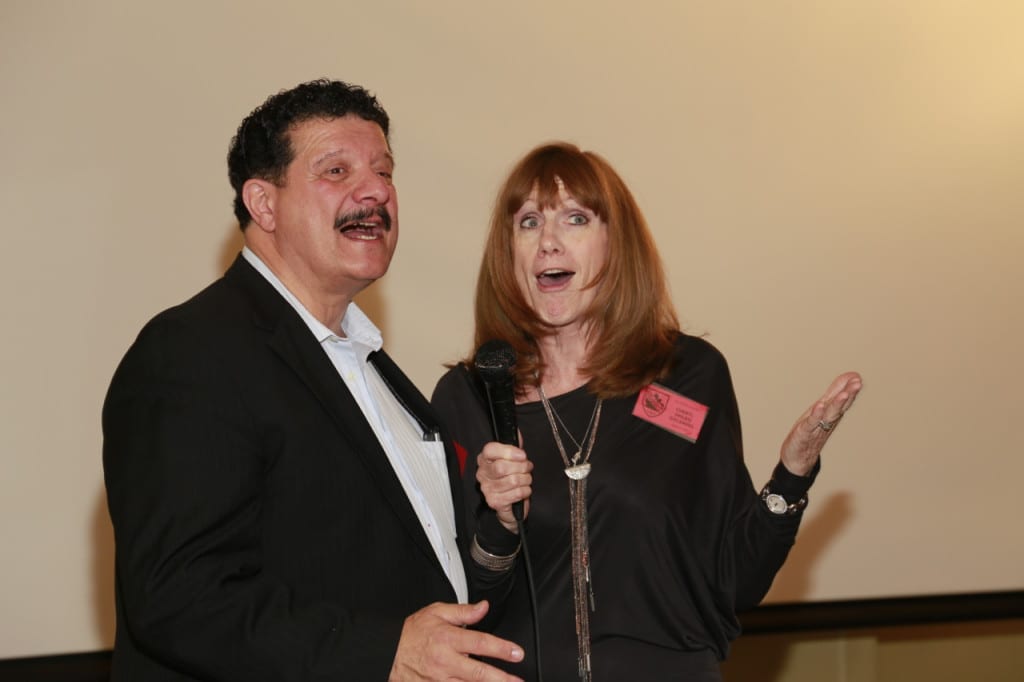 Mark Melkonian (MCHS 1970) and Cheryl (Miles) Goldring sing the MCHS School Song. I’ve chosen to highlight this photo because it serves so well, to remind us of the joy that is at the heart of a high school reunion such as the one that took place on Oct. 17, 2015 at Old Mill Toronto. Walter Psotka photo 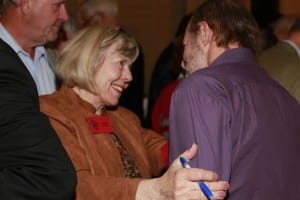 That’s an awesome photo of an MCHS grad greeting Doug Singer (MCHS 1963, on the right). I seek the help of any MCHS grad in identifying the person in the middle. At the upper left in the photo is Colin Webb (MCHS 1963). Walter Psotka photo

Soryl (Shulman) Rosenberg, who taught Phys Ed at Malcolm Campbell High School in the 1960s, has shared the following message regarding a particular organizer’s efforts on behalf of the MCHS ’60s Reunion. 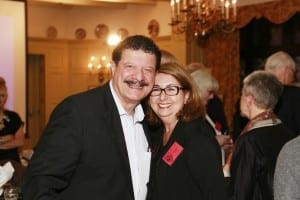 Jaan Pill was must be singled out among all the selfless volunteers who made the MCHS reunion on Oct. 17, 2015 at Old Mill Toronto such a blazing success. It was ultimately his responsibility. Using the business cards as an excuse for mingling and circulating was a great idea from Lynn (Hennebury) Legge, who also arranged for the games and prizes.

The MCHS crests from Nancy (Ingerville) Renz, the scanning of the yearbooks from 1962 to 1974 with the help of many volunteers, the booklet about the history of Old Mill Toronto, the DJ arranged by Gina (Davis) Cayer, arranging for Scott Munro our bagpiper and the videographer and photographer, all takes organizing. 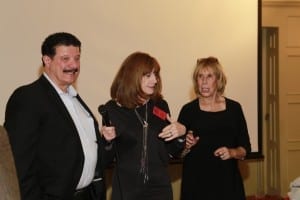 After her well-received presentation, one of the many great highlights of the evening, Soryl (Shulman) Rosenberg, on the right, persuaded Mark Melkonian (MCHS 1970) and Cheryl (Miles) Goldring (MCHS 1967) to come up to the front of the room to sing the Scarlet and the Silver. Walter Psotka photo

Your willingness to give up the room that you had reserved for the equipment when I could not get a room at the Old Mill was so much appreciated. Our numerous emails back and forth took time. And you made it possible for Bob Carswell to enjoy the event by giving him a lift both for the main event and brunch the next day. If the world had more people like you it would be a better place.

Thank you, Soryl, for your highly positive and encouraging overview of the event, and of my own contribution to its success. From our conversations and your message, which I so much appreciate, I’m aware of that you also have extensive experience in the organizing of events. 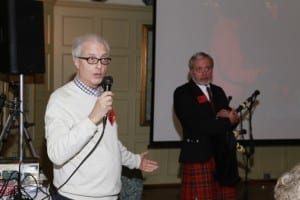 Ron Reim, with the mic, husband of Hannah Reim (MCHS 1968) did a great job as an M.C. introducing the speakers and performers. Here, he introduces Scott Munro (MCHS 1963), who played ‘Amazing Grace’ prior to the Humber Dinner Buffet, and who also gave a brief talk about things he remembered from his days at Malcolm Campbell High School. Walter Psotka photo

It’s wonderful to read your overview of what would have been involved in the organizing of the Oct. 17, 2015 reunion. The organizing was very much a team effort. The staging of the event required a lot of work, many conversations, and much close listening to suggestions from a great many people.

I worked hard, as a member of an organizing team. It was good work, for a good cause. I’m pleased I had the opportunity to help out in this way.

Every person who attended the reunion also added immeasurably to the success of the event. Just arranging for transportation, and accommodations, and sending in a cheque (or arriving with cash at the door): all of this takes time and effort. 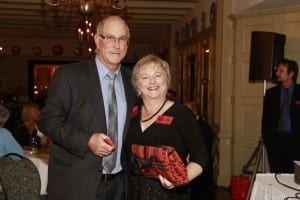 Left to right, Ron Goldenberg (MCHS 1967) with wife Linda Goldenberg. Linda came up to choose the prize, after Ron was declared the winner of the Business Card Game, having collected more cards than any other player. On the right in the photo is James McDonough of Able Disc Jockeys, who did a great job as our DJ for the evening. Walter Psotka photo

I am so pleased things turned out so well, and that your own participation as a speaker was among the highlights of the evening.

You shared with us a message from Graeme Decarie, who taught History at MCHS in the 1960s. You also shared with us an entertaining overview of  your career as a Phys Ed teacher at Malcolm Campbell High School, at a time when you were just a few years older than the students you were teaching.

As well, you achieved great success in persuading a couple of keen alumni, Cheryl (Miles) Goldring (MCHS 1967) and Mark Melkonian (MCHS 1970), to the School Song, once again. As the photos from the event demonstrate, they brought a flair and energy to the task that was a delight to observe, and to hear!

[End of Jaan’s note of thanks] 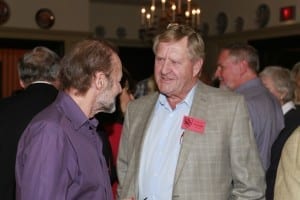 I would like to thank you guys for organizing the MCHS reunion. It was great fun and very interesting meeting people that I had not seen for 50+ years. Some people were relatively easy to recognize, like Scott and Jaan and of course Brian. It was fun to watch people’s mannerisms. The way they walk and move and talk and then …. hey I remember him, or her. People change, but stay the same.

Through your newsletters, I also reconnected with two old friends that did not attend, Tim Hewlings and Allen Jones. Tim and I still live in Quebec and had lunch together a few weeks ago. We will make lunch a yearly event. I hope to see Allen some time next year.

So again, a big thanks for all your work. 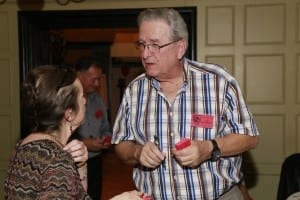 [End of text from Doug Singer]

Wonderful to read your message Doug!

We owe thanks to a great organizing team – and for each person who attended – for making it a great reunion.

I was so interested to read your comments about the mannerisms, the ways of moving!

I’m delighted as well that you are in touch with Tim and Allen. That is a wonderful outcome from the newsletter, edited by Howard Hight and Diana Redden. The newsletter played a key role in keeping people informed about the event, as the planning proceeded. Even now, it’s a primary means of communication for the organizing team. 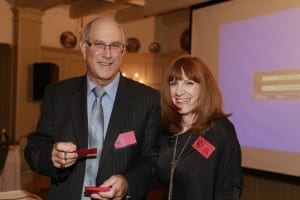 “Just discovered,” Graeme Decarie reports: Book given to him by... PE8.5 Revisions to the tree by-laws: Parks & Environment Committee consideration...
Scroll to top