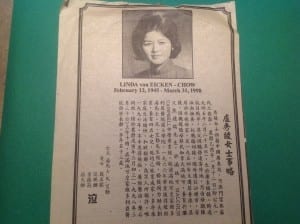 In a previous post, entitled Provisional list of MCHS ’60s (and other decades) students/alumni/teachers who have passed away, we have spoken of Tom von Eicken and Linda Chow: 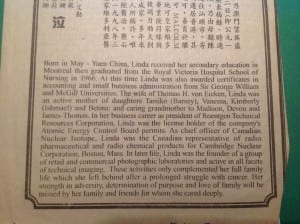 We owe thanks to MCHS grad Susan (Holmes) Nash for sharing with us details regarding the life and career of Linda Chow.

The text in the obituary reads:

Born in May – Yuen China, Linda received her secondary education in Montreal then graduated from the Royal Victoria Hospital School of Nursing in 1966. At this time Linda was also awarded certificates in accounting and small business administration from Sir George William and McGill Universities. The wife of Thomas H. von Eicken, Linda was an active mother of daughters Tamiko (Bursey), Vanessa, Kimberly (Ishmael) and Betina; and caring grandmother to Madison, Devon and James-Thomas. 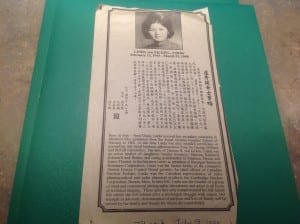 In her business career as president of Roentgen Technical Resources Corporation, Linda was the license holder of the company’s Atomic Energy Control Board permits. As chief officer of Canadian Nuclear Isotope, Linda was the Canadian representative of radio pharmaceutical and radio chemical products for Cambridge Nuclear Corporation Boston, Mass. In later life, Linda was the founder of a group of retail and commercial photographic laboratories and active in all facets of technical imaging.

These activities only complemented her full family life which she left behind after a prolonged struggle with cancer. Her strength in adversity, determination of purpose and love of family will be missed by her family and friends for whom she cared deeply.

Nikki (then called Ellen) King (MCHS 1962) has shared Malcolm Campbell High School updates, from the years that followed the 1960s

A May 10, 2003 obituary notice notes that Tom von Eiken died unexpectedly in Anshan, China on May 6, 2003, after a year and a half of teaching and travelling throughout China, as a legacy to his late wife, Linda.