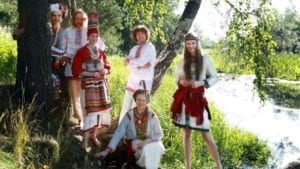 Photo from Jan. 30, 2017 Estonian World article entitled: “One-minute lecture: Why is the number of Finno-Ugric peoples decreasing?” Click on the image to enlarge it,

A Jan. 30, 2017 Estonian World article is entitled: “One-minute lecture: Why is the number of Finno-Ugric peoples decreasing?”

The article includes a link to the lecture.

According to the census, there are 9,614 “other” Finno-Ugric people living in Estonia: Erzyas, Mokshas, Udmurts, Komis, Karelians, Maris, Hungarians, Finns, Ingrians and many others. Overall, there are around 25 million Finno-Ugrians in the world. Still, the number of those who speak Finno-Ugric languages keeps declining, says doctor Natalia Abrosimova of the Tallinn University School of Humanities.

Why and how are Finno-Ugric people disappearing? The main problem among the Finno-Ugric people in Russia is the lack of language policies and nation states in the area. There are not many career or education opportunities for speakers of Finno-Ugric languages. The small amount of people speaking the language and its low prestige prompt a change in language from the native tongue to the majority language.

For a people to exist, they must preserve their native tongue and the culture that surrounds it.

Narcoland (2013) describes a disastrous “war on drugs” that has led to more... Behind the Bricks: Recovering the Stories (oral histories) of the Lakeshore...
Scroll to top