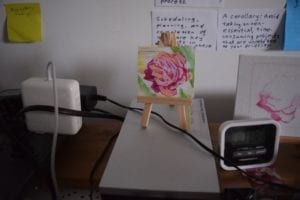 The photo shows a printout of an acrylic on canvas painting, completed in 2016. Jaan Pill photo. Click on the photo to enlarge it.

For many years, I have been thinking, off and on, about water pumps that automatically shut off when there is no water to pump out. On one of my many recent trips to Home Depot a salesperson was very helpful, in pointing out that a pump was available at the store, that was equipped with just such an automatic shut-off feature.

I have tried out the water pump, in order to address anticipated challenges, during the recent days of rain. The pump works well, when the occasion to use it arises. I highly recommend such a pump, in the event you have requirements that would benefit from its features.

What am I here for?

I recall that when I retired from a teaching career, eleven years ago, a friend told me that when I retire, I should always have a clear purpose in mind, regarding the original reason why I went to Home Depot. My friend, Mike James, who is also now retired, shared this precaution with me for a specific reason. He said that he had often observed retired individuals wandering the aisles at Home Depot, in apparent oblivion with regard to the goal, whatever it may have been, that prompted them to enter the store in the first place.

I am also reminded of a time when I walked into the Home Depot at the Queensway and the 427 in Etobicoke and I heard an employee call out my teacher name, which is “Mr. Pill.” It turned out the employee was a former Grade 4 student of mine. He told me about the time he had submitted a plagiarized text as part of some assignment, and how I had indicated, without further reflection, that I would prefer the real goods, and not some product that he’d lifted from somewhere else. I had forgotten about the story, entirely, but was pleased to know it was one of the tales that he remembered, from his encounters with a teacher years ago. 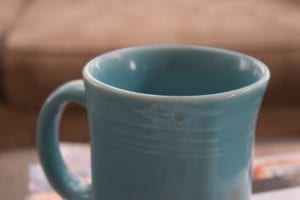 For many years, I’ve been brewing coffee at home, rather than depending exclusively on coffee purchased at coffee shops. The empty space of the cup has a solidity that I find appealing; I am reminded of the discussion by E. H. Gombrich, in Art and Illusion, regarding the ambiguity, with regard to figure and ground, that is a feature of perception in the everyday world. It’s a feature of three-dimensional space that has served as a key starting point for exploration, with regard to representation of form, in the history of Western Art. Jaan Pill photo. Click on the photo to enlarge it.

Every once in a while, I encounter a former teaching colleague, or the mother of one of my students, or on rare occasions an actual student, who remembers the days back when, when each of us was younger.

Whenever I go to the Longo’s store, the one that used to be a Metro store, at Applewood Plaza on the North Service Road between Dixie and Cawthra in Mississauga, I stop to look at a tree in the parking lot. I remember the tree from the summer of 1995, when I got a ride with a friend from Scarborough, where I was living at the time. It was my first visit to the plaza. I don’t know what the reason was, that we stopped there. I knew I had an interview that day, at a school whose name escapes me. After three interviews, one in Brampton and two in Mississauga, I ended up with a teaching job at Munden Park Public School, where I taught until my retirement. That’s the school where, as a Grade 4 teacher in the mid-1990s, I showed my prowess in detecting, and in a friendly way diverting, a plagiarized assignment that came my way one day. 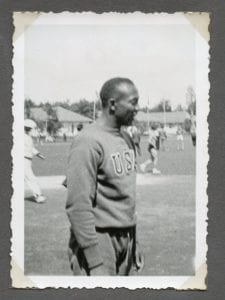 Jesse Owens, Berlin, 1936. Source: Jaan Pill. Click on the photo to enlarge it; click again to enlarge it further.

By way of an intellectual history of the past week, I’ve been reading about the 1936 Berlin Olympics. I have taken out a large supply of Toronto Public Library books and DVDs dealing with the 1936 Olympic Games and the salient events associated with them. One of the topics that has particularly held my interest is the claim that the German long jumper Luz Long offered the American Jesse Owens some very specific advice, prior to the last attempt by Owens to qualify for the finals in the long jump at the 1936 Olympics. Some people have claimed that Long had a conversation with Owens, and advised him to set his starting point just a bit back of where he had been setting it.

Sherman Alexie is a first-rate writer

The concern was that Owens had just one more attempt to qualify, and his previous attempts had led to disqualifications, because his foot was hitting a point that was just in advance of the starting line. Others have claimed that the story, about this great gesture of sportsmanship on Long’s part, was just a tall-tale, promoted to enliven interest in the Jesse Owens story, which ended with Owens winning the long jump, and thus adding a fourth gold medal to the gold medals he had already won in sprint events. Luz Long was killed in Italy in 1943 during the Second World War. Owens kept in touch with Long’s family during the postwar years.

Owens was the star of the 1936 Olympics but when he returned to the United States, he still had to sit at the back of the bus. I’ve been reading a several books about Jesse Owens including one book, I Have Changed (1972), that he wrote with Paul Neimark and find them most interesting to read.

There are so many stories, and so much historical analysis, associated with the 1936 Berlin Olympics, so by way of an intellectual history of the past week, that is definitely a highlight.

During the last while, I also came across a brief comment that Muhammad Ali made, when he was jailed on the occasion of his refusal to be inducted into the American armed forces during the Vietnam War. He said, in so many words (that is, I paraphrase), on that occasion, “So, jail me. We’ve been jailed for the past 400 years.”

During the past week I’ve also been reading short stories by Sherman Alexie, a writer that I had learned about when I attended a movie screening at the Humber Aboriginal Resource Centre not long ago, as noted at a recent post:

Sherman Alexie is a first-rate writer, introducing me to a mindset and worldview that I want to become much better acquainted with.

I have also been reading a recent book by Pankaj Mishra – again, because I have an interest in getting better acquainted with another first-rate writer’s mindset and worldview. I know (or like to think I know) my own mindset and worldview well enough, but I wish to take a step or two beyond that.

I will close this intellectual history of the past week with an excerpt (p. 27) from Conversations with Sherman Alexis (2009):

I woke up before the fight was over, saying, “Wow, that’s a great dream.” I thought, “That’s a title for a story, or it is a story.” I wrote the story as the dream was but it seemed too much a parable. I thought the title would work better as a contemporary story, so I wrote about an interracial romance between an Indian man and a white woman. The theme of the story is the Lone Ranger and Tonto fistfight in heaven. I think this is the theme between all Indian-White relation­ships, not only as individuals, but as races, as colonials to colonized.

I’ve also been reading about the branch of linguistics known as pragmatics, which along with linguistic anthropology and Erving Goffman’s study of social interactions, is a source of ongoing interest to me. Every few months, and sometimes more often, I check Google Analytics to see if anybody actually reads these blogs of mine. I am always amazed to note that a post I wrote years ago about the start of Goffman’s career, in Chicago in the 1940s, is consistently among the most visited pages at the Preserved Stories website. He was indeed a most interesting observer of human life; I am very pleased that what I’ve written about his career is of interest to many people.

De Correspondent: A New Kind of Journalism – A most inspiring May 3, 2017... How to set up a website dealing with local history; some notes about starting...
Scroll to top