[Note to Bob: Can you please let us know the source for the information.] 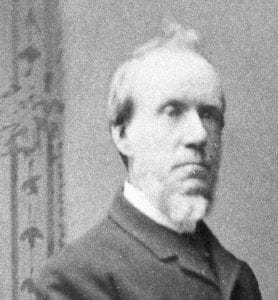 There was a story reported in the Ottawa Citizen many years ago about the back room of Irvine’s Cigar Store located at 29 Sparks Street, one block south of the new Parliament Buildings. I know the story because William Irvine is my great great grandfather.

I also found the original document sent by his son to Sir John A. Macdonald in the Ontario Archives microfilms some years ago. It was a request by William’s son for the Prime Minister to find a position for his father in his later years.

Now, I also believe that William Irvine was an undertaker during his lifetime as he appears in different documents as a polisher and an upholsterer, both jobs of furniture manufacturers who in their day were also the local undertakers. Polishing and upholstering coffins was a big business back then.

Having reached the age of about 57, the work was getting difficult and the son thought an easier job in the government would make things more comfortable for his father as he headed for his later years. It was a day when patronage for deeds done was a certainty.

For many years, the back room of the Irvine Cigar Store was the meeting place of the Prime Minister, the Premier of Ontario and numerous other individuals there to discuss the business of Canada and make deals where necessary that could only be made outside the walls of the Parliament Buildings.

The back room was also special because it held a large potbellied stove in the middle of the room and the politicians could sit around, have a bunch of drinks and discuss the affairs of state in private. For many years it was Sir John A. Macdonald’s private meeting place.

Well, the deal was done, and William Irvine was appointed to the Sessional Staff of the House of Commons where he remained for the next 18 years. Born in 1925, he lived a full 75 years, the majority of which he spent in Ottawa.