I have long been pondering how to approach the writing of a post about my late father’s 1936 Berlin Olympics photo album. 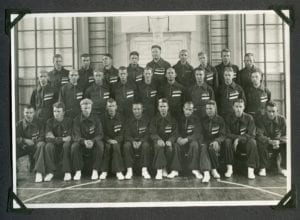 The photo on the right was taken in Tartu, Estonia in 1936 or earlier. The photo, which is available online and is also featured in my father’s 1936 Berlin Olympics photo album, is of group of male university athletes from Estonia, who attended the Berlin Olympics as student observers. Students from all or most of the countries that took part in the 1936 Olympics appear to have sent groups of university-age student observers to the event.

Also featured prominently, in my father’s photo album, is a photo of Jesse Owens, who won four gold medals at the Berlin Olympics. The album includes a Jesse Owens autograph. 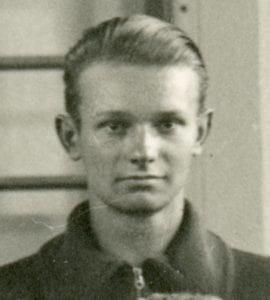 I have been reading extensively about the life of Jesse Owens, over the past several months, and have also been reading several books about the 1936 Summer Games.

It is of much interest for me to look closely at photos of my father from a decade prior to my birth. I did not know him then. I do know there is much information available about the history related to the times in which he grew up, and the times that prompted him and many other Estonians to leave Estonia in September 1944 as refugees.

Over the past few months, I have also been reading as much as I can about the history of the Second World War. I have read much about this topic previously, but since having a close look at my father’s 1936 photo album, I have made a point of doing a great deal more reading. In that way I can, to the best of my ability, picture those times more clearly, in my mind.

I’ve recently been reading many books, including:

The Third Reich at War (2008) by Richard J. Evans’ and two books on strength training,

Bigger, Faster, Stronger: The Proven System for Developing Athletes (2017) by Ken Shepard and Kim Gross; and 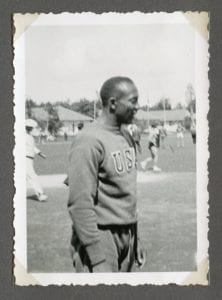 I’ve been reading all three of Richard J. Evans’ trilogy of books about Nazi Germany, as well as several other books addressing the same general themes. The three books in Evan’s trilogy deal with the coming to power of the Third Reich; the Nazi regime in power in the years up to 1939; and the regime at war from 1939 to 1945.

The books about strength training are of interest to me because, like my father, I have a keen interest in fitness. As a regular attendee at the Humber Fitness Centre on Lake Shore Blvd. West, I am currently working on learning to do the Squat and the Dead Lift, as I want to gain proficiency at such compound exercises. The above-noted books are helpful, in enabling me to figure out some of the details for correct performance of these two great strength-training exercises.

As part of my fitness pursuits, I also engage in High Intensity Interval Training, which includes running on a treadmill at two-minute sprints going at close to my maximum running speed.

Whenever I do the HIIT training, three times a week, the level of exertion brings to mind an image, of what it would have been like for my father to be running, at his maximum capacity, in middle-distance running events as a university athlete in Estonia.

I also think, as I am running, as hard as I can, of the tremendous achievements of Jessie Owens, as a champion athlete. His going wasn’t easy, once he returned to the USA after the 1936 Olympics. Yet his achievements continue to inspire many of us, even these many years later. My own father’s achievements, as a student athlete in Estonia also inspires me, as one of the few people, who are still alive who would remember who he was, and what his life was about.

A Sept. 6, 2018 CBC article is entitled: “Trudeau says Canada will formally apologize for turning away German Jews in 1939.”

Photo from Ulrich Laska (MCHS 1963) of Walter Rhead, Kathleen Dawson and Ulrich... When I visit the USA, I adopt the mindset of “the foreign corresponde...
Scroll to top