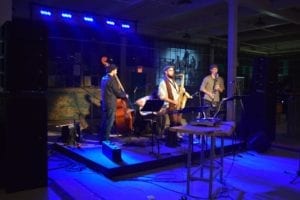 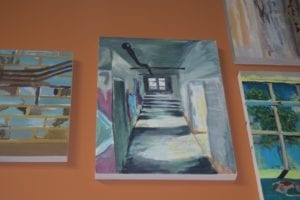 In Situ, Oct. 29, 2016. The image at the centre of the photo makes evocative, engaging use of perspective cues to represent a hallway at the Small Arms Inspection Building. The paintings on display at the October 2016 In Situ event were uniformly engaging and evocative. Jaan Pill photo 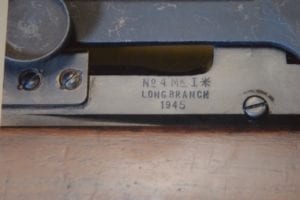 I have been following the Small Arms story for many years.

The story – featuring a successful, community-driven project to preserve and repurpose a Second World War heritage building – is highlighted at a recent post entitled:

As I’ve noted at an earlier post, regarding the first In Situ event, which took place on Oct. 29, 2016, the Small Arms Inspection Building was dramatically saved – through the efforts of local residents working in collaboration with City of Mississauga officials – from demolition several years ago.

Eventually, rather than being bulldozed, it was designated as a heritage building under the Ontario Heritage Act.

What we observed at In Situ on Oct. 29, 2016 – in particular, the bringing together of so many resources, artists, performers, and such a great audience –  has convinced me that the Small Arms Society is off to a great start to its well-planned, collaborative repurposing project on behalf of the Small Arms Inspection Building. 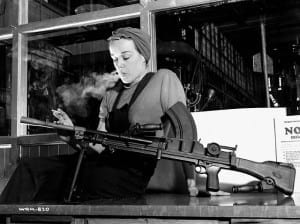 Ronnie the Bren Gun Girl: Veronica Foster. Source: Libraries & Archives of Canada PA – 119766. Veronica Foster was actually a non-smoker, her daughter informed me at a Small Arms Doors Open event some years ago. She only smoked for the photo session where this photo and others were taken. 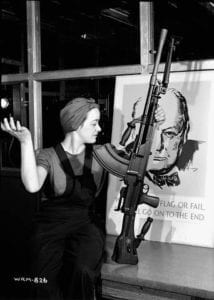 Veronica Foster, a wartime employee of the John Inglis plant in Toronto, was known as Ronnie the Bren Gun Girl. After the war she became a model and big band singer. Source: Libraries & Archives of Canada photo from an Oct. 31, 2016 tweet by Canada’s Military History @CanadasMilHist

Message from Small Arms Society website, regarding In Situ event in November 2018

Following texts are from the Smalls Arms Society website:

In 2016, we held Mississauga’s first multi arts festival, In Situ. 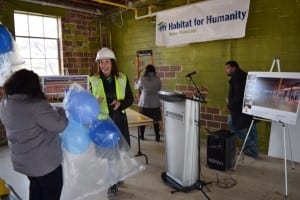 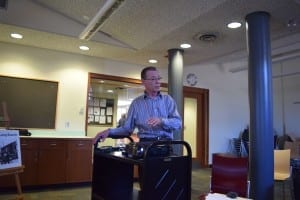 At “Jane’s Walk – How To” meeting at Long Branch Library on April 18, 2015, Jim Tovey outlines history of Lakeview Legacy Project. The image is from a post entitled: Ward 1 Councillor Jim Tovey leads Jane’s Walk in Lakeview (Mississauga) at 12:00 noon on Sunday, May 3, 2015. Jaan Pill photo

It was a hugely successful event that was hosted at the Creative Hub 1352. At the time, 1352 Lakeshore Road E, was in a dilapidated and forgotten state. In Situ 2016 drew more than 2000 community members, students and adults, into this captivating space, just ahead of the City of Mississauga taking over the property and embarking on the first phase of redevelopment. Two years later, Small Arms Society remains committed to the process as community-based stewards of this beloved building, a role recognized with municipal operating funds. 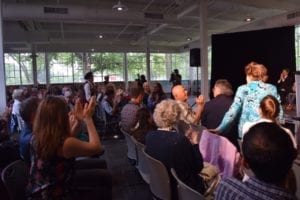 Beginning November 8th saxophone and spoken word will echo from the vaults, video projections glitter along the windows, live drawing, painting and graffiti will energize our corridors. Spontaneous, immersive dance, music, and theatre performances will surprise, delight and pique your curiosity.

Join some of the GTA’s most innovative artists as you explore this unique space. Be part of the adventure and place the SAIB on the cultural map. 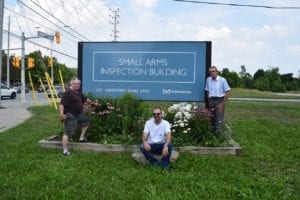 At a series of previous posts, I’ve written about postwar emergency housing in the Greater Toronto Area and elsewhere.

The final photo, at the post you are now reading, was taken during a recent tour of the grounds outside the Small Arms Inspection Building.

During and prior to our tour, on Aug. 5, 2018, I interviewed Ted Long and Garry Burke, who as children had lived in the emergency housing that had been in place in the area for some years after the end of the Second World War.

Our tour of the site brought back many memories for Garry and Ted. At future posts, I will share videos and transcripts of the interviews that I recorded with them in August 2018.

A recent post about the Army Camp is entitled:

An overview of Jim Tovey’s legacy is featured at several posts including:

Jim Tovey, in the course of his remarkably productive life, had enduring and mutually rewarding friendships with many, many people, me among them. Getting to know Jim Tovey, and observing the awesome and inspiring things he was able to accomplish, on behalf of his own constituents and on behalf of the wider Great Lakes community (among other communities where the outcomes of his visionary projects will remain evident, as the years go by), is beyond question among the most enriching experiences I have encountered, in the course of all of my life, and all of my experiences.

Of interest to local history buffs: City background files from 2016 investigation... David Juliusson comments on demolition of the house, built in 1927, where Marie...
Scroll to top