The purpose of the current post is to bring attention to the demolition, in June 2018, of the former house of Marie Curtis, who many years ago served as a celebrated, highly regarded elected official at the Village of Long Branch.

That is to say, David Juliusson of Long Branch has added a comment at a post entitled: 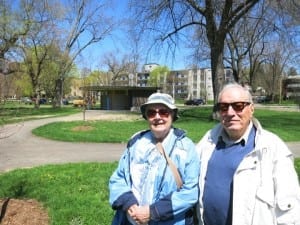 Jane and Sid Olvet of Oakville, visiting Marie Cutis Park Jane’s father was Gresley Elton, who designed many buildings in Long Branch, including the building in the background of this photo. Jaan Pill photo

Another one happened this June. Marie Curtis house at 10-31st was torn down. Built in 1927 it is where she lived while the Reeve of Long Branch. It was totally intact. There was zero interest from either the Committee of Adjustment or the Long Branch community to preserve her house until after it was torn down.

That is for certain part of the story of Long Branch. What remains of her legacy is the name of the nearby, celebrated park and stories about her. Among the stories, the accuracy of which I cannot vouch for, as I do not currently have a way to verify or corroborate them, are the following:

Many years ago, so the story goes, a meeting was held with the intention of closing down the Long Branch Public Library, a building designed by a Long Branch architect of a previous era, who had also designed the former Parkview School, the current version of James S. Bell school, and several small buildings at Marie Curtis Park along Forty Second Street. 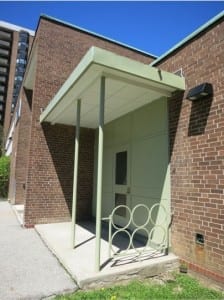 Anyway, the story goes that, at the meeting, the discussion was about the closing of the library. An older woman, very formidable in her demeanour, who as it turns out was Marie Curtis, walked up to the front of the meeting. She spoke, as I understand, in a manner that held the close attention of those in attendance. She explained why, in her view, the library deserved to stay open. Open it remains, to this day.

A second story concerns a meeting at which Frederick G. Gardiner and Marie Curtis were both present. At one point, Gardiner remarks, so the story goes, that for a person of such a short stature, Curtis has a big mouth, as she is always speaking out. To which Curtis is said to have responded, and I paraphrase, “I may be small of stature, Fred, but I was elected to the office that I hold. I wasn’t appointed, as was the case with you.”

The architect I refer to is Gresely Elton, highlighted at previous posts including:

Elton Crescent in Long Branch is named after J.O. Elton, reeve of Long Branch and brother of architect Gresely Elton

Some years ago, on a couple of occasions, I interviewed Jane Olvet of Oakville, daughter of Gresely Elton, who told me about how her mother and father first met, in the early 1900s at a Long Branch Park tennis court – not that far from where Marie Curtis once lived. The following post refers to the tennis court:

My first video recorded interview with Jane Olvet took place some years before I developed a real interest in the local history of Long Branch. At that time, when Jane and Sid Olvet visited us in Long Branch, I was so taken with Jane’s stories about life in Long Branch many, many years ago that I felt that it would be a great idea to record some of her stories and reflections.

View of new main entrance stairs, one of many upgraded landscape features at École élémentaire Micheline-Saint-Cyr – formerly Parkview School – at 85 Forty First St. in Long Branch. The school was designed by Gresely Elton. Image is from a recent post entitled: I became a supporter of Pamela Gough in 2011, when she played a key role in ensuring that Parkview School, near the Long Branch Go station, stayed in public hands. Jaan Pill photo

These recordings are among the large stock of audio and video recordings that I will be working with, through a process of editing, transcribing, and in other ways processing, at my writer’s retreat in Stratford.

What really struck me, from the first interview with Jane Olvet many years, was her remark that, for many years, she didn’t want to talk about Long Branch. So many people, including her parents, were now gone, with the passage of the years. On that visit to Long Branch, we walked up and down the streets, and Jane pointed out who had lived where, and she spoke of the pathways through open fields that she took to go to and from school each day.

For some days after recording my interviews with Jane Olvet that day, the following thought lingered in my mind, and stayed with me, in a powerful way. The thought was, and I paraphrase: “It’s really remarkable, how much has come and gone, in this community as in any other. Relatively speaking, we are on this earth for such a short time. Lives are fleeting. All things come and go.”