I much enjoyed the Etobicoke-Lakeshore Campaign Kick-Off BBQ at Peter Milczyn’s Campaign Headquarters. 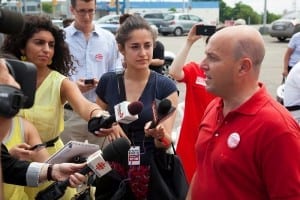 I’m serving as a volunteer in Peter Milczyn’s by-election campaign.

My support is in continuation of my support for Etobicoke-Lakeshore MPP Laurel Broten, who ensured that Parkview School in Long Branch remains in public hands.

I was also impressed with a speech that Peter Milczyn gave at the Etobicoke York Community Council on April 21, 2011 when the first attempt was made to arrange for heritage designation of the Amedeo Garden Court buildings, also known as the Mimico Estates, in Mimico. He spoke eloquently of the value of heritage designation in such a case. A recently published overview regarding redevelopment plans related to Mimico can be found here.