Each walk is two hours, and will begin on May 3 and May 4 at 10:30 am – rain or shine – at the East Parking Lot at Marie Curtis Park. Each walk will have many new features. We like to ensure that we have new content each year. If you’ve attended our Long Branch Jane’s Walks in previous years, please join us again.

We’re not like the high school teacher of old – from a previous era, that you may be familiar with – who reads from the same set of laminated notes, one year after the other. As walk leaders, we like to keep on learning new things. We also know that all participants in a Jane’s Walk like to keep on acquiring – and sharing in our walking conversations, in a process of continuous learning – all manner of new, updated information about our local neighbourhoods.

You can access details about the Saturday, May 3 walk here.

The walk is entitled:

The overview for the May 3 walk is as follows: 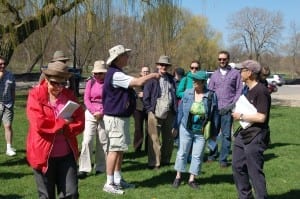 The Lakeview Waterfront Connection Project seeks to redevelop the Arsenal Lands located to the west of Etobicoke Creek in Mississauga. The area has been the site of 120 years of military, utility, and industrial pollution. The project began with the community-initiated Lakeview Legacy Project. Central to the redevelopment is Inspiration Lakeview and the Lakeview Master Plan.

Years ago, the Lakeview Ratepayers Association developed a unique “3P” – that is, Proactive, Persistent, and Positive – strategy, to ensure that redevelopment of the Lakeview area was to everybody’s benefit. That is, planning solutions were developed based on the principle that what emerges includes no losers.

A stretch of beach along the Lake Ontario shoreline, west of Etobicoke Creek, has been the topic of many conversations over the past year. A unique feature of the sand beach story – which is closely connected to the Lakeview redevelopment – is that the west beach of Marie Curtis Park is actually in Toronto. It’s easy for people to imagine that at Marie Curtis Park, whatever is east of Etobicoke Creek is in Toronto, and whatever is west of the creek is in Mississauga.

In fact, south of Lake Shore Blvd. West, Etobicoke Creek used to have a western branch, as well as a southern branch that emptied into Lake Ontario quite some distance to the west of where the channelized version of the creek is now located.

The Toronto-Mississauga border is based on where Etobicoke Creek used to run, before the western and southern branches were filled in during the 1950s. Some time back, there was a plan to remove the sand beach, as part of the Lakeview project, and replace it with pebbles. However, in time it was decided to preserve most of the beach as it is.

You can access details about the May 4 walk here.

The title of the second walk is:

The overview for the May 4 walk reads: 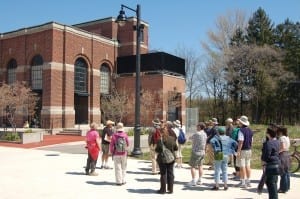 Humber College now has a campus at the Lakeshore Hospital Grounds in New Toronto, just east of Long Branch. The photo is from the May 2013 Long Branch Jane's Walk. Gay Chisholm photo

Long Branch is located on Lake Ontario next to Mississauga. The first visitors to the area were Paleo-Indian nomadic hunters who arrived about 10,000 years ago at the end of the last Ice Age.

In 1793, Colonel Samuel Smith, a veteran of the American Revolutionary War, received a grant of land that extended across all of Long Branch. In 1797, he built a log cabin close to Etobicoke Creek not far from Lake Ontario. The cabin, to which extensions and siding were later added, remained in continuous use for about 152 years until around 1949 before it was torn down to make way for a school in 1955.

That school was until recently known as Parkview School.

In 2010, the local community learned the school was about to be sold. A letter writing campaign, and the efforts of many people, ensured that in August 2011, the Ontario government made a decision – by releasing $5.2 million – to ensure the school would stay in public hands.

The campaign to save the school noted that a preliminary “dig” in 1984 had established that the archaeological remains of the colonel’s homestead were buried under the school grounds of Parkview School.

Along our route, we’ll stop at Parkview School and the Lakeshore Hospital Grounds. Our final stop will be the Fair Grounds Organic Roastery and Café at Twenty Fourth Street and Lake Shore Blvd. West.