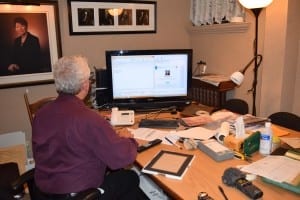 Walter Psotka sends an email to Jaan Pill with an attached file of the photo of Walter and Jaan that appears at this post. Next to him, near his right elbow, is a frame, of the kind that he will use to frame photos sold at the reunion. Jaan Pill photo

Walter will set up a printer in the foyer outside the Humber Room on Oct. 17. Each attendee will be able to purchase framed photos, $10 (including tax) for a 6×8 print with an accompanying presentation folder, to ensure you don’t get fingerprints all over the photo. 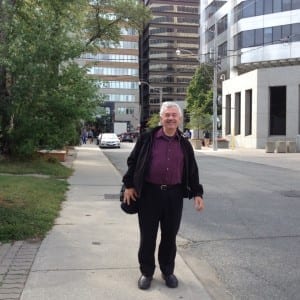 As part of the registration process, I will take a photo of each attendee, with each person’s name tag in view, so that we can later match up our group photos, and other photos, with our respective names.

A selection of Walter’s photos will be included in our post-reunion documentation at the MCHS 2015 website.

In the event that you do not wish to have your photo, or a video of yourself, appearing at the MCHS 2015 website, or at Facebook pages associated with the reunion, please let me know as soon as possible, so that we can plan accordingly. 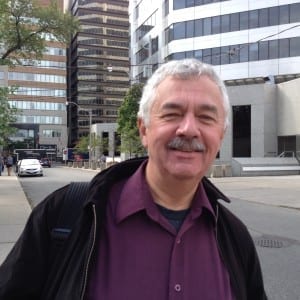 Photos that capture a moment in time

Professional photography is often a performance, which serves to capture a subject or subjects when they are in conversation, or in the midst of some activity. This is something that I’ve learned from Walter.

I’ve often thought about how photography works, when I’ve been taking photos of members of the MCHS 2015 Event Committee, at our meetings in Kitchener and elsewhere. Often the best pictures are when people are getting ready to pose, or when they have stopped to look at something, or are engaged in conversation. 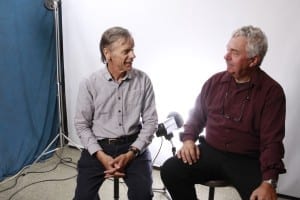 We are looking at a reunion that focuses on people meeting 40 and 50 years after attending a particular high school.

I’ve recently learned about a 60-year reunion of a high school class, that will be taking place in the United States, on the same evening as the MCHS 2015 reunion.

Through my recent conversations with Al Ablowich of Virginia Beach, I’m aware that a 60-year high school reunion is taking place in the United States (I’ll have to check my recording, when time permits, to confirm in which city) on Oct. 17, 2015. 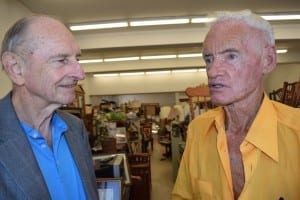 Al Ablowich in discussion with Bill Rawson at Bill’s furniture store located across the street from the Long Branch Library on Lake Shore Blvd. West. Over the years, I’ve posted many items, including a few videos, featuring Bill Rawson’s recollection of Long Branch in the 1940s and in more recent decades. Jaan Pill photo

I met with Al Ablowich in Toronto on Sept. 10, 2015, the day after the MCHS 2015 Event Committee meeting in Kitchener, and introduced him to a couple of area old-timers, who know the history of Long Branch (Toronto not New Jersey), where I live, really well.

I’m pleased to share a few photos from his visit to Toronto.

Al Ablowich, who was visiting a cousin in Mississauga, has a close family connection to Long Branch, and so we had the opportunity to spend several hours visiting sites of historic interest in the community. In particular, Al has a close connection to the Eastwood farm that used to exist where the former Parkview School is now located.

I was so interested to know of Al’s wife’s 60-year high school reunion, taking place on Oct. 17. Al Ablowich and I spent several hours, driving and walking around Long Branch. I was able to point out all manner of details, that he was most interested to learn about. 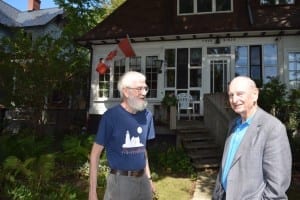 Left to right, John Easton and Al Ablowich in front of John’s house near where the Long Branch Hotel was located until it burned down in 1958. Jaan Pill photo

Geological history of the Humber River

Scott Munro (MCHS ’63) has added a comment regarding the physiography... Why lower is better for your heart
Scroll to top