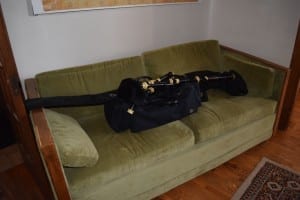 Scott Munro will play “Amazing Grace” at about 7:25 pm on Oct. 17 in the Humber Room just before the Humber Dinner Buffet begins. Jaan Pill photo 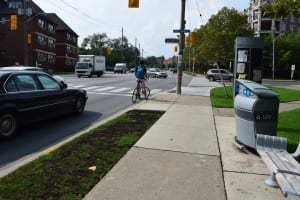 Scott Munro (MCHS ’63), a member of the MCHS 2015 Event Committee, has added a comment to a previous post. The topic concerns land formation processes that have occurred tens of thousands of years ago where Old Mill Toronto is now located. In geological time, the Old Mill site was once under a glacier whose thickness was measured in kilometres. When the glaciers of the last Ice Age were melting, the site was heavily influenced, in its physiographical features, by massive flows of water, which which helped to shape the river valley now evident in the area. That’s the gist of my understanding of some of the many drawn-out geological events that have occurred here in the past. That’s the extent of my own vague understanding of these matters and I’m always keen to learn more. 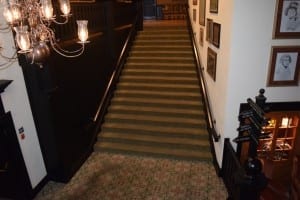 These stairs lead from the first to the second floor, where the Humber Room is located. Jaan Pill photo

Hi Jaan – This relates to item 3) in your blog. Part of what you write there relates to the location of the Lake Iroquois shoreline, on which Casa Loma is situated further east. Also, the Humber River underfits its current valley which was likely a spillway for large amounts of meltwater produced by the decaying ice cover of the Laurentide Ice Sheet, amounts that probably did not occur again until the arrival of Hurricane Hazel or previous unrecorded storms.

Lake Iroquois drained out through the Mohawk Valley of New York State to the Hudson, then shrank into the current space of Lake Ontario, after which time the outflow was redirected down the St. Lawrence River because by then the ice sheet no longer blocked the St. Lawrence Valley. Best – Scott 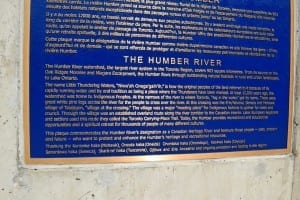 At the bridge that crosses the Humber River along Bloor Street West, you can see a plaque about the Humber River, a detail of which is included in the photo. The text is set in a very wide column, which makes for difficult reading. Nonetheless, the text is of interest and warrants a close read. You can read it if you click on the image, and click again. Jaan Pill photo

A brief history of the Lake Iroquois shoreline

A brief history of the Lake Iroquois shoreline in Toronto

The article includes a Wikipedia link; speaking for myself I tend to stay away in most cases from relying on Wikipedia as a source for any topic.

That said, the above-noted article displays the following map, which I find very helpful:

From a close-up view of the map, you can see that the Lake Iroquois shoreline was located a significant distance north of Old Mill meaning that during the existence of the lake, Old Mill was underwater as was the case with the area that is now downtown Toronto. At the point where the waters of Glacial Lake Iroquois receded to their temporary limit, the shoreline of the smaller lake (known as Glacial Lake Admiralty whose shoreline is still in place underwater) ended up a considerable distance to the south of Old Mill. 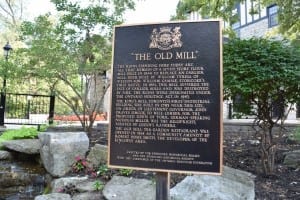 Plaque next to Old Mill Restaurant highlights local history as it relates to Old Mill Toronto. Click on the image, then click again, in the event you wish to read the plaque. Jaan Pill photo

In time, when the current version of Lake Ontario made its appearance, the shoreline of the lake was near Old Mill. However, in the past four hundred years, the shoreline of Toronto has wandered a ways further south, thanks to the building up of land through infill. Similarly, Fort York used to be at the shoreline but thanks to landfill, the shoreline has moved a considerable distance to the south.

The scale of geomorphological processes, evident in the vicinity of Old Mill Toronto, is remarkable. As Scott notes, Glacial Lake Iroquois has played a key role in  the geological history of the area. 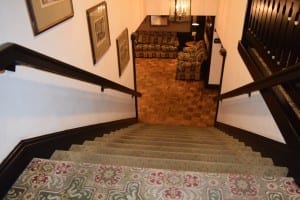 When you walk through the entrance to Old Mill Toronto where the semicircular driveway is located, near the corner of Old Mill Trail and Old Mill Road, and turn left once inside the building, after some walking you will arrive at the location in the photo. In the middle of the photo you see a landing, which is where the foyer outside the entrance to the Humber Room (to the left, but hidden from view in the photo) is located. The latter room is where the MCHS 2015 reunion takes place on Oct. 17, 2015.  Jaan Pill photo

According to the available archival evidence, September 1615 was the first time that a European set eyes on Lake Ontario. We can add that, as noted above, four hundred years ago the shoreline of the lake was located close to where Old Mill Toronto now stands. 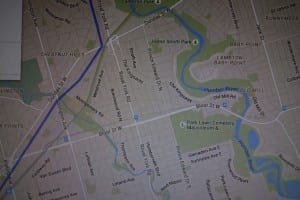 The image is from a screen grab (using a digital camera) of a Google Map image from the Lake Iroquois Shoreline link accessible at the post you are now reading. The dark blue line at the left, running for part of its distance roughly parallel to Dundas Street West, shows where the Iroquois Lake shoreline was located, in the area to the west of Old Mill Toronto.

Our reunion is taking place in a natural setting, a green space in the heart of an urban environment. As a June 15, 2015 Atlantic magazine article notes, “spending time in nature is correlated with better mental health, attention, and mood in both children and adults.”

Beware the waterfront trail to the west of the Humber River; many collisions... MCHS ’60s reunion on Oct. 17, 2015: Walter Psotka will perform as our...
Scroll to top