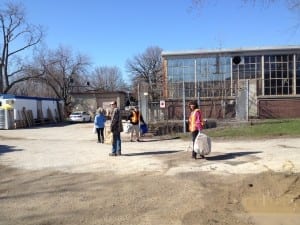 April 23, 2016: Volunteers prepare for several hours of clean-up in the Arsenal Lands where the Small Arms Building is located. On right is south end of Small Arms Building; on left is woodlot where a TRCA/Sawmill Sid portable sawmilling ash-tree salvaging project is now underway. Jaan Pill photo

What follows are some highlights of a Saturday morning helping out with a Clean-Up Day at the Small Arms Building in Lakeview, Mississauga.

When I turned up around 10:00 am on Saturday, April 23, 2016 at the Small Arms Building, I was greeted by a volunteer who helped me and other volunteers get organized.

We had been advised previously to wear sturdy clothes and solid footwear, which advice I was pleased to follow.

On my arrival at the work site, I signed in at the registration desk and received a safety vest, to ensure that people could see me while I was wandering around picking up litter at the Arsenal Lands.

I also received a pair of work gloves, and a device that you hold in your hand, to pick up litter. The device is very handy as it reduces wear and tear on your back, in the event you spend a few hours picking up litter. 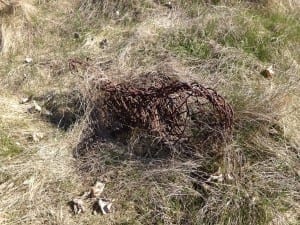 Some debris, left over from the days when the Small Arms. Ltd. was in full production, during the Second World War, are embedded in the earth. It remained where it was. Jaan Pill photo

I also received a huge, heavy-duty garbage bag, for the litter at the Arsenal Lands that I would be picking up.

It was beautiful to see such a well-organized plan in place, for getting the volunteers organized at once, as soon as each person turned up at the site. Each volunteer had the equipment to get out there, and do a good job, and do it safely.

This kind of good planning and attention to detail is what prompted me, years ago, to start doing volunteer work on behalf of the great initiatives that are in place in Lakeview, Mississauga, as I’ve briefly outlined in a recent post:

I was reminded, as well, of the attention to detail, and to safety, when I visited the Small Arms Building a year ago, on April 10, 2015, when I came to observe the volunteer work that members of Habitat for Humanity Halton-Mississauga were doing, at the south end of the building, as outlined at a post dated April 17, 2015: 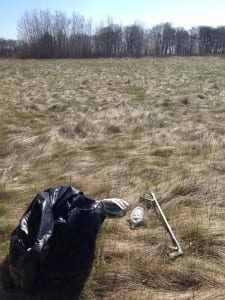 Having found one of many water bottles in a field during a walk in a southern direction heading toward Lake Ontario (in the background behind the trees), I stopped for a moment to document the scene. Jaan Pill photo

Having spent some time living out in the bush about forty-five years, across the wilds of British Columbia, during a year off from university while working in the lumber industry to pay off some debts, I could note at once where the greatest treasures of trash would be.

They would be under trees, in relatively inaccessible areas, where people would have likely been spending time at night, on the Arsenal Lands. I found several choice locations and in no time, my garbage bag was packed full of debris from such late-night and other usage of the Arsenal Lands.

My bag was so heavy that, although I’m in reasonably good shape, as I lift weights three times a week, I couldn’t go more than about twenty paces, before I had to stop to catch my breath, as I dragged my bag to its destination.

I began my journey at a clump of woods a short ways southwest of the water tower, a key landmark on the Arsenal Lands. 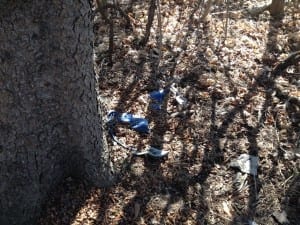 Once I had dropped off my bag, leaving it alongside a batch of filled-up garbage bags, where some vehicle would later take them away, I dropped off my gear at the Small Arms Building and then proceeded to walk back home.

I live not far from the Small Arms Building, in Long Branch on the Toronto side of the Toronto-Mississauga border.

A month earlier, I would have been driving my car, a 2001 Mazda Protege, but I donated the car to the Kidney Foundation some weeks ago, as the car had finally consumed its last tank of gas.

By that point, the brakes, which had been making a delightful, growling sound, had finally stopped acting up and had become ominously silent, having pretty much given up on the task of doing their assigned work.

For now I depend upon a Zipcar when I need a car, and for the rest of the time, I do an enormous amount of walking.

Later the same day, Saturday, April 23, 2016, I walked back to the Small Arms Building all over again, as I wanted to spend some time taking photos of progress at the TRCA/Sawmill Sid project at the key work area, for this portable sawmilling operation, at the south end of the Small Arms Building. That will be the topic of my next post.

The photos at the page you are now reading have been taken with an iPhone. I like to use the iPhone when I don’t have a DSLR camera (which is heavier to carry) with me. For other situations, I like to use a DSLR.