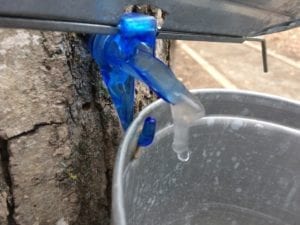 One of the handy, concise signs at the Terra Cotta Conservation Area notes that sap directly from the tree is 2-3% sugar and 97-98% water. Jaan Pill photo

Some time back, I described a family visit to the Limehouse Conservation Area:

Limehouse Conservation Area a great place to visit on a warm, sunny day in September 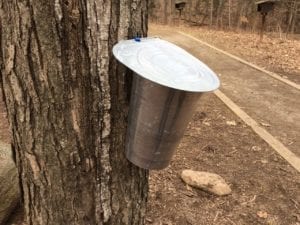 We’re keen to learn about the trails including the Bruce Trail in the vicinity of the Terra Cotta Conservation Area. On this occasion, we got to know the area and are keen to learn more. 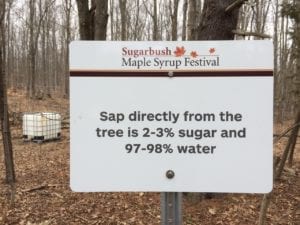 There’s a lot of research available, about the great benefits – to physical and mental health – of spending time in the midst of nature in settings such as conservation areas. We much enjoyed our recent visit to Terra Cotta and look forward to additional visits. There’s much to be said for the sheer enjoyment of physical exercise, walking along trails in the countryside. 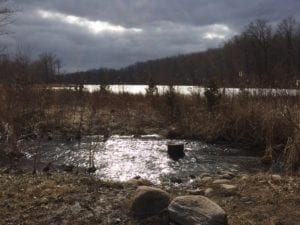 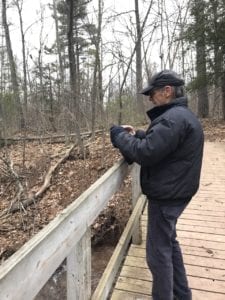 At one point, we stopped at a small, rustic building that featured demonstrations of tools used in years past for maple sugar gathering. We also viewed sap being boiled down over open fires, after being freshly gathered from maple trees.

As well, we saw a system of tap lines, which enable the gathering of sap from many trees at once. One of the signs we encountered notes that squirrels and deer like to nibble at the lines, because they enjoy the taste of maple sugar.

Another sign along a trail notes that Canada produces 71% of the world’s maple syrup and that 91% of Canada’s maple syrup is produced in Quebec. The text at the above-noted sign includes a minor spelling error which, however, you are not likely to notice in a quick reading of the text. I only noticed the error when I looked at a photo of the sign, after I got home.

The sign in question refers to “71% of the words maple syrup” in place of “71% of the world’s maple syrup.” As a retired elementary teacher, such minor details of life attract my attention. Our formative experiences – in my case, experiences related to the teaching of spelling in my career as a teacher – gathered during whatever lines of work we have embarked upon in years past, tend to stay with us.

We caught a few moments of one of the outdoor demonstrations related to maple syrup, during which it was mentioned that First Nations peoples originally introduced maple syrup gathering to (what can, I would say, be described as an invasive and slowly but steadily encroaching) settler society. Some details, regarding the gathering of maple syrup prior to European settlement, can be found at the Canadian Encyclopedia website.

We stopped at a huge tent, where pancakes were being prepared for sale on-site. That made for an enjoyable pancake snack topped off with maple syrup and butter. 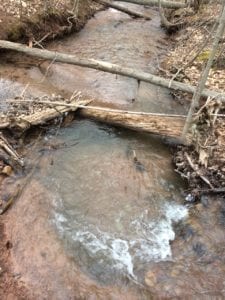 I much enjoyed seeing (and listening to) a stream that runs through the woods in the area. Jaan Pill photo

As well, we visited a central building where you could buy maple syrup. Outside the building a campfire had been set up where you could get warmed up. The campfire reminded me of stories I’ve been reading about soldiers from the opposing armies at the time of Napoleon’s invasion of Russia in 1812 (see below), warming themselves by campfires, in the effort (sometimes successful, sometimes not) to survive in subfreezing temperatures.

When I walked across a footbridge over a stream along one of the trails in the area, I thought about all that I have read about Napoleon’s fatal march on Moscow in 1812. Many horses, soldiers, women, and children lost their lives trying to cross streams and rivers especially during the retreat by Napoleon’s army in the winter of 1812. When I look at a stream now, running along and murmuring peacefully, I think of all the accounts I have read, about the Napoleonic wars.

Maple syrup is pretty much the same as regular sugar

Maple syrup is pretty much the same as regular sugar – unlike sugars that naturally occur in fruits, vegetables, and dairy products, which are in a separate category (see link below).

We tried a bit of fresh maple taffy, prepared from maple syrup over a block of ice. I had just a bit as I like to limit my intake of sugar. It was delicious. 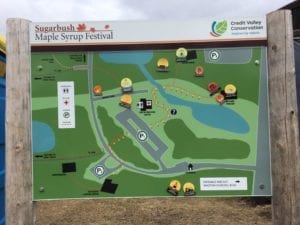 Credit Valley Conservation consistently demonstrates excellence in graphic design. CVC excels in the application of art and design in service of the public good, and in service of the natural environment. It was the quality of CVC’s communications strategy that first attracted my attention, years ago, to its outstanding work. Jaan Pill photo. Click on the photo to enlarge it; click again to enlarge it further.

Maple syrup isn’t any better for you than plain sugar, so it’s not a great idea to go overboard, as is noted at a previous post entitled:

The Terra Cotta Conservation Area is operated by Credit Valley Conservation, an organization that I’ve written about extensively.

How to find your Walk Score (as in, how walkable us your neighbourhood?) March 11, 2018 Toronto Star article about Humber Bay Shores brings to mind that...
Scroll to top