The issues related to a proposal for a homeless shelter near Islington Ave. on Lake Shore Blvd. West give rise to many insights

Much discussion, regarding the site that almost became a shelter, at 2950 & 2970 Lake Shore Blvd. West in New Toronto

My friend Mike James, with whom I’ve organized many Jane’s Walks in South Etobicoke during the years I lived in Long Branch, knows the area well as he lived for a while around the 1960s at 2911 Lake Shore Blvd. West.

So many strands of local history (and also wider histories: history of deinstitutionalization going back to the 1960s; history of housing affordability; history of deindustrialization in New Toronto and elsewhere) converge at such a location. I’m also reminded of the history of the nearby Lakeshore Hospital Grounds, a topic I’ve written about extensively. Many good things are happening in this area; a post from four years ago comes to mind: Humber College Lakeshore Campus Grand Openings took place on Jan. 26, 2017. 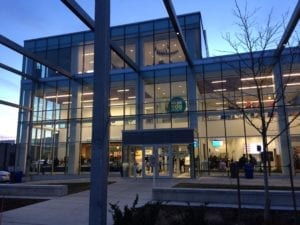 As noted at a post from Jan. 26, 2017, the Lakeshore Student Welcome and Resource Centre is located at the corner of Kipling Ave. and Lake Shore Blvd. West. Jaan Pill photo

Mike James, who now lives in Niagara-on-the-Lake, remembers this area of Lake Shore Blvd. West as being a needy community going back many years, with many people leaving the former psychiatric hospital in the years of deinstitutionalization with no support. He remembers seeing indigent men sitting on the old post office steps at the corner of Seventh Street and Lake Shore from his family’s front windows.

If I remember correctly, Mariana Valverde has a chapter on this stretch of Lake Shore Blvd. West in Everyday Law on the Street: City Governance in an Age of Diversity (2012).

Toronto prides itself on being “the world’s most diverse city,” and its officials seek to support this diversity through programs and policies designed to promote social inclusion. Yet this progressive vision of law often falls short in practice, limited by problems inherent in the political culture itself. In Everyday Law on the Street, Mariana Valverde brings to light the often unexpected ways that the development and implementation of policies shape everyday urban life.

Drawing on four years spent participating in council hearings and civic association meetings and shadowing housing inspectors and law enforcement officials as they went about their day-to-day work, Valverde reveals a telling transformation between law on the books and law on the streets. She finds, for example, that some of the democratic governing mechanisms generally applauded – public meetings, for instance – actually create disadvantages for marginalized groups, whose members are less likely to attend or articulate their concerns. As a result, both officials and citizens fail to see problems outside the point of view of their own needs and neighborhood.

Taking issue with Jane Jacobs and many others, Valverde ultimately argues that Toronto and other diverse cities must reevaluate their allegiance to strictly local solutions. If urban diversity is to be truly inclusive – of tenants as well as homeowners, and recent immigrants as well as longtime residents – cities must move beyond micro-local planning and embrace a more expansive, citywide approach to planning and regulation.

The January 2021 report to the City of Toronto mentioned the South Detention Centre, a facility about which I’ve written many posts over the years.

As noted at one such previous post, the visitors centre at the Toronto South Detention Centre looks spacious and airy.

Over time I have learned that surface appearances based on architectural details at the detention centre can be misleading; in this context one of the subsequent posts about the facility is entitled: February 2017 Toronto Life article describes Toronto South Detention Centre as ‘$1-Billion hellhole’; January 2020 Etobicoke Guardian article indicates ‘inhumane’ conditions persist.

As Mike James has noted in a recent email, given rise in house prices, there is not much reason for optimism that a solution to problems in the area will be found anytime soon. That is a thought that occurs to me as well. The problems, as is the case across Ontario, tend to be longstanding and long entrenched.

In years past, as part of my research about land use issues in the Toronto area, I subscribed to the Novae Res Urbis newsletter. I was always impressed, when reading the newsletter, with the good intentions of report writers who would speak optimistically of next steps in the amelioration of this or that social issue affecting this or that segment of area residents. Such efforts are commendable. The challenge concerns the actual results on the ground, when you revisit the situation in the years that follow.

A related post that comes to mind is entitled: Poor reading, writing and numeracy skills in adults make up a literacy gap in Canada with consequences for both democracy and the economy: CBC, Jan. 17, 2021.

I mention these things by way of underlining the challenge. Under the right conditions, great progress can be made, whatever the challenge may be that comes to mind. A most impressive case study involves the launch of bicycle culture in Amsterdam starting in the 1970s. That is a success story that inspires me tremendously. The success that some countries such as New Zealand, South Korea, and Taiwan have achieved to date in addressing COVID-19 similarly inspires me tremendously.

Much discussion, regarding the site that almost became a shelter, at 2950 &... What interventions are helpful, in changing public attitudes toward people who...
Scroll to top