Recent message from Colleen O’Marra (I’ve corrected my spelling of her name in previous blogs):

Thanks for the corrections on my name. I enlarged that wonderful 1949
aerial photo of Long Branch by the way. It really gives you a better
perspective of the Colonel’s farm especially and I can pinpoint our
home above LakeProm and spot the Long Branch Hotel through the trees.(
my mother called the hotel, The Pogoda in the 1920s)Small Arms Open
House was so crowded, I didn’t get a chance to show you the
poster-sized aerial shot. On your walk next year, this photo would be
very handy.( Colleen M. O’Marra)

Update: With regard to my note (see below) about the Fair Grounds Organic Cafe & Roastery building, I’m pleased to share the following comment from Colleen O’Marra:

It’s wonderful to know of the great details that knowledgeable site visitors are able to pinpoint at the November 1949 photo – which you can see in an enlarged version if you click, and then click again, on the image (see above).

I always learn new things from the comments. Some time – I hope – I’ll get around to looking at other aerial photos of the area that are available online.

We’re looking forward to a great Long Branch Jane’s Walk on May 3 and 4, 2014, starting at 10:30 am at the East Parking Lot at Marie Curtis Park on each of those days.

Colleen, your mention of the 1949 photo reminds me that for the 2014 walk, I’ll ensure we have a huge enlargement available of it, on foam core.

In previous years I had a batch of foam core enlargements made of Long Branch scenes, to share at presentations and Jane’s Walks. However, the extreme weather event in July 2013 did a little work on them and they are now gone. For the 2013 Doors Open event, I had some new ones made. I get them made at Mr. Signs on Evans Avenue. 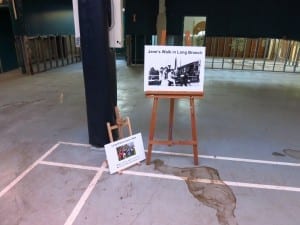 The two foam core photos that were on display at the Long Branch Jane's Walk table at the Sept. 28, 2013 Small Arms Doors Open. I set the easels in place early in the morning, before the tables had arrived. Jaan Pill photo

One panel – on the large easel in photo on the left – features an image from about 1927 featuring the Henderson motorcycle at the site of the radial bridge over Etobicoke Creek and No. 2 Highway. The photo is 18 by 24 inches – smaller (and less costly) than ones I’ve had made in the past, but large enough for the required purposes. It’s also easier to carry through a crowd.

The other panel – on the floor in photo on the left – featuring a May 2013 Jane’s Walk photo, is even smaller, namely 12 by 18 inches. I put that on a smaller table-top easel. Again – it’s just the right size.

I’ve learned from experience with displays (as a display organizer, and the observer of large numbers of display tables over the years) that it’s good to keep text information – on foam core displays and handouts – brief and to the point.

I’m really pleased that the building at the corner of Fortieth Street and Lake Shore Blvd. West, visible in the 1949 photo, has now found a great adaptive reuse as a Fair Grounds Organic Cafe & Roastery location. At one point, as I understand, the building was a bank. There used to be many, many banks in the area – again, as I’ve heard. We much appreciate the support of Fair Grounds in the organizing of our annual Long Branch Jane’s Walk. 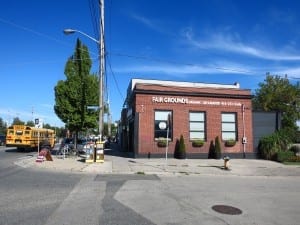