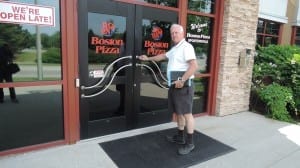 Peter Mearns (MCHS '63). June 16, 2014 in Kitchener at a Boston Pizza near the 401. Jaan Pill is reflected in the window. You can enlarge these photos by clicking on them. Jaan Pill photo

Our most recent Malcolm Campbell High School 60s Reunion organizing committee meeting took place on June 16, 2014 in Kitchener. Our previous meeting on May 21, 2014 was held at the same location. Peter Mearns, Lynn Legge, and Jaan Pill attended the meeting.

Please note that this report is subject to correction or revision.

My purpose in writing these minutes is to inform you about what was discussed – and also so that you can offer your own input regarding the planning process. We welcome your comments and suggestions.

The next organizing committee meeting in Kitchener will likely be in September.

During the summer, or in the early fall, we anticipate that we’ll also have at least one informal get together in Toronto, which any and all Toronto-area MCHS graduates are welcome to attend. We have not yet chosen a date or location.

As well, please note that an informal MCHS mini-reunion will be held in Montreal on Aug. 13, 2014 (that is, this summer).

Peter Mearns reported that Old Mill Toronto has set aside the date of Oct. 17, 2015. It doesn’t cost anything to set it aside, for now. As noted earlier at this website, a price of $125 for a one-person ticket or $200 for a couple is the price range we are thinking of for tickets. That’s a minimum, and we may have to go higher than that. We are aware, however, that some attendees will be travelling from afar. They will have all kinds of other expenses aside from the price of tickets.

We aim to come out even on the reunion. We have no reason to make a profit on the event.

As well, we have two ballrooms set aside for the reunion, meaning that we have an upper limit of about 300 attendees. Once the tickets go on sale, it will be First Come, First Served. After that, there’s going to be a waiting list. 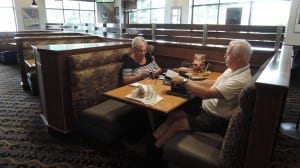 Lynn Legge noted that Old Mill Toronto and other hotels in the neighbourhood are not able to give us a defined price for block reservations until within a year of the event.

Lynn added that there are about 50-odd rooms at the Old Mill. These are very comfortable for one person or for couples, but would not be the optimal arrangement if, say, three or four classmates decide to bunk together. There are, however, other hotels in the area, with a wide range of prices and accommodations.

The deposit for the meeting rooms is 20 percent of the total bill, whatever that amount will be, which we’ll know when we get closer to the wire. So, at this point we have to think about where that deposit will come from.

We seek an accountant

We are working toward finding an MCHS grad who is an accountant, who can handle the money, organize it, and help us figure out how much we need.

Peter Mearns reviewed an extensive lists of contacts, that we will follow up on, from the MCHS Reunion in Montreal in 2000. Howard Hight and Diana Redden are doing a great job in development of a database of MCHS Sixties alumni. If you wish to add your name to the database, please contact Howard Hight at hahight@gmail.com

Subsequent to the June 16, 2014 meeting, Jaan Pill met with Bruce Walden of Walden Design in Toronto. Walden Design will be able to set up a secure payment system on the Preserved Stories website. Registrants for the reunion would fill out a registration form online, and purchase their reunion tickets, at the latter site. Our next step is to set up the payment system and an online registration form.

We noted that people with an interest in the reunion will be able to keep informed of news updates through the Preserved Stories website and the MCHS ’60s Reunion Facebook Group that has recently been launched. We will ensure that emails sent out through an email distribution list will be few in number, to ensure that MCHS grads do not end up receiving more emails than they have the time and interest to read.

Sit down meal or buffet? 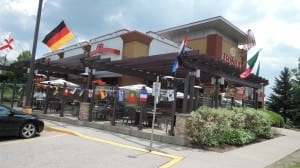 Our recent MCHS '60s Reunion meetings were held at a Boston Pizza near the 401 in Kitchener. The flags outside the restaurant are in celebration of the opening of the 2014 FIFA World Cup. Jaan Pill photo

Peter Mearns mentioned that on the drive to Kitchener from Toronto, he and Jaan Pill had  reviewed the discussions that had been held to date regarding the format for the reunion. Peter noted:

Lynn Legge noted that for people who are vegetarians, a buffet makes the matter of food selection very easy. Peter Mearns noted that at the MCHS Reunion in 2000, there were specified tables, and people organized their own tables.  Having specified tables has some advantages, but it also takes away a degree of flexibility.

For example, if you meet someone that you were’t expecting to meet, it’s easy to arrange to sit with them when you’re at a buffet. You just find a seat where you can sit with your friend and you chat while you eat. When seating arrangements are set beforehand, a last-minute arrangement of this kind is not feasible.

Jaan added: “And is that the extent of the experience? I would want something much more than that. And so I think the buffet idea makes a lot of sense. Yeah.”

Format of the reunion 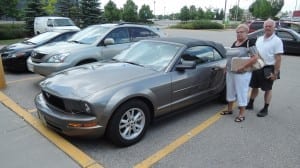 We ended our June 16, 2014 meeting with a visit to Lynn Legge's impressive Ford Mustang, parked outside the Boston Pizza. Jaan Pill photo

With regard to the format of the reunion, we discussed plenty of related topics – social hierarchies in high school and in life in general, and the persistence, years later, of high school cliques. These are great topics for discussion; I will outline, in a separate blog post, some of the great ideas and insights that we shared about these enjoyable topics.

Lynne Legge also spoke of a work reunion that she attended at a country club. They had high tables around the outer edge of the room during the cocktail hour. These are tables that are a handy place to place a drink, or a purse, or whatever, when you’re talking with people.

That avoids the balancing act that occurs when you have a drink in one hand, food in the other, and so on. As well, for people who like to talk with their hands, the high table is a great place to put your drink while you’re talking.

The high tables can be discreetly removed when the meal gets under way.

The high tables serve to make it easier for people to intermingle than may otherwise be the case. It’s great when people have opportunities to work the room.

Howard Hight and Diana Redden have been sharing updates, including with regard to the Montreal MCHS mini-reunion on Aug. 13, 2014 (that is, this year) using Classmates.com as a platform. That has been working out well. The volunteer work that Howard and Diana are doing on behalf of the reunion is highly valuable and much appreciated.

Please contact us if you can help out by lending us the required yearbooks.

The aim is to ensure that when you talk to somebody, you know which classmate you are talking with. As has been noted, occasionally what we look like changes when we’re talking about a timespan of 50 years.

We’ve encountered a wide range of comments about this topic, as in: “I looked a hell of a lot better back then than I do now!” Or: “Well, I figure I’m the only one that hasn’t changed!”

In this regard, we noted at the June 16, 2014 meeting that what people often recognize at once is a person’s voice. Some people recognize voices more quickly than they recognize the face that goes with the voice. 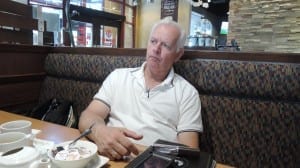 Peter Mearns mentioned that, along with a yearbook photo and graduation year, it would be great to mention on a name tag what line of business a person was in over the past 50 years. Lynn Legge added that it would be great to include information about volunteer interests and pursuits as well.

Peter Mearns spoke of a situation where, say, two friends from high school both ended up in the publishing business. It may turn out, when they run into each other 50 years later, that they were not only in the same business, but were also competing against each other. Such discoveries make for great conversations.

Please let me know if this overview requires corrections. We welcome your input and questions regarding the reunion planning process.

Changes in the Toronto newspaper landscape: June 23, 2014 Torontoist articl... Question from Lynn Berry about bagel shop at mall on Sources where they have...
Scroll to top