In the following Q & A with Graeme Decarie, I’ve added some headings for ease in reading of the text.

Jaan Pill:  You worked for CBC and private radio for quite a few years. I would be interested in your comments (for my website) about a recent article by Linden MacIntyre:

Why I Left The CBC And Its Toxic Atmosphere

As well, I would be interested in any comments you may have about the earlier history of Cartierville-Ahuntsic including the role of the Sulpicians in early Canadian history as outlined in a comment at this post:

With help from Peter Halliday, we’ve located an archival photo of Raimbault Creek near the Back River

Another earlier post highlights some of the early history of Cartierville-Ahuntsic:

Graeme Decarie: The story on the CBC is a gentle one. In fact, all the news media of North America have crashed. On the private side, all of them are owned by a handful of billionaires – and they simply publish propaganda for billionaires. That’s true of the New York Times, the Toronto Globe, all of them. In general, private radio isn’t worth a poop, and never has been. It simply can’t afford the number of people it takes to cover even city news.

As for CBC, I was there when it was still in its good years. But it’s quite true that the French side was dominated by separatists who were quite open about their bias, and used the newscasts to broadcast separatist propaganda. On the English side, I got fired for becoming too prominent on the federalist side of the debate. (The CBC has always been vulnerable to political pressure for years.)

I remember covering a big, anglo rally in my CJAD days with Jim Duff. I was on a balcony of the Sun Life building looking down at Dominion Square where Chretien was speaking. Standing beside me was a sniper of his body guard. A radio carrying French CBC reporting on the rally was somewhere behind me.

It announced its official rally count of some 40,000. And that was simply lying. Every journalist knows that Square holds 80,000 at least – and it was jammed. As well, the streets were jammed for as far as I could see. There were at least a hundred thousand people at that rally. Jim Duff almost exploded when he heard the radio announce the estimate of 40,000. 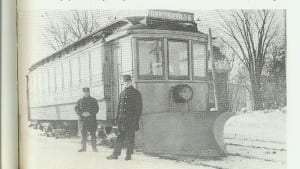 Archival photo of Cartierville streetcar, which Eric Karbin has located online. There was a connection between the original tramway and the 17 Streetcar.

The material on early Cartierville is, to the best of knowledge, quite accurate – and the citation of Margaret Conrad as a source is pretty reliable. (She was in the same MA class as I was.)

The railway did, indeed, have a profound effect on where the rich lived. Until the last days of the 19th century, they lived where they worked, down around St. Jacques St., and gradually moving up the hill to St. Catherine where they built Canada’s Protestant answer to the grandness of Catholic cathedrals – St. James Methodist (now United) church. And beyond that to Sherbrooke St.

But the railway had destroyed that congregation even before the the church was built. The railway made it possible for the rich to live in a more pastoral area they would call Westmount. There, they bought land from the Decaries who either owned or controlled a vast area stretching west and north all the way to Dorval.

Jean Decarie arrived in 1651 when the population of Montreal was just over 400. When his first son was born, de Maisonneuve was his godfather, and Jeanne Mance his godmother. Then he got a farm in what became The Glen railway yards in NDG where Montreal’s English superhospital was recently built. (The basement of his house was discovered while clearing the polluted soil from the site, and I had a chance to go into the basement for a TV show just before it disappeared into a dump truck.)

Many of the Decaries became wealthy with urban expansion. While their ancestors were taught by nuns in the old Fort that still stands at the head of Fort St., the newly rich ones could attend expensive private schools which were, and still are, the passport to the upper classes for French Catholics. I might have inherited some of that wealth if my great grandfather had had the wit to marry a nice, French Catholic girl. But the damn fool married a Scots Presbyterian. So I ended up born into a two-room flat in Villeray.

The railway made it possible for some of the very rich to live year round near the water in Cartierville. I believe that Christopher Plummer’s family lived there – as did Sir John Abbot, a prime minister. And those with money still had room left out there for summer cottages.

Oh, one of the Decaries who lived in St. Laurent early in the 1900s, was Reverend Xenon Decarie, who is now being considered for sainthood. I expect the pope will be contacting me for advice. 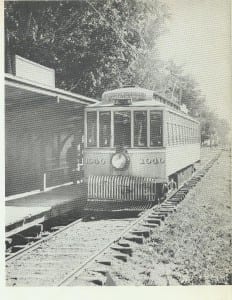 Photo of Cartierville streetcar that Eric Karbin located online. He notes: ‘I found the picture of a streetcar that went to Cartierville all the way down to Gouin Bd. (before there was a building for the terminus about 100 meters south, situated between Grenet & Ranger Streets). I’m missing the caption that the image had when it was posted on the Belmont Park website (now under construction) but as I recall, it said the photo was taken in 1896. The sign of the streetcar reads: “Around the Mountains, St. Laurent & Cartierville”.’

Further details about the early 1900s polo club (originally called the Back River Club, as I understand) in Saraguay can be accessed here.

Background about the history of polo as a sport can be accessed here and at this post as well.

Additional details regarding the history of Saraguay and St. Laurent – with a particular focus on major roads – is available here.

The related, broader topic of the British empire can be accessed here.

From time to time when I was growing up in Montreal, I learned bits and pieces about Chateauguay, whose role in Canadian history – in particular, as the site of a decisive battle in the War of 1812 – has recently been a source of interest for me.

Graeme Decarie has also shared additional information, as a comment at an earlier post, about the configuration of the caddy shack at Marlborough golf club. He’s also added a comment regarding Miss Keddy.

Eric Karbin has shared the following note about the 17 Streetcar, which I remember often taking from Snowdon in the 1950s for the ride to Cartierville.

In my search for the photo of the #17 streetcar at the end of the line next to Gouin, I found my own comment from 4 years ago at:

Re: Many people of course remember the 17-Cartierville streetcar as leaving from Snowdon Junction or later from Garland Terminus on its route to Cartierville and Belmont Park. Few realize the route was actually much longer in earlier years.

The #17 Cartierville streetcar’s route ended in Cartierville, near (but not at) Belmont Park. Belmont Park (which first opened in in 1923) was about a 5 minute walk from the end of the #17 line. The end of the line was originally (1896) at Gouin Bd & Grenet St. The street car didn’t turn around from here; it simply went in reverse.

In 1925, the end of the line was relocated to the newly built Cartierville Terminus building, on a strip of land lying between Grenet St. and Ranger St., about a 100 yards south of Gouin Bd. #17 streetcars would travel in a loop which went past the terminus. Few realize the #17 had gone further north as far as Gouin Bd.

I lived in Cartierville for years and never realized this until much later when seeing a picture on this website:

Unfortunately, this website [about Belmont Park’s history] is now “under construction” so I can’t find the photo there now. It was taken in 1896.

17 Streetcar from Snowdon to Cartierville in the 1950s

I remember a terminus in Snowdon, where I would get on the 17 Streetcar to get to Cartierville when I was attending events organized by an Estonian church in Snowdon or thereabouts. It’s been about 60 years since I regularly travelled along that route. The area is familiar, in my memory, in the way that some imagined location is familiar because it appears in a person’s recurring dreams.

Much has changed along the route between Snowdon and Cartierville. What remains for me are a few glimpses of visual and other memories of the ride: sunny days, bright colours, a sense of forward progress, the views from the windows. It was a more interesting experience than when travelling by car.

It was a friendly, clunky kind of streetcar. Eventually I would get off the streetcar and walk home. It might have been quite a walk. I did a lot of walking everywhere.

“Why I Left The CBC And Its Toxic Atmosphere” – Linden MacIntyre,... Veronica Foster the Bren Gun Girl was a non-smoker, except on the occasion of...
Scroll to top