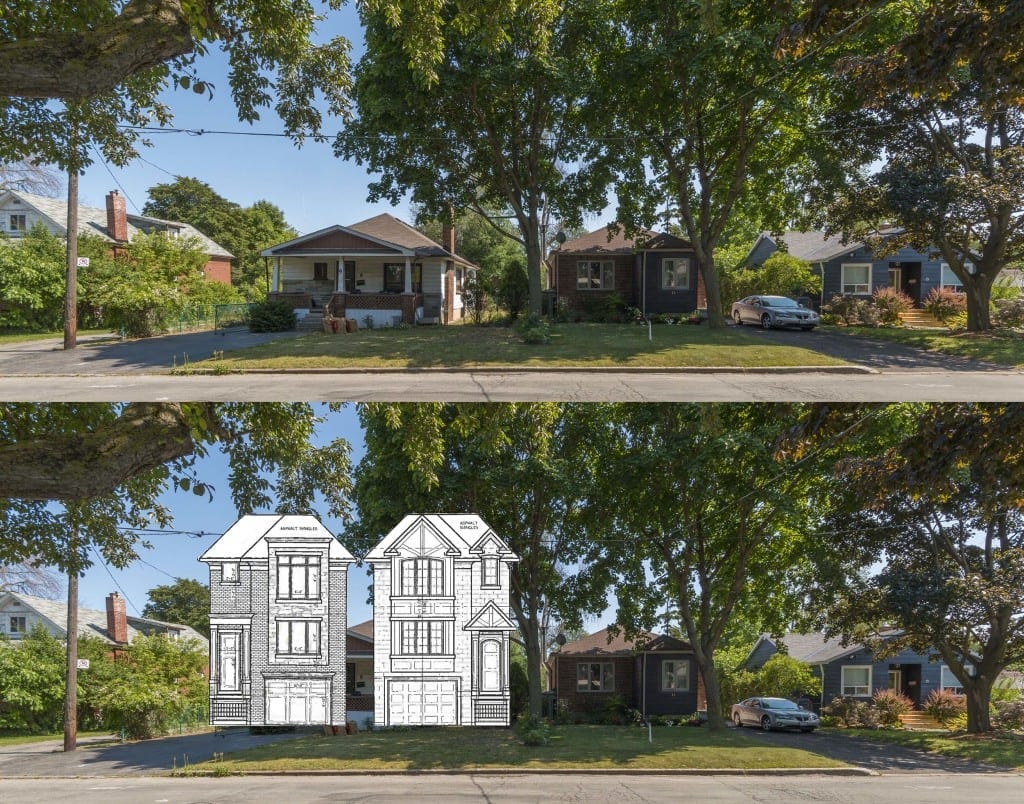 The following message is from David Godley of Long Branch:

This information is not available for Etobicoke York on line currently so no details are given.

The change over to digital applications will improve service soon so that elevations can be viewed online.

Committee of Adjustment Staff will make the information available at their counter in the interim.

2 Shamrock. Severance and variances for two 3 storey soldier houses from 0.35 density to 0.62.(4pm). This could mean 6 soldier houses in a row since 4 Shamrock has been appealed to the OMB (October 17 hearing).

The neighbourhood has been shocked by Planning Department’s comments on 9 Meaford severance and variances.

The Department has no concerns about two 3 storey soldier houses at 0.70 (double the density permitted) on a low density street.

This issue has become a lightening rod for Planning’s future role. Is this a “one off” or a new strategy.

This is particularly surprising in view of the Planning Act’s recent inclusion that “A sense of Place” is now a consideration for all planning issues.

In addition the OMB have twice ruled that where a proposal exceeds a feature of an area eg 3 storey compared to existing 2 storey, this does not match the test of respecting and reinforcing character.

This is referred to as the “parameters” test.

July 29, 2016 letter from David Godley [headings have been added, for ease of online reading]

Trust you are making the most of our summer weather.

Thank you for Jennifer Keesmaat’s letter dated 11 July [see below] and undertaking presence of Urban Design staff at the 9 Meaford community forum.

I am still trying to come to terms with the consistency of the 9 Meaford Planning comments. I am sending this letter without full information as to why the comments seem so different to previously. If I have made incorrect assumptions please let me know.

I suspect the change of direction in Planning Department comments (on 9 Meaford) must have come from an administrative source.

I also suspect this is a new strategy rather than a “one off”. The community will be interested in Planning comments on future applications.

I can see the Department and the City is making limited headway with the OMB in that 70% of refusals supported by Department (and local community) have been approved by the OMB (erroneously in my opinion). The OMB therefore is responsible for lots of valuable planner time having little impact.

The old axiom that appearance/aesthetics is not part of planning is rampant at the OMB because they have little comprehension of urban design.

There are 11 pages of policy on Urban Design in the Official Plan and the Neighbourhood policies are mostly about the third dimension.

Planners also often do not have urban design training, especially the development-oriented planners; or they are hiding it well!

There is no input from the City’s Urban Design section on severance and variance applications.

So the whole thrust of the Official Plan, including direction of density away from neighbourhoods, is being lost. And so is the character of Long Branch.

Another issue raising its head in Long Branch is that there is an overall problem with leaking basements due to underground streams, so much so that owners have to pay increased insurance premiums. I believe this has been taken up by our Councillor.

However there is cause for hope in that we now have an enlightened chief executive at the helm of ELTO and therefore OMB. [Note from David Godley in response to question from Jaan Pill: ELTO (Environmental and Land Tribunals of Ontario) is the umbrella group for OMB, Assessment Review Board, etc.]

Bruce Krushelnicki is actively participating in the Province’s Review of the OMB, even proactively initiating consultations of his own. There is a possibility of real change.

Also the LAB process should kick in shortly and promises to be fairer. Repeat refusals in line with the Official Plan would staunch the flow of new applications.

In OMB decisions PL151145 and 150665 there is an analysis on character respect and reinforcement.

Both decisions draw on the parameters of the existing neighbourhood development and find that going beyond the parameters is not in accordance with the Official Plan.

For example if there are no 3 storey houses in an area of consideration then a three storey house does not meet respect and reinforcement of neighbourhood character.

The community depend almost entirely on the Planning Department to be able to shape their neighbourhood.

At present the citizen, who is most impacted, has the least say.

The Planning Department having no concerns about applications, such as 3 storey soldier houses, leaves the community, the Councillor and the overall City in the lurch.

If the “U turn” comments are based on administration then at least the Department’s stand should be neutral.

Perhaps increase in severance application fees could enable staff to carry on defending the Official Plan.

Without Planning staff attending appeal hearings the Department has no accountability.

Also for specific staff I believe they are having to compromise their planning principles.

I am still pushing for detached houses with secondary suites as a solution to splitting lots.
Affordable housing and one person households with “accessibility” are the needs of the future.

25% of households here are single and increasing; in Scandanavia they are heading towards 50%.

A single person suite with verandah in a neighbourhood is the socially acceptable solution. In addition there is no incentive for an applicant to compromise at a community forum.

Any recommendations from the Urban Design Guidelines Study will be emaciated.

I am particularly interested in the process. Without a sound process we will never have sound planning.

Sometimes it seems like one step forward, two steps back.

If you have any information or comments that could help I would appreciate receiving them.

Thank you for your email dated June 30, 2016. I understand through communication with West District Planning staff that this was a very difficult application and that much thought and consideration went into arriving at the position. I appreciate your concern and want to assure you that a fulsome review was undertaken against all of the relevant policies in the Official Plan, including in particular, Section 4.1.5. Staff also reviewed the application for conformity with the new Neighbourhoods policies adopted through Official Plan Amendment No. 320.

Although Staff were of the view that the application met the requirements outlined in the Planning Act, due to the community concern in Long Branch, staff recommended a deferral for a community meeting, which the Committee of Adjustment concurred with at the July 7, 2016 hearing. This will provide members of the community an opportunity to discuss concerns and potential revisions with the applicant. Your point regarding involving Urban Design staff is well taken. Urban Design staff will assist at the upcoming community meeting (date to be determined).

I am very pleased to hear that the Neighbourhood Urban Design Guidelines Pilot Project in Long Branch is off to a great start. I truly appreciate your participation in this important initiative. The design guidelines will assist neighbourhood associations, community groups, home owners, and land owners interested in redevelopment as well as City Staff, the Committee of Adjustment and City Council in assessing future proposals in terms of how they will ‘fit’ with the context and existing neighbourhood character.

Thank you for your continued involvement.   Your participation is valued and is of great assistance.

How to read the streets of Long Branch: Urban Design Guidelines Pilot Project is now underway

You can find additional posts by searching for “Long Branch Urban Design Guidelines” at the Preserved Stories website.

A significant and valuable July 29, 2016 Guardian article by Stephen Hawking,... Where can one get a Stop the Lot Splitting – Preserve the Character of...
Scroll to top