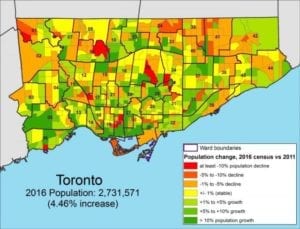 Population change between 2011 and 2016 by percentage by census tract, Toronto. Source: This Statistic Canada image is available from varied sources, including on Twitter as well as the Urban Toronto article for which a link is provided at the page you are now reading.

A February 2017 CBC interactive article is entitled: “Census 2016: Did the population in your hometown shrink or grow?”

A Feb. 12, 2017 World Economic Forum article is entitled: “5 charts that show what is happening to the middle class around the world.” I learned of the link through a Clarkson Today Twitter post, which has a link to a share by Sven Spengemann @SvenTrueNorth (Member of Parliament, Mississauga-Lakeshore).