I was very pleased to learn recently that Sawmill Sid Inc. will be “the highlight, or one of the co-highlights anyways,” on April 6, 7, and 8, 2018, at the Green Living Show at the Metro Toronto Convention Centre. 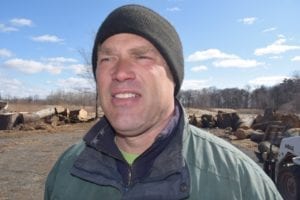 The purpose of the event, as Sawmill Sid explained to me in a brief interview at a woodlot, near the Small Arms Building in Mississauga on April 1, 2018, is to provide education “about carbon capture in urban wood.”

“We encourage everyone,” Sid added, “who’s involved in green living, to come down to that show, and see us, and support us.”

I’ve been following the work of Sawmill Sid, a small-scale portable sawmill operation involving wood repurposing in the Greater Toronto Area, for some time. 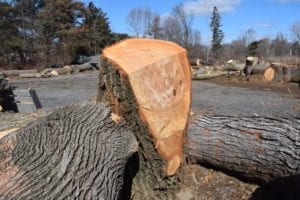 Among its ongoing operations, Sawmill Sid has been working along with Toronto and Region Conservation, at the site of the Small Arms Building, in connection with an emerald ash borer infestation that has killed millions of ash trees in southwest Ontario and the Great Lakes States.

The ash borer gets in between the bark and the trunk of ash trees and kills them. The trunk itself is unscathed and thus the wood can be reclaimed. 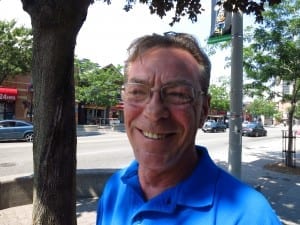 Inevitably, our conversation turned to Jim Tovey, who passed away unexpectedly on Jan. 15, 2018.

Jim Tovey was a strong supporter of Sawmill Sid’s work at the Small Arms Building – and of sustainability in all of its possible formats everywhere.

“I was very unhappy,” Sawmill Sid remarked during our recent conversation, “when our greatest supporter, Jim Tovey, had passed away because he would’ve been very proud to know that we were gonna be a highlight of the Green Living Show this year. That would’ve just made his day.”

Beware of a private house sale to a developer: You may not be getting the best... Councillor Mark Grimes sums it up, prior to Nov. 14, 2017 Etobicoke York Community...
Scroll to top