We were saddened to learn, from Nicole Halpert, Garry Halpert’s daughter, that her father, who taught at Malcolm Campbell High School in the early 1960s, has passed away. 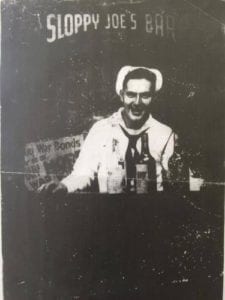 The text of an April 11, 2018 obituary published in the Montreal Gazette reads:

Thy life’s a miracle. ~ King Lear

English and History teacher at Westhill and Malcom Campbell High Schools, Garry Halpert passed away peacefully at St-Mary’s hospital on April 5, 2018, surrounded by his family. Born in Cleveland, Ohio, Garry was an optimist who loved life to the fullest. We are convinced his inquisitive mind, creativity and sense of humour, was what kept him on this planet for almost 92 years! Garry was a fan of literature, musical comedies, Italian films and Shakespeare. “You should never leave the house without a Shakespeare in your pocket”, he once said. His closest childhood friend Lenny Polster passed away last summer and we are certain both Cleveland boys are in Heaven playing basketball and having a good laugh. We should celebrate Garry. He was not one for melancholy and sadness. A modest get together will take place Saturday, April 14 from 2 p.m to 5 p.m. at Kane & Fetterly 5301 Décarie. Special thanks to the staff at Lev-Tov Residence who cared for him during the last year of his life, especially to Trevlyn. Anyone wanting to make a donation in his name, could donate to St-Mary’s hospital foundation: stmaryshospitalfoundation.ca/

I have added, to the above-noted post, the following great information from his daughter:

“He loved jazz (chet baker, toni bennett) + classics such as Night and Day: he remembered all the words of this type of song.

“And he loved musical comedies but I think Night and Day is a good one!”

As well, Nicole Halpert has shared the following thoughts, from a former student, regarding Garry Halpert’s inspiring, and life-changing, impact as a teacher:

“One of his former students from Westhill came by the funeral: it was touching to hear how he had changed her life actually by encouraging her and inspiring her with Shakespeare!”

I’m pleased to note, as well (because such comments inspire me tremendously, as a volunteer keen to help out as best as I know how, with keeping memories of MCHS alive amongst all of us), that Nicole has added: “hats off to you for doing this website. He would have loved it had I known about it then.”

The Order of the Templars was a powerful, militarized monastic order which arose... Work has begun on Jane’s Walk in Long Branch, led by MPP Peter Milczyn,...
Scroll to top