Aspects of Enlightenment thinking are  problematic – they give rise to real-world, dystopian science-fiction scenarios

At a recent post, I’ve spoken of how news reporting (as in mass-circulation print journalism) demonstrates a connection to gangster literature.

In the event the topic interests you, the global history of newspapers, with a focus on the nineteenth century, is highlighted at a valuable study entitled The Transformation of the World: A Global History of the Nineteenth Century (2014) by Jürgen Osterhammel.

Among other things, Osterhammel speaks (p. 35) of the rise of the mass-circulation press, which “mirrored their age more than they analyzed it.”

Geert Mak regrets a turning away from Enlightenment ideals; is the regret warranted?

At the same recent post, I’ve also referred to an article by Geert Mak at his website, entitled “2017 as a year of truth.”

At the latter article, Mak, whose best-selling, beautifully written overviews of the history of Amsterdam and dramatically altered Dutch countryside I much admire, argues that current problems facing Europe and the United States reflect a turning away from the ideals of the Enlightenment.

Such a view – that a return to the ideals of the Enlightenment provides a pathway out of current pressing issues facing Europe, America, and the world – may be problematic.

Unity of mind and body is a non-Enlightenment concept

There are aspects of the Enlightenment that make good sense.

The history and legacy of the Enlightenment warrants close study.

Among the aspects of the Enlightenment that James C. Scott, whose work I discuss below, explores, for example, is its role as a centralizing force in Central Europe; its espousal of equal citizenship; and its less than illustrious role in state-level efforts to engage in the social engineering of vast populations.

Two problematic aspects of Enlightenment thinking come to mind for me at once.

On one level, the Enlightenment took a wrong turn in its tactic of introducing the concept – which became the firmly held tenet – of a mind-body split.

I have spoken of this topic at a previous post, in which I note that evidence has been accumulating of a close connection between mind and body. Such evidence contradicts the view put forward by the French philosopher René Descartes.

In Crooked: Outwitting the Back Pain Industry and Getting on the Road to Recovery (2017), investigative journalist Cathryn Jakobson Ramin notes that Descartes “had proposed a theory that neatly separated the mind from the body, in an effort to dispel the idea that pain and sickness were evidence of demonic possession,” (p. 180).

Dealing with demonism was a commendable, necessary, and life-saving Enlightenment project, but the resulting splitting of mind from body hasn’t been helpful.

The configuration of mind and body as separate entities is, furthermore, not the only problematic feature of thinking emerging from the Enlightenment (as it is called).

In Seeing Like a State: How Certain Schemes to Improve the Human Condition Have Failed (1998), James C. Scott explores other problematic applications of Enlightenment concepts.

Scott argues, in Seeing Like a State, that the state – through the application of abstraction, simplification, and rationalization – needs to look at, and measure, certain things.

In such a process of looking at things, the state is in a position (generally until disaster of one kind or another eventually emerges, because, in the end, reality resists simplification) to ignore the rest of the reality that exists, at the local level distant from the centres of power.

The state’s capacity to thereby do great harm, through application of selected Enlightenment principles, is in my view the underlying theme of much of James C. Scott’s work.

Let us consider how this theme applies to land use, as an illustration of the lens Scott brings to his analysis of how, on occasion, states catastrophically organize state-level projects.

Shifting agriculture is a non-Enlightenment concept, based upon detailed knowledge of local conditions

Let me choose at random a discussion (pp. 282-83) from Seeing Like a State in which Scott addresses permanent fields versus shifting cultivation, in the context of rural settlement and production.

The permanent field – which, visually speaking, appeals to a Westernized sense of order, uniformity, and tidiness –  represents Enlightenment thinking, as I conceptualize it.

In contrast, shifting cultivation is concerned with a view of the world, a way of perceiving reality, that is not indebted to the Enlightenment.

The ecological caution of shifting cultivation, in other words, was the reason behind the appearances that so offended development officials. Rotational bush fallow had a good many other advantages that were rarely appreciated. It upheld the physical properties of upland and hill soils which, once destroyed, were difficult to restore. The rotation itself, where land was abundant, ensured the long-run stability of the practice. Shifting cultivators rarely removed large trees or stumps – a custom that limited erosion and helped the soil structure but that struck agricultural officials as sloppy and unsightly. With some exceptions, swidden plots were cultivated by hoe or dibble stick rather than plowed. To Westernized agronomists, it appeared that the farmers were merely “scratching the surface” of their soils out of a deplorable ignorance or sloth. Where they encountered farming systems involving deep plowing and monocropping, they believed they had encountered a more advanced and industrious population. [57] The burning of the brush accumulated in clearing a new swidden was also condemned as wasteful. After a time, however, both shallow cultivation and burning were found to be highly beneficial; the former preserved the soil, espe­cially in areas of high rainfall, while the latter reduced pest popu­lations and provided valuable nutrients to the crop. Experiments showed, in fact, that burning the brush in the field (rather than hauling it off) contributed to better yields, as did a carefully timed burn. [58]

My tentative conclusion is that, as well as speaking of gangster literature and film noir, we can say that news reports (about topics including climate change, income inequality, and populism) are also closely related to the genre (including graphic novel and comic-book versions of it) that is known as dystopian science fiction.

As I understand, Margaret Atwood’s recent novel is related to such a dystopian genre.

Of particular interest to me is the matter of Westernized land use as a contributor to climate change.

The topic of land use is discussed at length in a recent United Nations Intergovernmental Panel on Climate Change (IPCC) report: 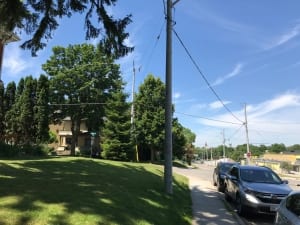 Trees play a role in attenuating the climate crisis. That being the case, this post includes this photo featuring impressive, mature trees along a streetscape in Stratford, Ontario. Jaan Pill photo

To be precise, the document is entitled:

Echoing themes addressed in the above-noted United Nations special report of Aug. 8, 2019, a Sept. 16, 2019 Guardian article is entitled: “$1m a minute: the farming subsidies destroying the world – report: ‘Perverse’ payments must be redirected to measures such as capturing carbon, report says.”

The public is providing more than $1m per minute in global farm subsidies, much of which is driving the climate crisis and destruction of wildlife, according to a new report.

Just 1% of the $700bn (£560bn) a year given to farmers is used to benefit the environment, the analysis found. Much of the total instead promotes high-emission cattle production, forest destruction and pollution from the overuse of fertiliser.

The security of humanity is at risk without reform to these subsidies, a big reduction in meat eating in rich nations and other damaging uses of land, the report says. But redirecting the subsidies to storing carbon in soil, producing healthier food, cutting waste and growing trees is a huge opportunity, it says.

The report rejects the idea that subsidies are needed to supply cheap food. It found that the cost of the damage currently caused by agriculture is greater than the value of the food produced. New assessments in the report found producing healthy, sustainable food would actually cut food prices, as the condition of the land improves.

A Sept. 17, 2019 New Yorker article is entitled: “Money Is the Oxygen on Which the Fire of Global Warming Burns: What if the banking, asset-management, and insurance industries moved away from fossil fuels?”

The opinion piece places climate change within the context of the present moment; an excerpt reads:

Around the turn of the century, a California-based environmental group called Rainforest Action Network (ran) was trying to figure out how to slow down the deforestation of the Amazon. It found that Citigroup, then the largest bank on earth, was lending to many of the projects that cut down trees for pastureland, and so it ran a campaign that featured celebrities cutting up their Citi credit cards. Eventually, Citigroup joined with other banks to set up the Equator Principles, which the participants call a “risk management framework” designed to limit the most devastating lending.

“Nature must be used to repair broken climate”

More economic growth will not repair the planet. In her speech at the United Nations, Greta Thunberg aptly commented: “You have stolen my dreams and my childhood with your empty words. We are in the beginning of a mass extinction and all you can talk about is money and fairy tales of eternal economic growth. How dare you.”

A Sept. 26, 2019 CBC article is entitled: “Quebec’s environmental movement has had a long string of victories. What’s the secret to its success? The movement has grown steadily for more than a decade and is about to stage its biggest protest yet.”

There is an alternative to ‘eternal economic growth’

A Sept. 26, 2019 CBC article is entitled: “Greta Thunberg was right: There is an alternative to ‘eternal economic growth’: Climate activist called endless economic growth a ‘fairy tale,’ but it may depend on how you define growth.”

Canadian economist and author Peter Victor, who studied at UBC and taught at Toronto’s York University, says that conflict between words and investment is the crux of the collision between the traditional way of thinking about business — the idea of investing for endless growth — that has to be overcome to stop climate change.

And clearly, for most economic thinkers trapped in the long-held view that boosting GDP with industrial growth is the most important job for governments and business, Victor’s newly reissued book Managing Without Growth: Slower by Design, Not Disaster may be difficult reading.

“Most economists would really take the position that there is no choice: If you don’t have growth, the system would collapse,” said Victor this week from a cabin somewhere near Algonquin Park.

Well, I think governments generally like geometry. It all comes from Versailles. But that doesn’t mean that all seats of power are always designed in this geometrical fashion. New York is not the political capital of the United States, but it’s probably the primary seat of economic and cultural power. In many ways, outside the political, New York is the capital of the United States. And if you think about Manhattan, it’s the complete antithesis of a design based on a single, necessary, geometrical order. What you have instead is a grid in which every point is the intersection of two coordinates, which is to say that every point is as good as any other. If you look at Manhattan on a map, it’s just kind of a blank geometrical space in which you can do anything at all. As I see it, it emphasizes, rather than a single necessary political or social order, infinite possibility. And that’s a completely different design.

Can you help us figure out WHERE IN LONG BRANCH this July 1915 photo, featuring... A City Mobilizes: Toronto and the Second World War – Sept. 20, 21, and...
Scroll to top