I spoke about my experiences as a person who stutters.

I explained how I had moderately to severely stuttered from the age of 6 until I was 41, at which time I attended a treatment clinic in Edmonton.

I told about the time, around my late teens, when I phoned someone and tried to say “Hello.” In those days the “H” sound was at time next to impossible for me to say. After about thirty seconds of trying to say “Hello,” I had hung up the phone. The students could appreciate how that felt.

I explained how, after the clinic, I made many presentations, but each time a voice inside me would say, “You’re not supposed to be able to do this. You’re supposed to be falling flat on your face.” I explained how that voice really bothered me. At first I thought I should get some psychotherapy. Then I decided what I needed to do was to compare notes with other people who stutter.

That prompted me to form a self-help group for people who stutter in Toronto. After a year, I realized the voice was telling me I needed to adjust to some changes that had occurred in my life. After that, the inner voice never bothered me again. In the years that followed I was involved in the founding of the Canadian Stuttering Association.

In answer to questions, I said that stuttering appears to be a neurological condition, that it runs in families, and that in my case I didn’t get teased a lot because I stuttered — because I had a sharp tongue, even though I stuttered, and had the demeanour of a child who was capable of dealing with teasing or anything else.

I also explained that the treatment that worked for me — in which I learned what I like to call Fluency as a Second Language — works for about 80 percent of people who stutter. For the remaining 20 percent, one can learn to modify how one stutters so that a person is able to communicate more effectively, even if they stutter.

I also told the story of Michael Niven, a Calgary lawyer who in his early thirties in 1987 was out of a job as a lawyer because he stuttered. He had a wife and child to support, and a mortgage on a house in a posh area of Calgary. He attended the ISTAR (Institute for Stuttering Treatment and Research) clinic at about the same time I did, twenty-five years ago.

He returned from the Edmonton clinic to set up a successful Calgary law firm and now likes to spend weekends pretending to be a farmer at his quarter-section ranch outside of Calgary. As I understand a quarter section is a quarter of a square mile.

As part of a fact-checking process (I always like to ensure what I post is accurate), I’ve asked Michael Niven to check the above paragraph to ensure it is accurate.

“Sounds about right,” he reports, “although when I’m done playing farmer I do like to sit in the hot tub and look at the sky.” 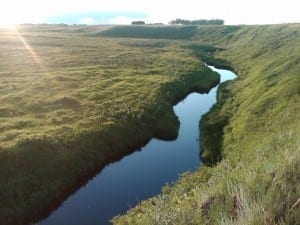 Here’s a picture of Michael’s place. In the fall when the river goes down there are many ancient buffalo bones exposed every year.

There were great questions from the class. I much enjoyed this visit and look forward to returning to read the children’s book, Hooray for Aiden, to the class once I find my copy of this book by Karen Hollett about a girl who stutters.

I also explained to the class that if they do a browser search for “Jaan Pill Vimeo” they can find an online video based on one of my presentations in April 2011.

I very much enjoyed meeting this class of great students. I am pleased that Mme. Warburton invited me to make this presentation to her class.

Wonderful to know of recent career award for Ken St. Louis of West Virginia... Zita Cobb made a fortune in business and moved back to Fogo Island, Newfoun...
Scroll to top