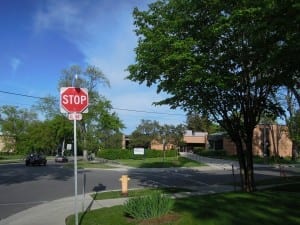 The event had a good turnout

Gary Miedema of Heritage Toronto did a great job of coordinating the publicity for this event, one of a series of 1812 lectures occurring this year across Toronto.

Gary Miedema is Chief Historian and Associate Director at Heritage Toronto. He’s also the author of For Canada’s Sake: Public Religion, Centennial Celebrations, and the Re-making of Canada in the 1960s (2005) and teaches in Ryerson University’s School of Continuing Education. He has a blog at the Heritage Toronto website.

This was a lecture, well over an hour in length, a format that was aptly suitable for the occasion.

Each person attending such an event will bring away different insights and reflections, depending on their ways of seeing history.

My own interests include broad themes that relate the past to everyday life in the present moment. The details of individual lives are of interest to me, provided I can picture such lives in a wider context.

Each person in each generation perceives and interprets history anew — based on (a) the prevailing worldview of one’s era, (b) a given person’s worldview, and (3) the archival and other evidence that is available.

A key part of the presentation was based on archival research about Etobicoke residents who served in militia units, in battles outside of Etobicoke, during the War of 1812.

Denise Harris has prepared a document, which will be avilable as an attached file, with details about the residents, including the story of their families, land holdings, occupations, and lives after the war.

The individual stories involved a backstory about life in Upper Canada two hundred years ago.

Part of the backstory concerns the world history of warfare.

One can say that much has changed in the technology and conventions of warfare in the two hundred years that have elapsed since the War of 1812.

Denise Harris spoke of an Etobicoke militia member who lived into his nineties, despite injuries incurred during the war. In this soldier’s case, musket balls had caused multiple wounds; one musket ball had remained lodged in his skull behind the ear.

The presence of the musket ball was especially aggravating for this individual, it was reported, when there was a change in the weather.

What comes to mind is that as the technology of firearms evolved, nusket balls gave way to more powerful ammunition. The Etobicoke resident with the musket ball lodged behind his ear was fortunate, one can say, that in the War of 1812 musket rifles had not yet been replaced by rifles firing high-calibre bullets.

The same soldier appears in a photo of a War of 1812 reunion in Rosedale, held in about 1861, as I recall from the lecture.  His posture and demeanour suggests that, close to fifty years after the war, he continued to stand tall, both figuratively and literally.

He’s an archetypical Canadian survivor – which brings to mind Northrop Frye’s observations about Canadian mentalities in the May 2012 issue of The Walrus Magazine.

(a) “provide all that their members have in the way of distinctly human values,”

(b) “are compelled to feel a great respect for the law and order that holds them together,” and

(c) are “confronted with a huge, unthinking, menacing, and formidable physical setting.”

The article by Kyle Carsten Wyatt notes that other writers, including Margaret Atwood, in Survival: A thematic guide to Canadian literature (1972), explored the larger of Frye’s “garrison mentality” concept. Some writers contested the concept.

Years later, in 1989, according to The Walrus article, Frye commented that the special historic context of his concept had been lost sight of in discusion of the garrison mentality.

He added that, as he understood it, “a garrison brings social activity into an intense if constricted focus, but its military and other priorities tend to obliterate the creative impulse.”

He concluded that for most of the late-twentieth century, the garrison mentality had been replaced by “the condominium mentality, which is neither social nor creative, and which forces the cultural energies of the country into forming a kind of counter-environment.”

I look forward to learning more about the worldview that one can imagine may have been possessed by typical settler residents of Etobicoke 200 years ago.

I look forward as well to learning more about the worldview of aboriginal peoples who travelled and hunted in the area starting over 10,000 years ago at the end of the last ice age.

The lecture also spoke about the destruction of the forest that had covered Etobicoke when settlers first arrived. If I recall correctly from the talk  – this will require fact checking, to ensure my memory serves me well – in 1812 perhaps 95 percent of the land was forest covered, whereas now the coverage is in the range of around two percent.

In order to survive on the land, settlers first cleared the forests. Tree stumps would be everywhere, including on roads after they were cut into forests. After some years, varying according to the species of tree, the stumps would rot and could be removed. Some roads began as aboriginal trails.

Dundas Street was an early road. An earlier version travelled south of the Glacial Lake Iroquois shoreline. A later version travelled along higher ground along the ridge above the Glacial Lake Iroquois  shoreline. Changes in the route of Dundas Street in turn affected the land through which the new version passed, with consequences for the landowners, some of whom included War of 1812 veterans.

When I think of the forest that used to exist across Southern Ontario, including Etobicoke, I think of a recent book by Bernard Krause, The great animal orchestra: Finding the origins of music in the world’s wild places (2011.) One can picture that the ‘music of the wild’ in 1812 would have been a most interesting sound to experience, for those who may have been inclined to listen to it.

With reference to the concept of a garrison mentality, a March 2015 World Affairs article is entitled: “The Downward Spiral of Putin’s Garrison State.”

Champlain’s Dream (2008, p. 203) highlights the garrison mentality in early North American history: “He [Champlain] called it [the settlement at Port-Royal, 1605-07] the fort. These men were always thinking of military defence – not against Indians but European attackers. Their experience of incessant war at home inspired a habitual sense of insecurity.”

Mental imagery, as Frank Thomas and Ollie Johnston explain in their 1978 talk... The conventions of warfare have changed since 1812
Scroll to top