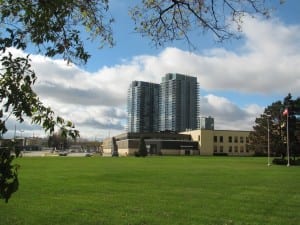 [Please refer to more recent updates regarding the Mr. Christie’s Bakery story. What you are reading here was posted some time ago.]

Mondeléz Canada has requested a review of the City of Toronto Official Plan review of the Mr. Christie’s site at 2150 Lake Shore Blvd. West to consider other uses such as commercial and residential. This is not, as I understand, a rezoning application but a request to review the site under the official plan.

Persons wishing to make comments or statements regarding the proposed review of the City Official Plan for the site at 2150 Lake Shore Blvd West, with a focus on what uses they envision as appropriate or inappropriate, and why, can send comments by Canada Post or email to:

You can find the Official Plan at this City of Toronto website. 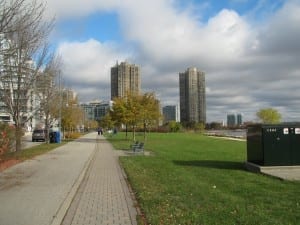 Humber Bay Shores is not treated as a neighbourhood separate fro Mimico for planning purposes, as I understand.

As noted in a blog post on December 23, 2011, Humber Bay Shores reportedly has a particular and distinct Official Plan in place.

The latter community also has a Precinct Plan developed for traffic flow in that area. This is, as I understand, already part of the official record, discussed with the local community and approved by Council, and is not (so far as I know as I write this) part of the Mimico 20/20 planning process.

A City of Toronto document, dealing with an unrelated earlier matter regarding the Mr. Christie Bakery, offers a good selection of mapping/aerial photography information related to 2150 Lake Shore Blvd. West: 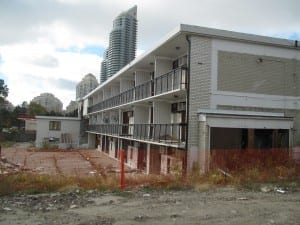 The Beach Motel, at 2183 Lake Shore Blvd. West, is currently being demolished.

To get a sense of what is under way in Humber Bay West, aside from what may be planned for 2150 Lake Shore Blvd West, it’s useful to consider the current plans for 2183 Lake Shore Blvd. West, located south of the Mr. Christie’s site. The following document, dated January 27, 2012, provides an outline:

The developer’s project is outlined at the urbantoronto website. The Eau Du Soleil Condos development features 44- and 66-storey towers.

Peter Riedel, who has earlier shared information on related topics, has brought my attention to the Humber Bay shoreline and Humber Bay Park West.

I recall reading a New York Times article about how the Toronto skyline produces a high number of casualties for migratory birds.

As the article notes, Toronto with its downtown skyline of tall glass-walled buildings is considered a top contender for the title of the world’s most deadly city for migratory birds.

Riedel notes that the tall buildings that are going up in Humber Bay Shores are close to Humber Bay Park, which he describes as a migratory park.

He expresses concern that, as he sees it, the Humber Bay shoreline will soon be in constant shadow, because of the tall buildings going up in Humber Bay Shores.

This would appear, to my knowledge, a straightforward matter to verify with Google Sketchup. 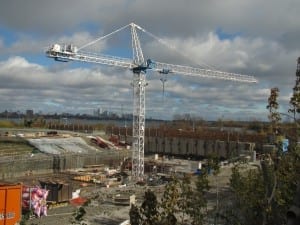 “I do real estate photography,” says Riedel, “so I’m literally all over the GTA, from Oshawa  to Oakville and Vaughan. And nowhere in this city is there such a concentration of height, of condos — aside from the downtown core, Mississauga and downtown core Toronto. Nowhere else.

“And look where it is, right on the water, right on the bird migratory route. They seem adamant on building as many of these glass towers as possible.”

Update: A Feb. 15, 2014 Globe and Mail article is entitled: “Aggressive development: Inside the building and selling of a Toronto condo tower.”