In a previous blog post I’ve shared information about a church-to-condo conversion at 152 Annette Street in Toronto. 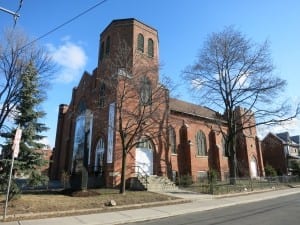 In this blog post, part of a series of posts connected with the Wesley Mimico church-to-seniors-residence proposal, I will focus on a church-to-condo conversion highlighted in a March 28, 2013 Toronto Star article. [To access the article, click on the link in the previous sentence.]

A City of Toronto staff report provides information regarding reasons to designate the site under the Ontario Heritage Act. [Click on link in previous sentence to access the report.]

The latter report, dated June 12, 2012, is from the Acting Chief Planner and Executive Director, City Planning Division, to the Toronto Preservation Board and the Toronto East York Community Council.

The following excerpt from the above-noted document provides an overview of the narrative connected with 243 Perth Avenue: 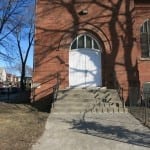 In October 2011 Official Plan Amendment and Site Plan applications were filed for the property at 243 Perth Avenue. City staff were concerned with several issues including the extent of interventions to the heritage building and the design of the new adjacent building.

After discussions with City staff, the applicant submitted a revised proposal that addressed staff’s concerns. The current application proposes alterations that will have a lesser impact on the historic church than originally proposed and the proposed new building has been redesigned to better complement the historic church.

It is proposed that the historic church building be converted to residential use and that a new four-storey residential condominium building be constructed on the existing vacant parking portion of the property at the north side. The two buildings are proposed to be linked at the side (north-west) entrance porch of the church. 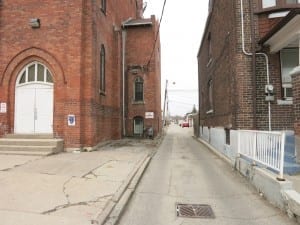 A new glazed vestibule is proposed to connect the historic church to the new building at the north face of the existing gable- roofed entrance porch.

The new four-storey building is proposed to be constructed of red brick and situated in a manner that aligns with the adjacent houses along Perth Avenue and steps back toward the historic church. 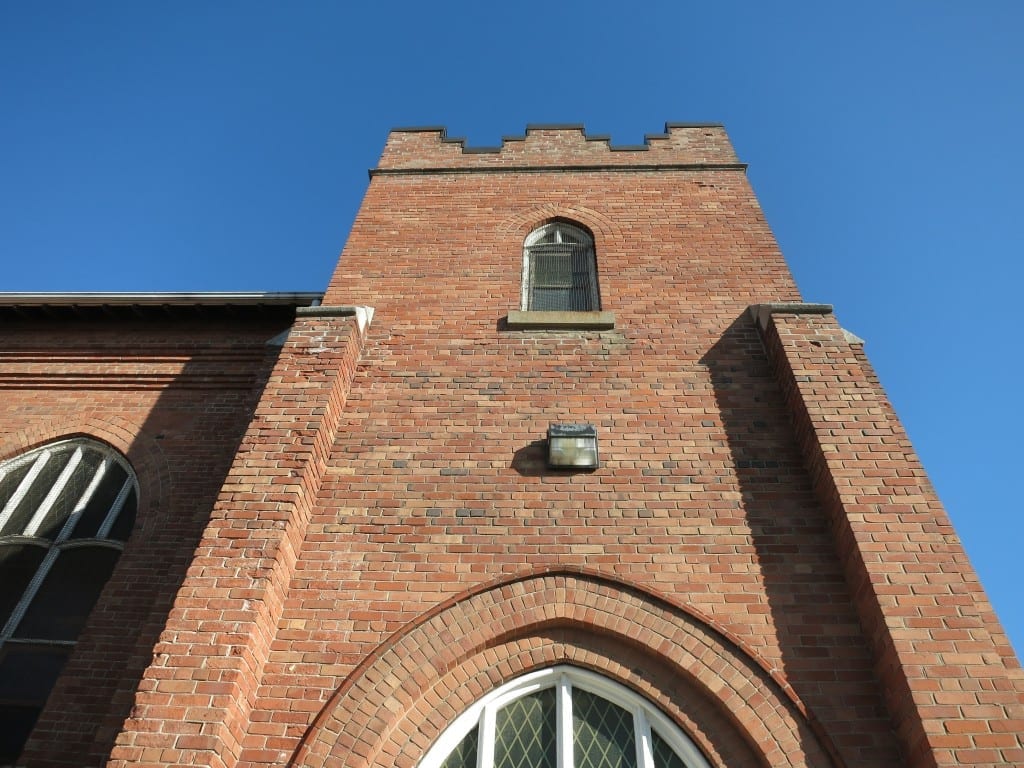 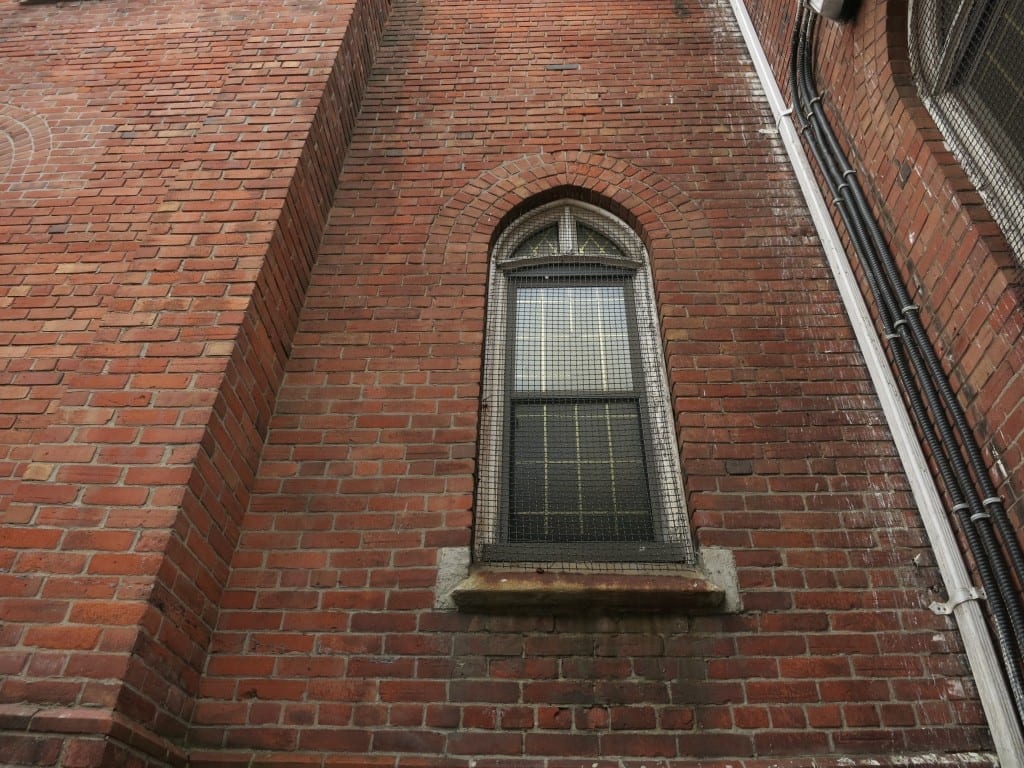 The presence of a new four storey building in this location will obscure most of the alterations proposed for the north elevation of the church. The connection between the two buildings will be glazed and will occur at the side entrance porch of the church allowing the original fabric to be visible and the historic church building to be read as separate from the new building.

The alterations proposed for the building’s primary elevations on Perth and Wallace Avenues have minimal impact due to the mitigation measures that have been incorporated into the overall design of the project such as massing, use of materials and colour, and the retention of the building’s heritage attributes such as pointed arch window openings, gable roof, towers, gable-roofed rear wing and side entrance and turret.

Conservation of key elements of the building is also proposed and will include exterior masonry, stone and wood mouldings. 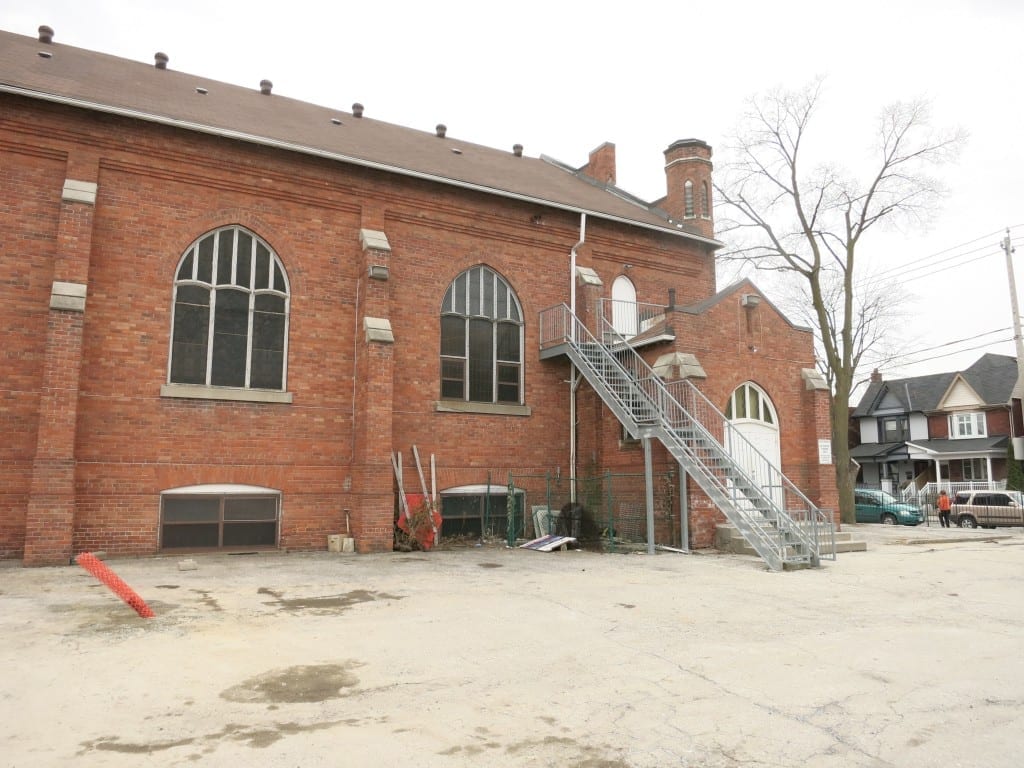 Staff find the proposal to rehabilitate the historic church building necessary in order to maintain its continued use since the original use is not sustainable. The essential form, fabric and details of the building will be maintained while accommodating new interior residential functions.

A location map (Attachment No. 1) and photographs (Attachment No. 2) are attached. Staff have completed the attached Heritage Property Research and Evaluation Report (Attachment No. 15) and determined that the property at 243 Perth Avenue meets Ontario Regulation 9/06, the criteria prescribed for municipal designation.

The property at 243 Perth Avenue is worthy of designation under Part IV, Section 29 of the Ontario Heritage Act for its cultural heritage value, and meets the criteria for municipal designation prescribed by the Province of Ontario under the three categories of design, associative and contextual values.

Located on the northeast corner of Perth and Wallace Avenue, Perth Avenue Methodist Church (1913) is a fine representative example of a church with Neo-Gothic styling by the Toronto architectural firm of G. M. Miller and Company that stands as a local landmark in the neighbourhood known as the Junction Triangle. 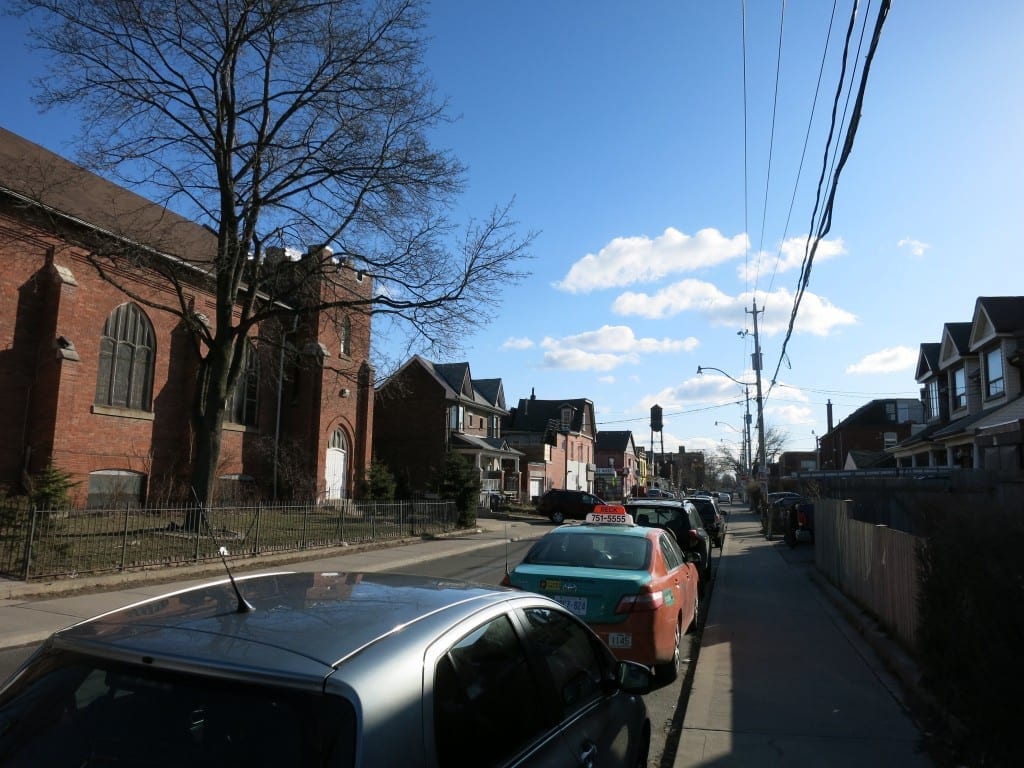 A second excerpt from the above-mentioned document outlines the reasons for the designation of the building under the Ontario Heritage Act:

Reasons for Designation: 243 Perth Avenue – Attachment No. 14 (Statement of Significance)

The property at 243 Perth Avenue is worthy of designation under Part IV, Section 29 of the Ontario Heritage Act for its cultural heritage value, and meets the criteria for municipal designation prescribed by the Province of Ontario under the three categories of design, associative and contextual values. Located on the northeast corner of Perth Avenue and Wallace Avenue, the building was completed in 1913 as Perth Avenue Methodist Church. The site was listed on the City of Toronto Inventory of Heritage Properties in 2008.

Perth Avenue Methodist Church has design value as a representative example of an early 20th century church designed in a Neo-Gothic style. Distinguished by the use of medieval-inspired elements such as pointed-arch openings, buttresses and towers, the style was popular for churches in the early 1900s.

The site has been associated for nearly a century with congregations of the Methodist
Church in Canada, the United Church of Canada, and the Seventh Day Adventist Church.

According to the United Church Archives, the origins of Perth Avenue Methodist Church date to the late 19th century when a Methodist congregation was established in the neighbourhood northeast of Bloor Street West and Dundas Street West.

Perth Avenue Methodist Church was designed by the Toronto architectural firm of G. M. Miller and Company, according to plans dated 1910. After forming a private practice in the late 1800s, George Miller was noted for his association with Toronto’s prominent Massey family, for whom he co-designed Massey Hall (completed in 1894).

Contextually, with its prominent location on a corner lot, Perth Avenue Methodist Church is a local landmark in the neighbourhood northeast of the intersection of Bloor Street West and Dundas Street West. The community developed within the triangle outlined by the three railway lines that were extended through the district in the late 19th century, attracting factories, workers’ housing, and schools and churches.

The heritage attributes of the property at 243 Perth Avenue are:

The scale, form and massing of the church

The materials, with red brick cladding, and brick, stone and wood trim

The gable roof that covers the main body of the church, with coping and a chimney

The west façade on Perth Avenue, which features a monumental pointed arch window opening flanked by buttresses with weatherings

On the long side elevations (south and north), the pointed-arch window openings that are organized by buttresses with gablets

The tower at the southwest corner, which features entrances set in pointed-arch surrounds on the west and south faces, pointed-arch window openings above, beveled corners with stone detailing and, under the flat roof, a stone band course and paired openings with louvered shutters

On the southeast corner, the tower with a pointed-arch entrance on the south face, corner buttresses, pointed-arch window openings, and a flat roof with crenelles The fenestration on all the elevations, with segmental-arched openings in the basement level, and various sized pointed-arch openings above