I’ve used an H4n audio recorder for many years. It’s a delightful piece of equipment. I can say that it’s added tremendously to the quality of my life. I’ve recorded so many great local history interviews with this audio recorder, often in synch with a couple of HD video recorders.

I also use an Zoom H1 as a backup and for times when I want a smaller recorder, and where the sound quality isn’t as critical.

I always use a windscreen, even indoors.

I recently came across a review for the Zoom H6 with thanks to @philshapiro. 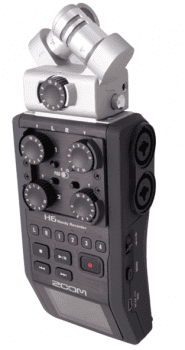