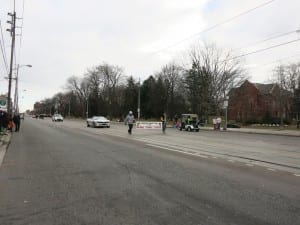 The Dec. 7, 2013 Lakeshore Santa Claus Parade began at Dwight Avenue at the Mimico - New Toronto border and passed by Colonel Samuel Smith Park (above) on its way to Long Branch. Jaan Pill photo

I was interested to learn that a recent police report related to Rob Ford’s activities mentions Colonel Samuel Smith (misspelled in the report as “Colonial Samuel’s”) Park.

The report notes (p. 22 in the PDF file, which is p. 51 of the original document) that the mayor fabricated a story in which he claimed to have lost the phone during a clean-up at the park.

The police report (see link in first paragraph) notes that the mayor indicated that he had lost his phone “when he was in Colonial Samuel’s Park in Etobicoke during a clean-up. He may have placed it on the hood of the car and it slid off.”

A Dec. 4, 2013 Global News timeline related to the phone can be accessed here.

A Dec. 5, 2013 Global News video includes footage of the clean-up at Colonel Samuel Smith Park, whose prominent features include The Assembly Hall, a multi-use community cultural centre featuring the adaptive reuse of a century-old heritage building.

The reference to “Colonial Samuel” is apt, I would say, because Colonel Smith was indeed a key player in British colonial history as it relates to Long Branch and South Etobicoke.

I was also interested to learn, from a conversation with a neighbour at the Dec. 7, 2013 Lakeshore Santa Claus Parade, that the above-noted police report mentions (p. 55 in the PDF file, which is p. 363 in the original document) that an address on Thirty Ninth Street near Lake Shore Blvd. West is identified as a location used by one of the surveillance subjects in the report.

The bungalow in question is one street east of the corner of Fortieth Street and Lake Shore Blvd. West, a corner that I’ve discussed recently with reference to traffic patterns and local history.

You can learn more about the Thirty Ninth Street property by doing a Google search for the address in question. Among the posts you will encounter is this one. [Click on link in previous sentence to read the post.]

I would not have learned about the newly renovated bungalow – it’s doubtful I would have gotten around soon to reading the full wiretap report – had I not learned about the building from a neighbour at the recent parade. The neighbour had learned of the address through an email from a friend who’d read the document.

A Dec. 19, 2013 Globe and Mail article seeks to place the ongoing story into some kind of context.